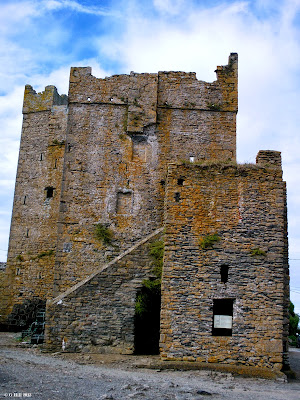 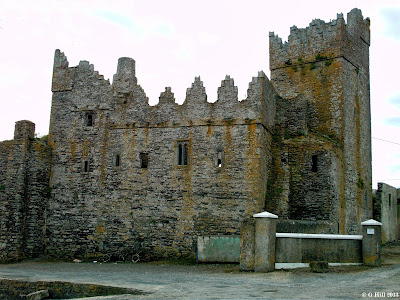 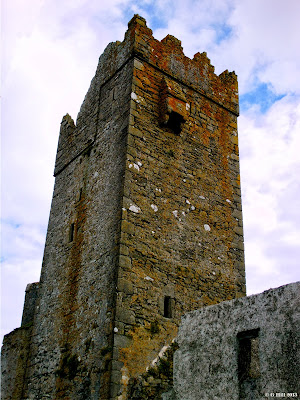 Above Image: The Tower with machicolation on top 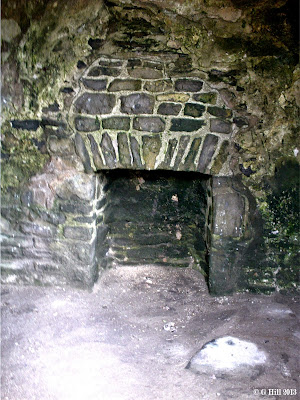 Above Image: A Fireplace within 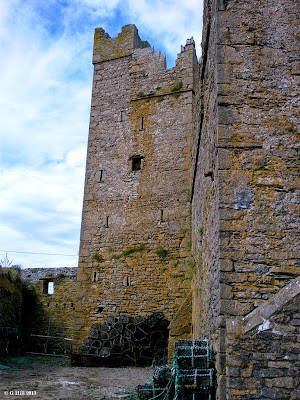 Above Image: Lobster pots at the rear of the Castle 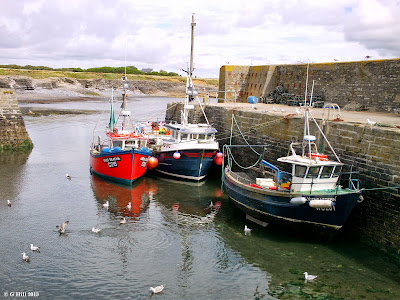 Above Image: View of the small harbour from the Castle 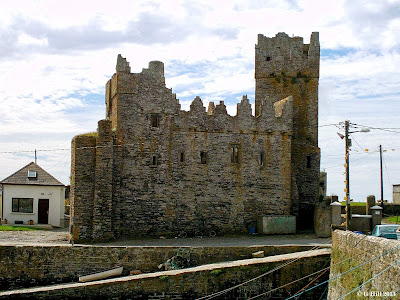 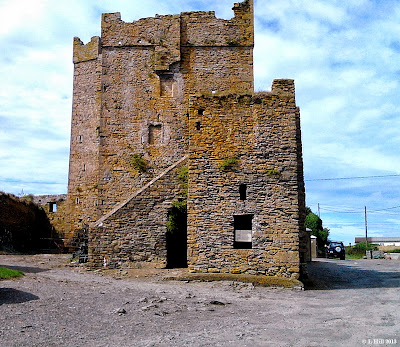 The tall crenellated Tower of Slade Castle was constructed sometime during the 15th century by the Laffans, a Norman family who had established themselves in the area. The fortified two storied hall was added in the 16th century also adding crenellations to the top making the Castle a most elaborate affair. The Laffan's ownership ended after the rebellion of 1641 and the Castle took on several guises thereafter including a storehouse for a thriving salt works during the 18th century and as a tenement house in the 19th century. The building was subsequently disused and was taken over by the OPW in the 1940's.
The Castle sits on the harbour side of the charming little fishing village of Slade. At one point there was a key holder but I'm not sure that is the case now as the interior we were told is at the moment inaccessible. However it is known that the Southern wall entrance in the Tower features a murder hole above it and the ground floor and third floor have vaulted ceilings. The Tower consists of four storeys with a mural staircase to the second floor.
The Castle's position on a pier gives it a commanding view of the Celtic sea and the nearby Bannow bay where curiously enough the Normans first landed in 1169AD
The inaccessibility to the interior is a tad disappointing but the exterior is interesting enough to warrant a visit if you happen to be in the area. When we visited it was a very picturesque scene, the tide was low and some of the small colourful fishing boats nearer the pier lay beached under the gaze of the Castle, lobster pots stacked neatly up against one of it's walls. If the Castle is under the auspices of the OPW it would certainly warrant opening to the public perhaps even as a museum to the Norman invasion and subsequent integration. I'm sure that access could be made to the battlements which would afford wonderful views of what is a very striking part of the country's coastline
To find Slade Castle take the N25 heading East from New Ross to Wexford Town and as you leave New Ross look for a turn right onto the R734 heading South. Take this turn and continue on this road until you have entered the Hook peninsula. When you have passed through Fethard-on-sea continue on for about 5KM following the signs for the Ring of Hook until you reach a staggered crossroads with a sign pointing straight ahead for Duncannon. Turn left at these crossroads and drive approx. 4.5KM until you reach a small roundabout (one of those that are painted on the road) and turn left again following the sign for the Ring of Hook. Drive for about 400m and the road turns sharply right. You will see the Castle directly ahead. Park safely anywhere along this road.
Posted by Castlehunter at 15:54