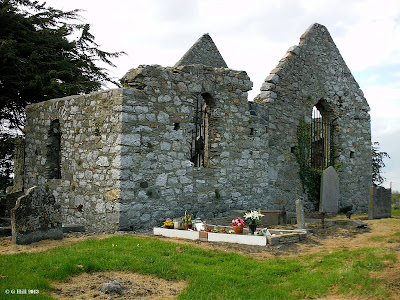 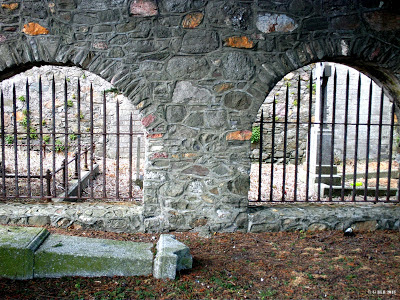 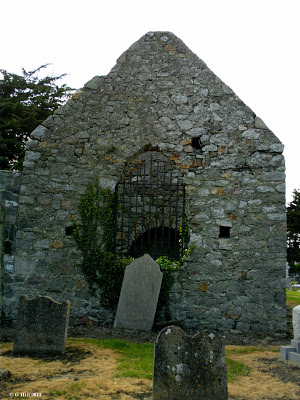 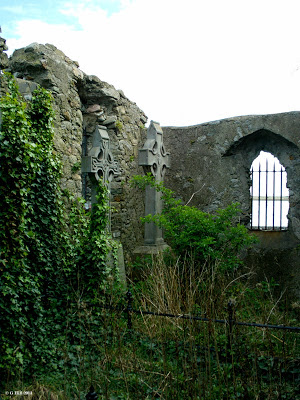 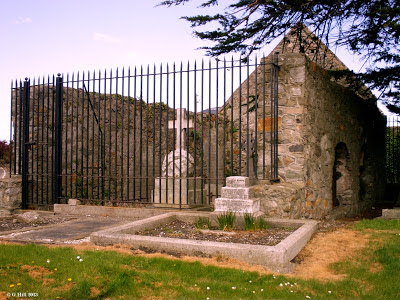 Above Image: The fenced west facing side 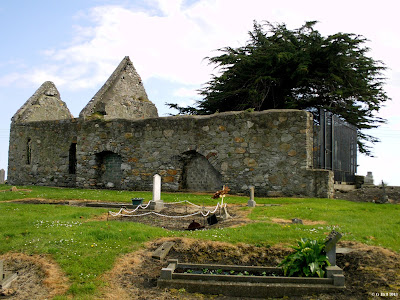 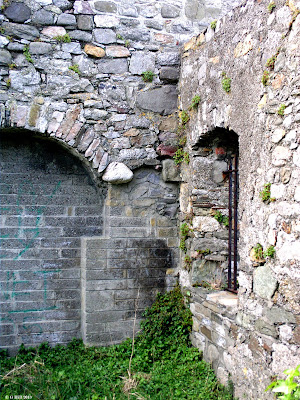 Above Image Part of the walled up central gable

This small unassuming coastal ruin was once of some importance to mariners as a place of succour following shipwrecks and maritime accidents.
It is thought to have been constructed in the 13th century and was at one time under the auspices of St. Mary's Abbey. Some records refer to it as "The Church of Mone"
Being built to assist mariners would account for its close proximity to the sea and for a long time all ships entering the bay in Dublin were subject to a duty which was passed on to aid in the maintenance of the Church. Seafarers being aware of the importance of this service would not likely to have been reticent to pay a small fee.
We came across these ruins entirely by accident on our way out to visit St Mary's Abbey in Howth and so decided to make a stop on the way back to take a closer look. Like many of these small Church ruins dotted around the country a great many go unnoticed by passers-by but after a period of time ruin hunting you seem to gain a bit of a keen eye for spotting them in your peripheral vision! This is a case in point as the structure lies on some raised ground within a walled cemetery and we only spotted part of it briefly jutting up over the boundary wall as we drove past. The ruins, accessed by a gate on the main road, are rectangular in shape with an East gable, central gable (now blocked up), a nave a chancel and an exposed West end which now has a large railed fence placed where the Western gable stood. I'm not sure of the significance of this railing other than to maybe protect some of the ornamental headstones lying within.
The foundations beneath this Church are believed to be considerably older as this area was originally the site of a Hermitage occupied by a Holy man called Bearog from which it is thought the name Kilbarrack evolves. (Cill Bearog or Church of Bearog)
The old burial ground contains the remains of some notable figures such as the so called "Sham Squire", Francis Higgins, who forged an upwardly mobile career through devious and unprincipled methods in the late 1700's and also Eoghan O'Neill the founder of the Gaelic League. The grounds are still used for burials to this day. Brendan Behan the great Irish writer referred to Kilbarrack cemetery in "The Borstal Boy" as "The healthiest graveyard in the country because it is so close to the sea"!
The Church would have commanded a fine view of the bay in its time and the sandbanks would have run quite close to it. Now the coast road divides it from the sea but it is still easy to imagine this being a windswept spot with the tide sweeping small boats inland carrying mariners in distress.
The Church appears to have fallen into ruin sometime after the dissolution of Churches and was indeed recorded as being overgrown with weeds in the 1837 topographical dictionary of Dublin.Worth a visit if you happen to find yourself in the area.
To find The Church of Mone, take the R807 from Dublin City towards Howth. About 6KM along you will pass a junction on your left with the R104 (Kilbarrack Rd). 200m further along you will see the boundary wall on your left. this is the graveyard containing the ruins. The pathway and road outside are wide enough for short stay parking.