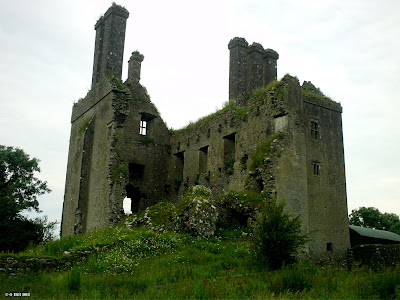 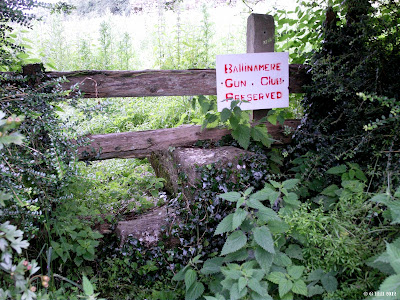 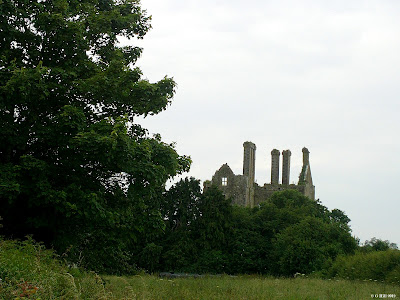 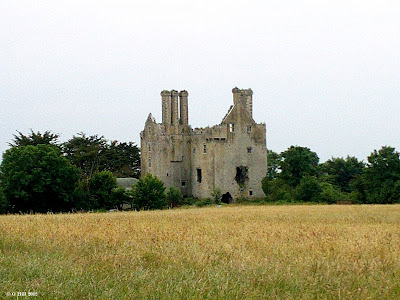 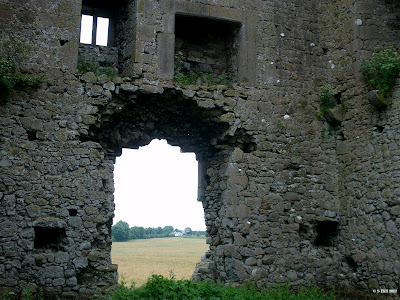 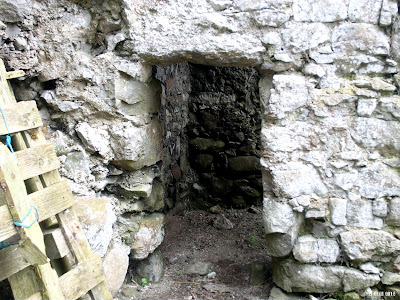 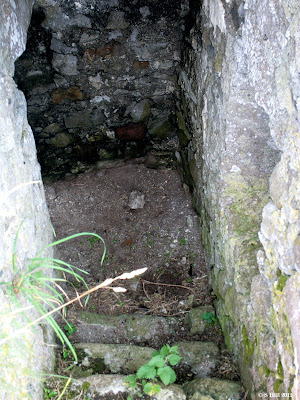 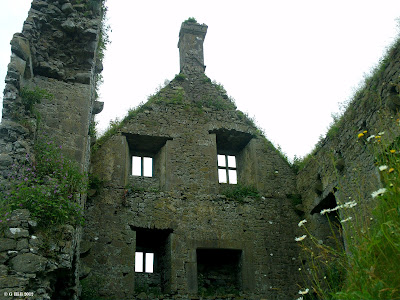 Below 2 Images: The Vaulted chambers beneath 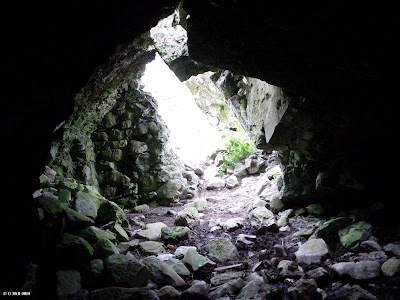 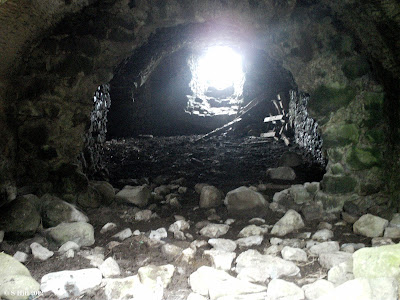 The ruins of Ballycowan Castle with it's tall striking chimneys stand loftily on elevated ground overlooking the Grand Canal  a few miles west of Tullamore. The large fortified house was constructed in 1589 by Thomas Morres on the site of an earlier Castle belonging to the O'Molloys which was gutted by fire in 1557.
The new Castle was extended upon by Jasper Herbert in 1626 and the Herbert coat of arms can still be seen on one of the gable walls.
The Castle's South West walls were destroyed during an attack by Cromwellian forces and the lands were handed over to the English crown and subsequently granted to the Earl of Mountrath in 1666.
The four storey Castle contains vaulted ceilings on it's ground floor rooms and mullioned windows are very much in evidence. The defences of the Castle included a machiolation above the entrance and a bartizan at its North east corner.
The Castle is accessible at two points. The section with the entrance door and evidence of a Bawn lies within a farmyard. There doesn't deem to be much Human activity there but it would be wise to seek permission first.
The other section lies in an open field beside the Tullamore River which runs under the canal. You need to walk down the old Canal towpath as far as the stone bridge. Just before this bridge there is a slope leading down to some scrub on the right. Here almost hidden out of view is a fence with rudimentary stile which is not too difficult to cross. There is a sign which states reserved for gun club (as was with Srah Castle, not too distant) but nothing forbidding entry. Once in the field you will find it overgrown and stony underfoot in places. Some of these grass covered rocks are more likely to be rubble from the Castle. There also appears to be a Bull in the field but he was at a reasonable distance on our visit and seemed indifferent to our incursion.
A slightly steep climb to the ruins in which care is recommended as the the long grass can be deceptive of what lies beneath, gives you access to the sunken floor of the Castle. Entry is through a gap in the wall. Within are two chambers with their barrel vaulted ceilings. There is another gap in the wall here leading to a third chamber but it has been somewhat shored up with rubble probably for safety reasons.
It's a great place to climb around and has a really creepy atmosphere within the vaulted rooms. There are probably more rooms to discover by way of the entrance on private land but that's for a future visit.
To find the ruins, take the R443 out of Tullamore towards Rahan. About a mile or so on you will reach a roundabout. Turn Left. Drive for approx. 2 miles until you reach  a left hand turn with a bungalow at it's corner  just before the main road takes a sharp bend right. Turn left by the bungalow and drive until you reach the bridge crossing the Canal. You can park your car on the immediate part of the towpath but be careful not to obstruct any gates.
Posted by Castlehunter at 16:13