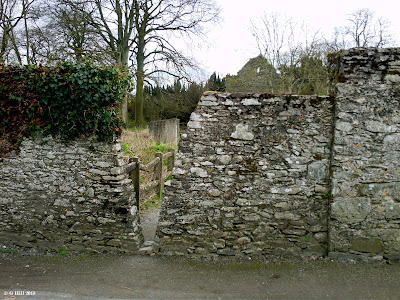 Above Image: The Roadside entrance 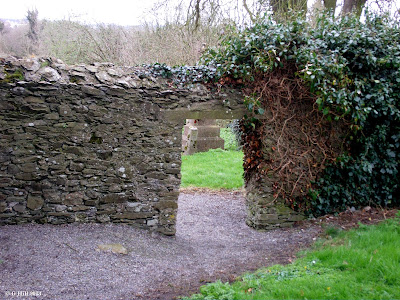 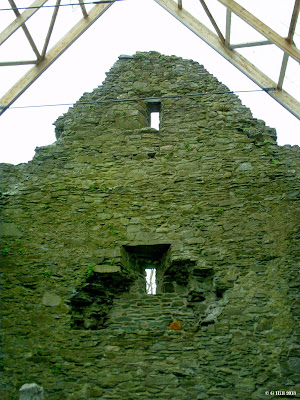 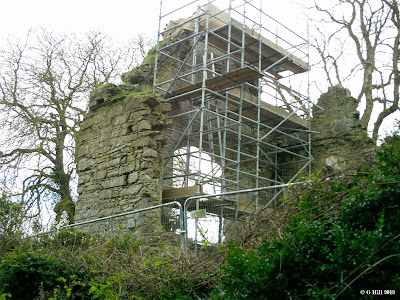 Above Image: Unsightly scaffolding but necessary for maintenance 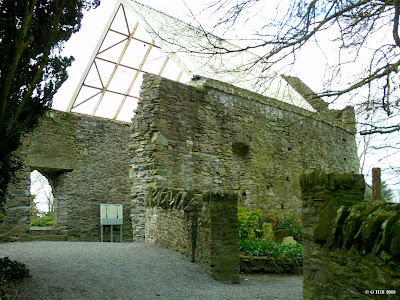 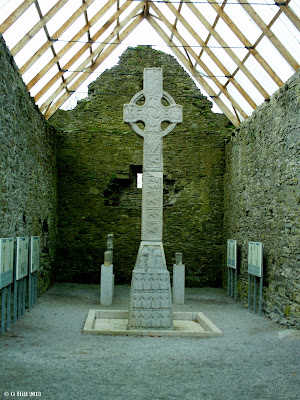 Above Image: The Moone High Cross 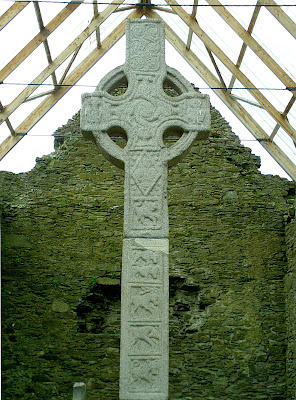 Above Image: Close up of the shaft 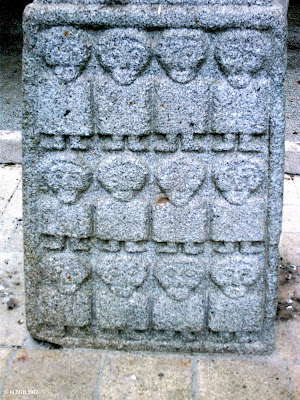 Above Image: The twelve apostles on the base 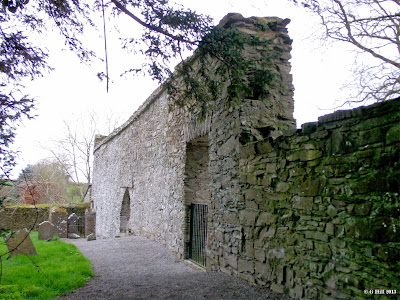 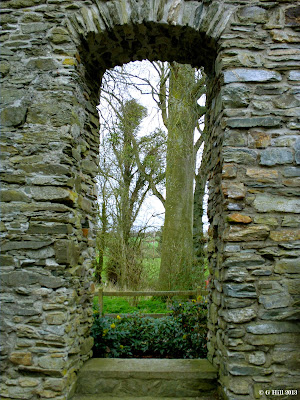 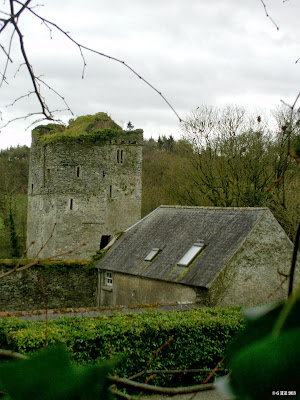 Above Image: Moone Castle viewed from
the Abbey graveyard 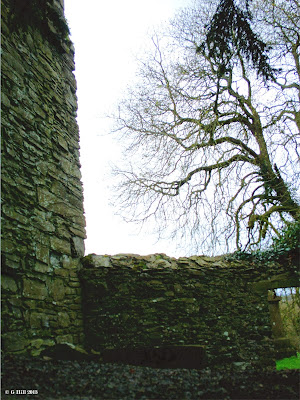 The area around Moone is one of the oldest settlements in Ireland dating back to approx 4000BC. A monastery was founded here by St.Palladius in the 5th century and dedicated to St.Colmcille and it continued to be a religious site from then on. The Abbey ruins date to the 13th century and contain within it's walls the famous Moone High Cross which dates to the 8th century. Constructed of granite in three sections it is one of the most decoratively carved crosses in the country. The Abbey was ransacked and burned along with the nearby Castle by Cromwellian forces in the 17th century and no doubt the High Cross suffered also. Two sections of it were rediscovered buried in the Abbey grounds in 1835 and re-erected in the Abbey by the Duke Of Leinster although the final missing section was not added until it's discovery in 1895 thus completing it's restoration.
Locating the ruins can be a little tricky as they are situated on a back road on the old Belan estate. The easiest way to find them is to locate the large pillared gateway in Moone village opposite the Post Office. Follow the road through the gates and it will lead you in the right direction.
The site stands alongside the River Greese and is accessed by a designated gap in the boundary wall by the roadside. A short walk brings you the ruins. Some recent work has been done here and a rather out of place looking glass roof has been added to part of the Abbey but this is in fact to form protection from the elements to the high cross within. The rest of the Abbey is open to the sky. While the ruins are not that extensive both gable ends survive and most of the walls. The Eastern gable sports a large window. Adjacent to the ruins is an ancient cemetery from where you can view the ruins of the nearby Moone Castle which is unfortunately on private land and inaccessible. The Castle grounds for any prospective trespasser also comes supplied with a large barking dog.
I suppose the main feature of the Abbey has to be the High Cross. It stands 5.3 metres high and is one of four original crosses which stood on compass points, North, South, East and West. This complete cross is the Southern one. The base and partial shaft of another stands now behind the complete cross while the remaining two are represented only by their bases and are semi-buried in field and woodland nearby.
The Moone High Cross is really amazing. Each aspect of the base and shaft are decorated with carvings depicting amongst others Adam & Eve, Daniel in the Lion's den and the twelve apostles. The shaft is carved with many animals, motifs and figures.
As mentioned there is only a shell of the Abbey left and there tends to be quite a bit of scaffolding around due to ongoing preservation which detracts a little from the overall view but it really is worth your time to stop and see the high cross. We visited on a March afternoon and there wasn't a sinner about. We also attempted to get near to the Castle but were thwarted by the Hillbilly doorbell (The Dog!)
To find Moone Abbey take the M9 motorway and at junction 3 take the exit and follow the R747 for Moone. After approx. 2KM you will come to a T-Junction with the R448. Turn right here and drive for approx. 3KM until you reach Moone village. Drive through the main street until you see the Post Office on your left. Directly opposite are the large pillared gates. Drive through the gateway and follow this road which takes a sharp left bend. You will see the ruins of Moone Corn Mill (See earlier post here) ahead. The road then bends to the right and after about 200m you will spot a set of wooden gates set into an archway in the wall on your right. Directly beside this is a gap in the wall which is the entry point to the ruins. You can park safely enough alongside the wall at the wooden gates.
Posted by Castlehunter at 13:55