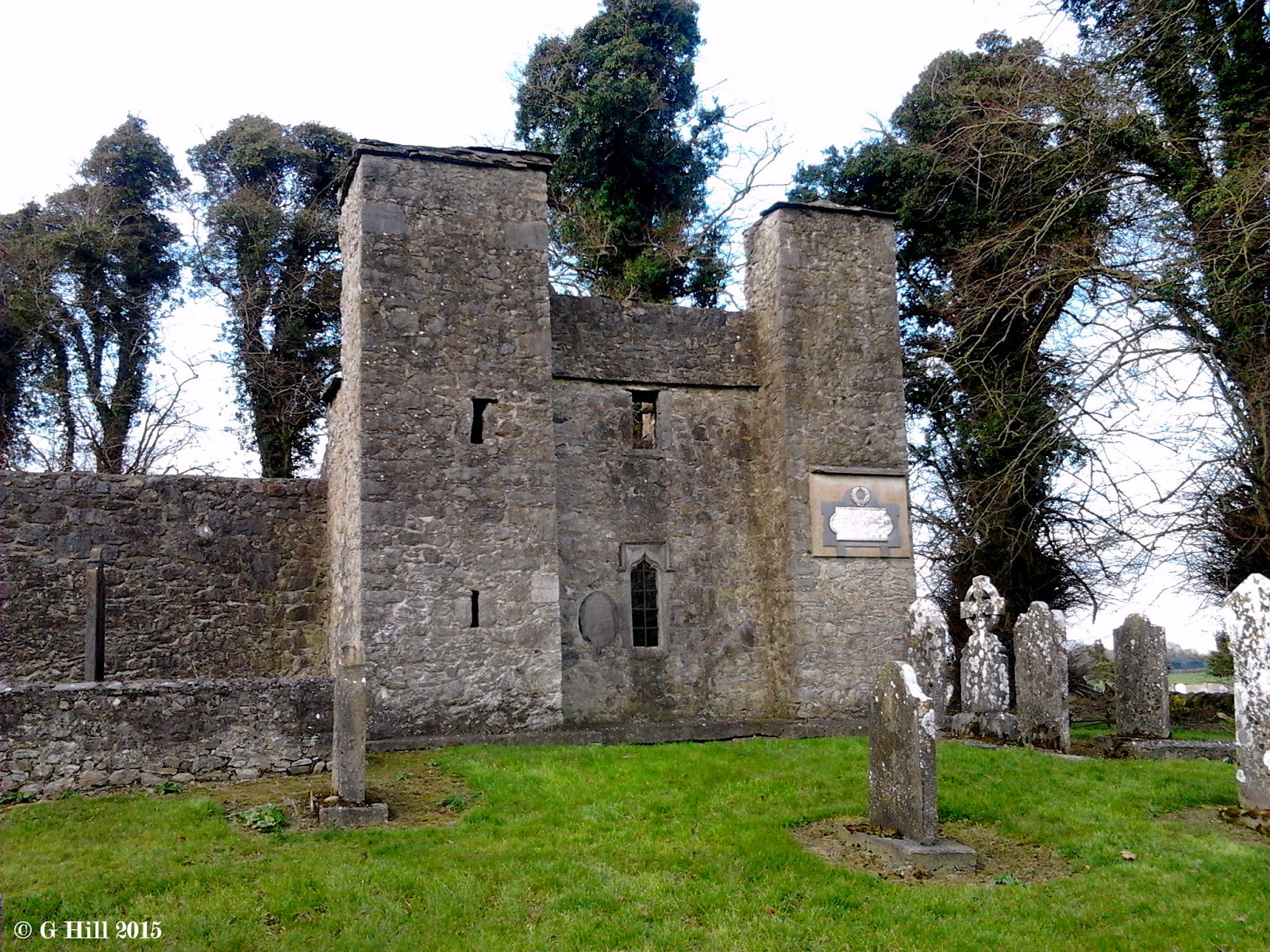 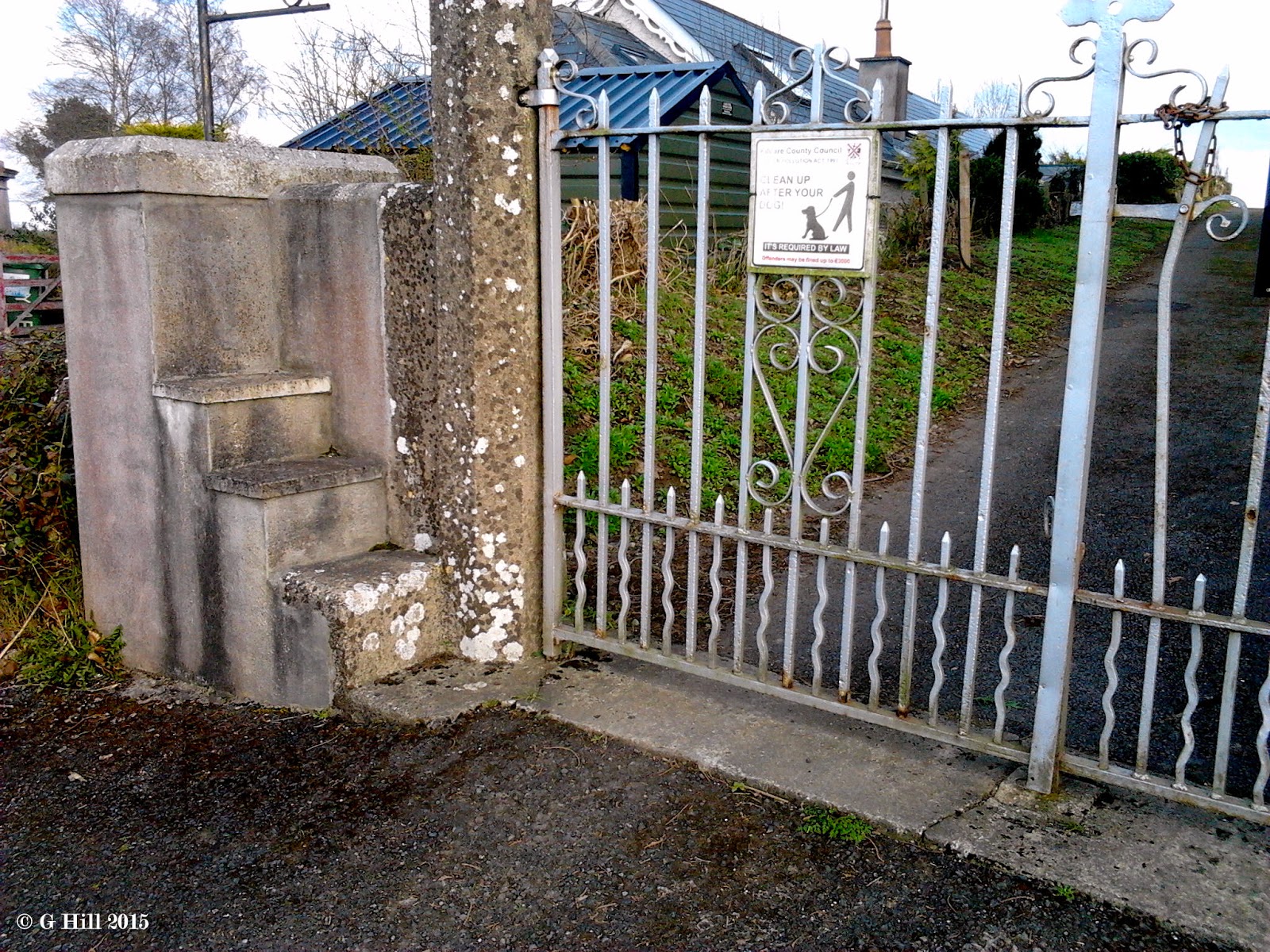 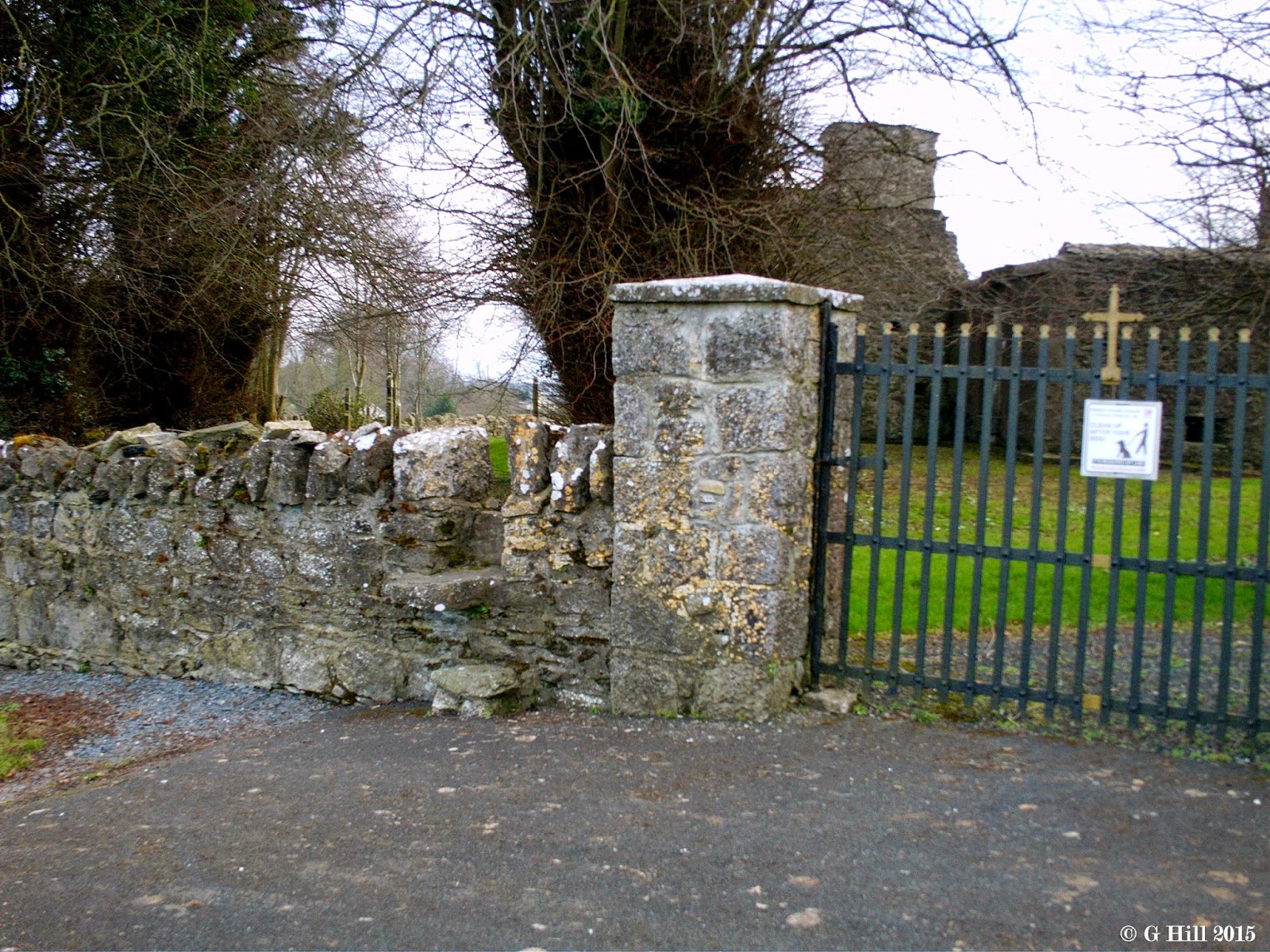 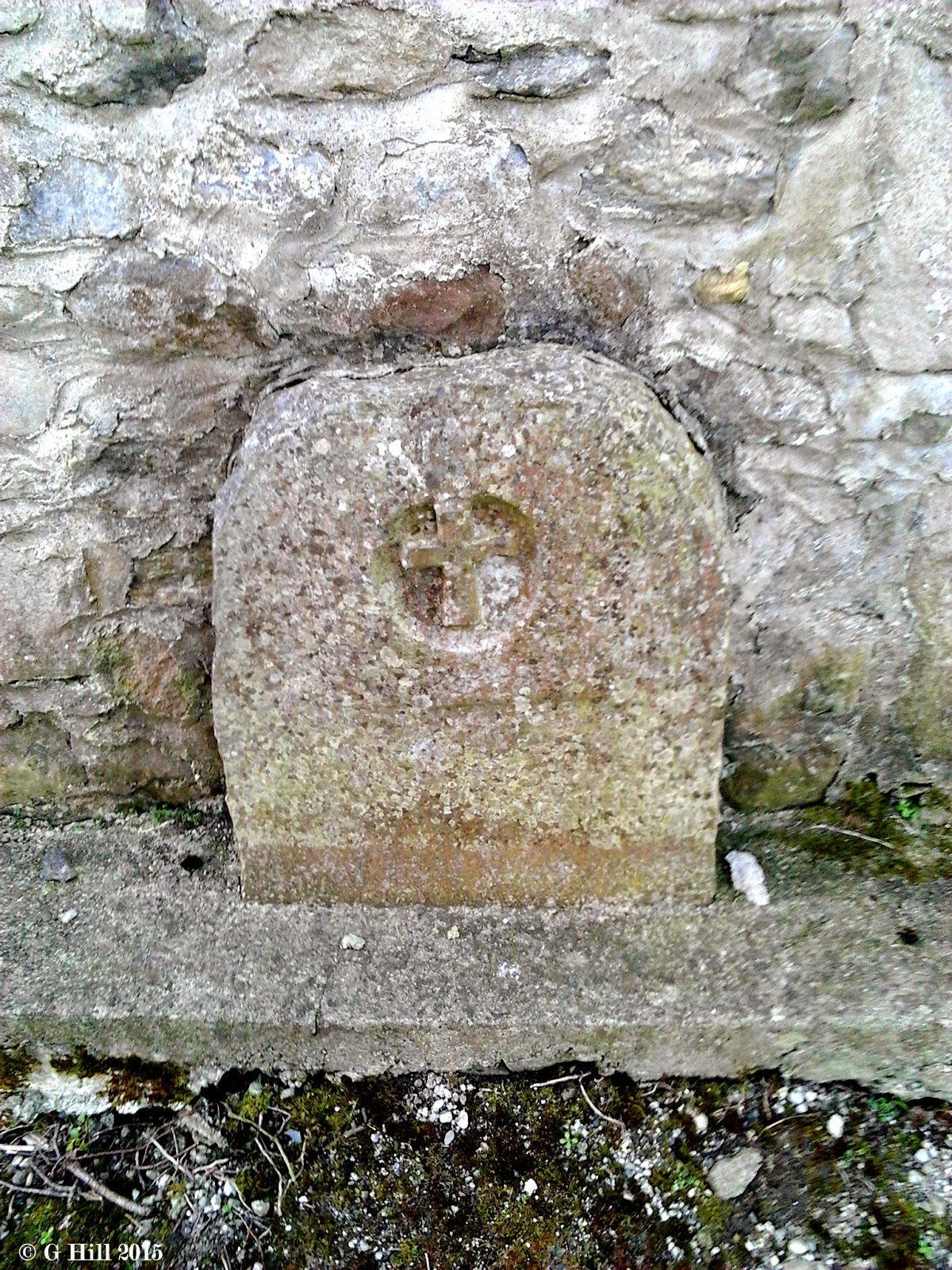 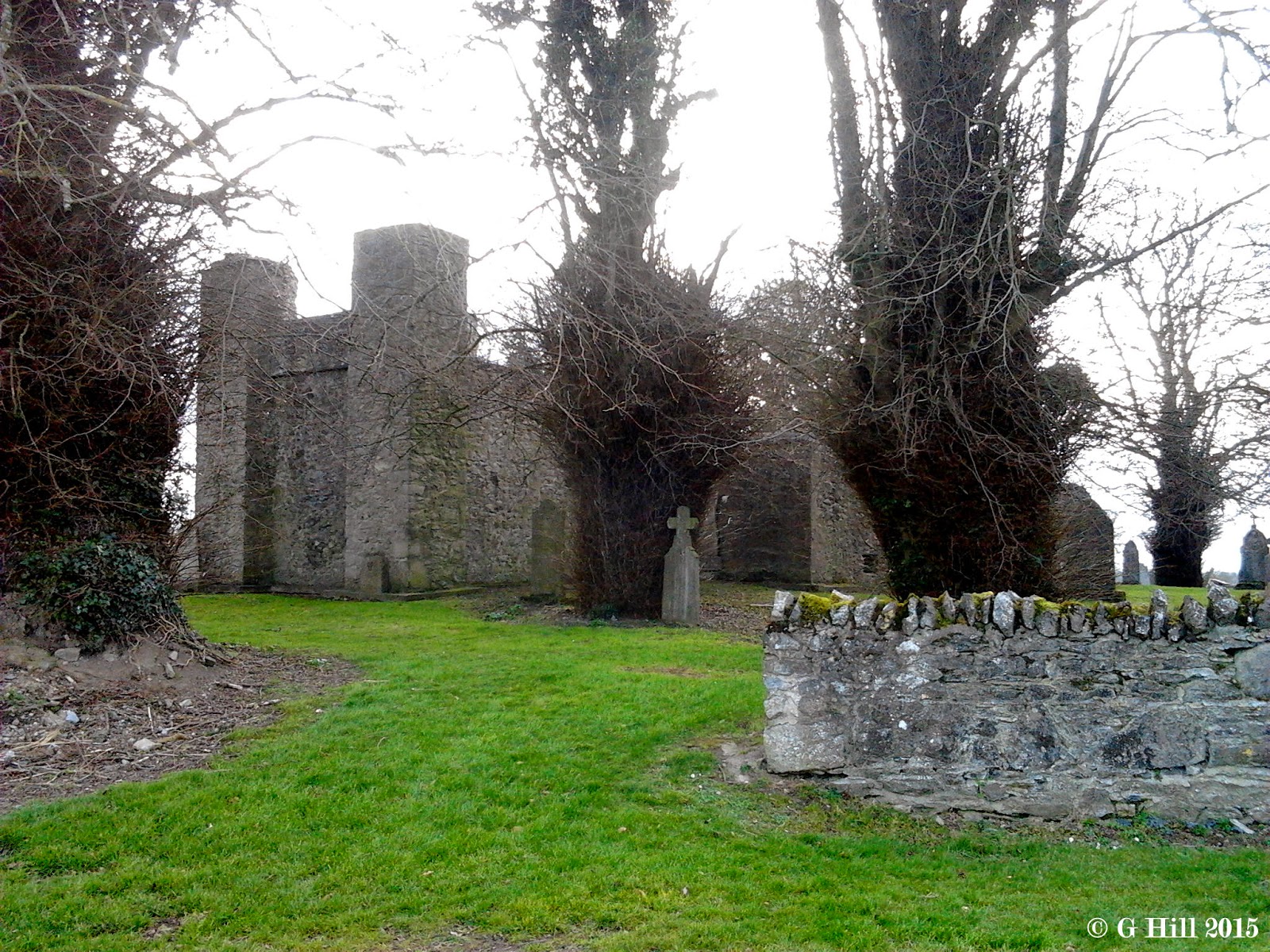 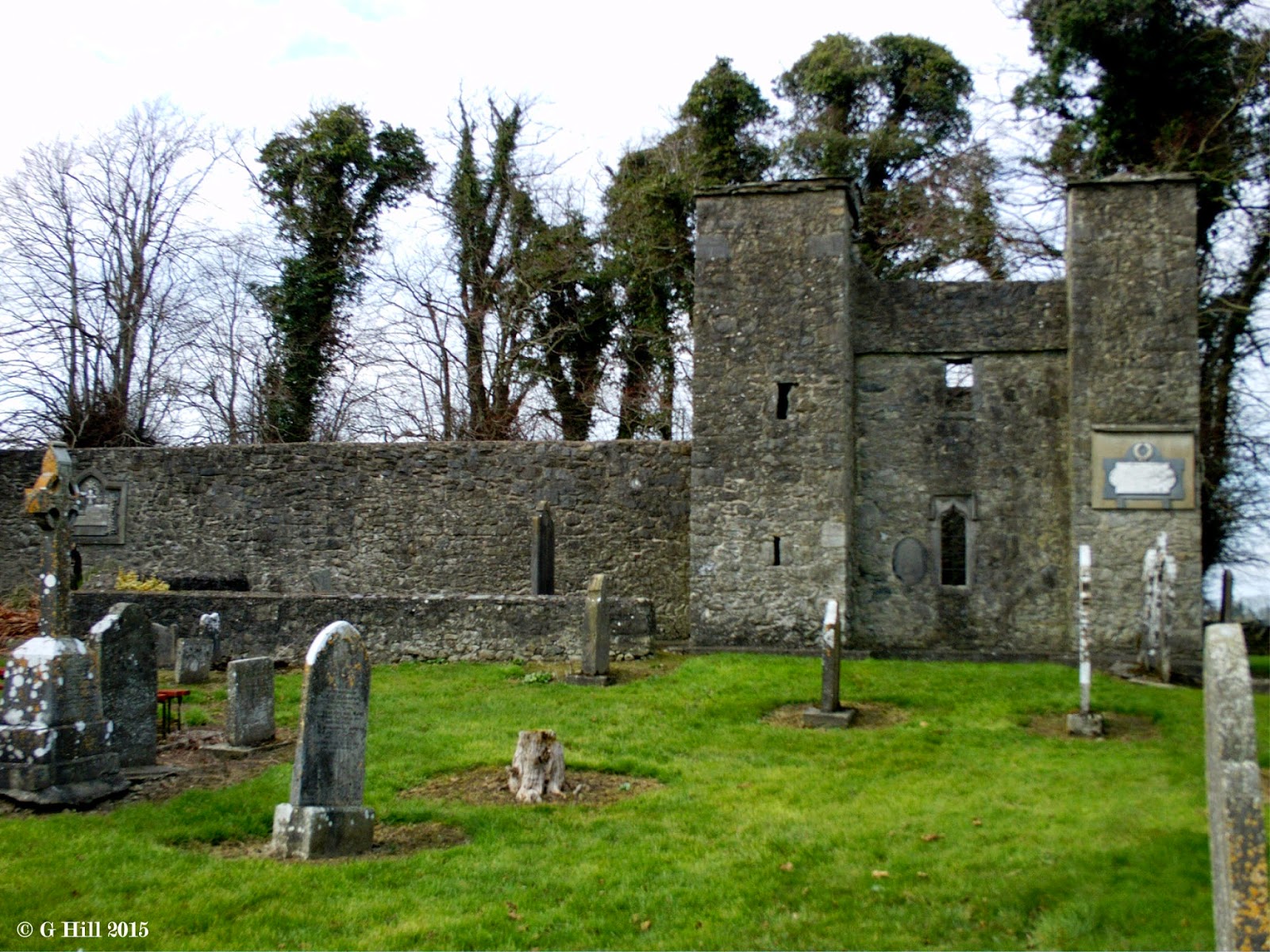 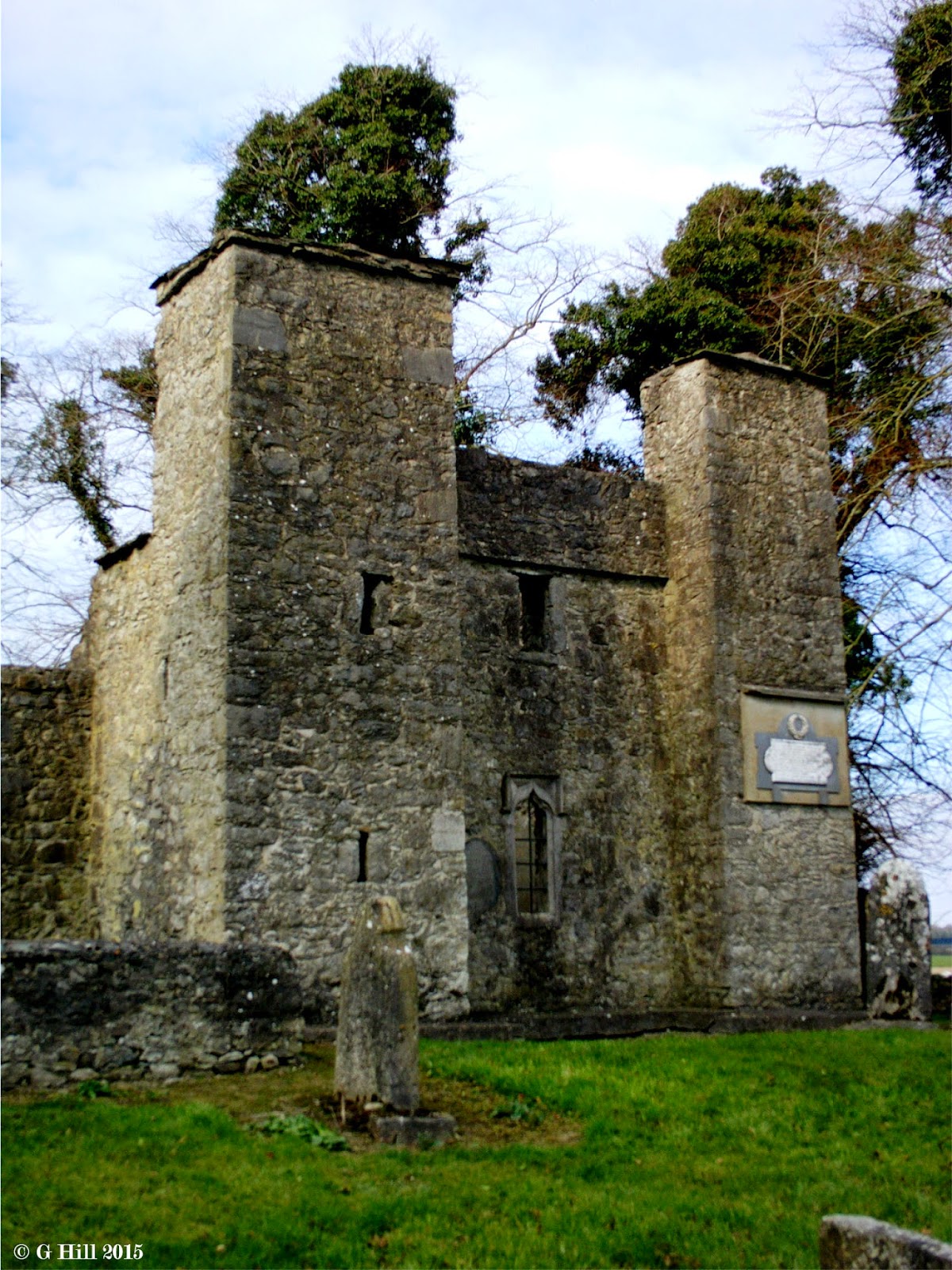 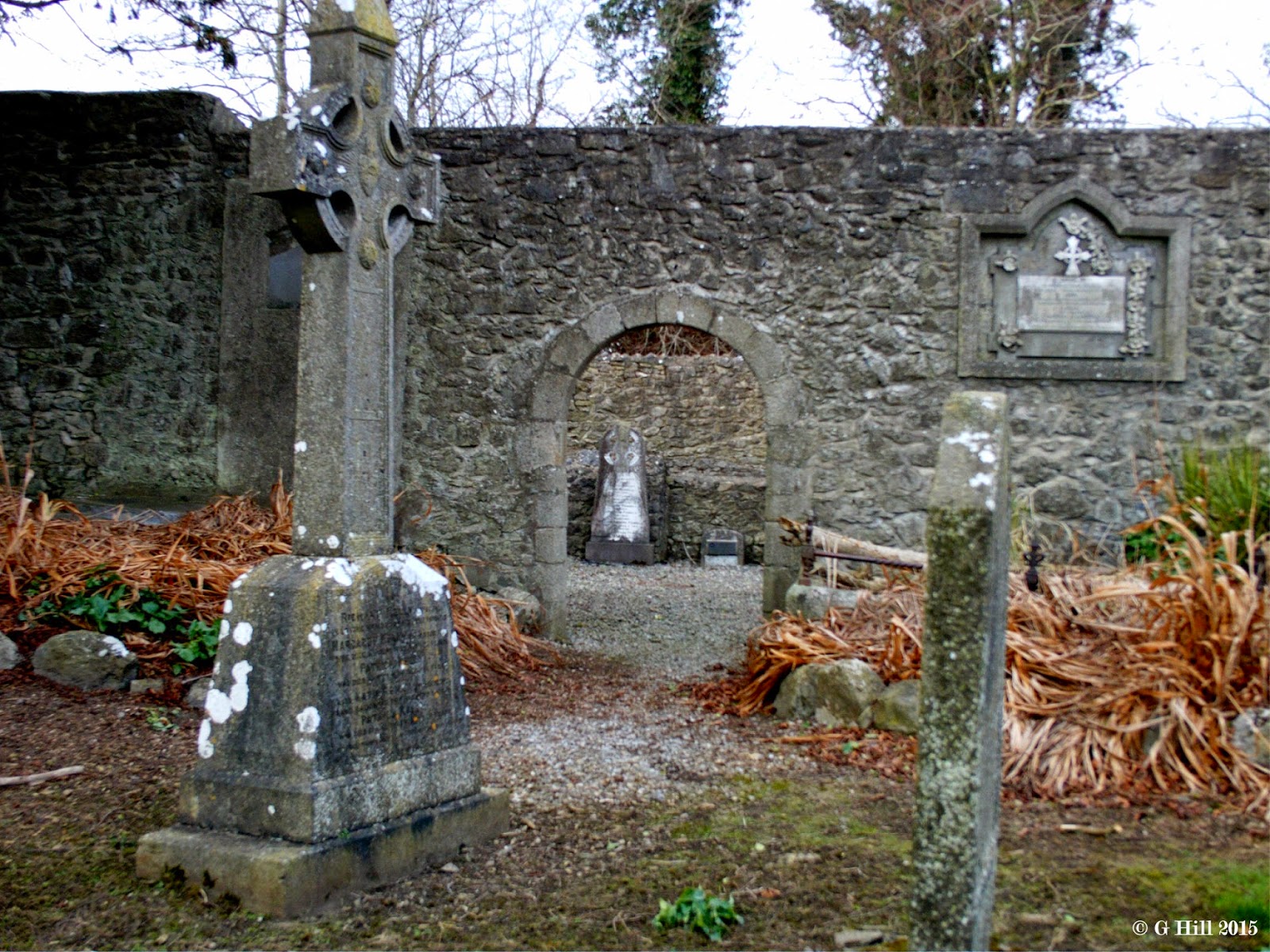 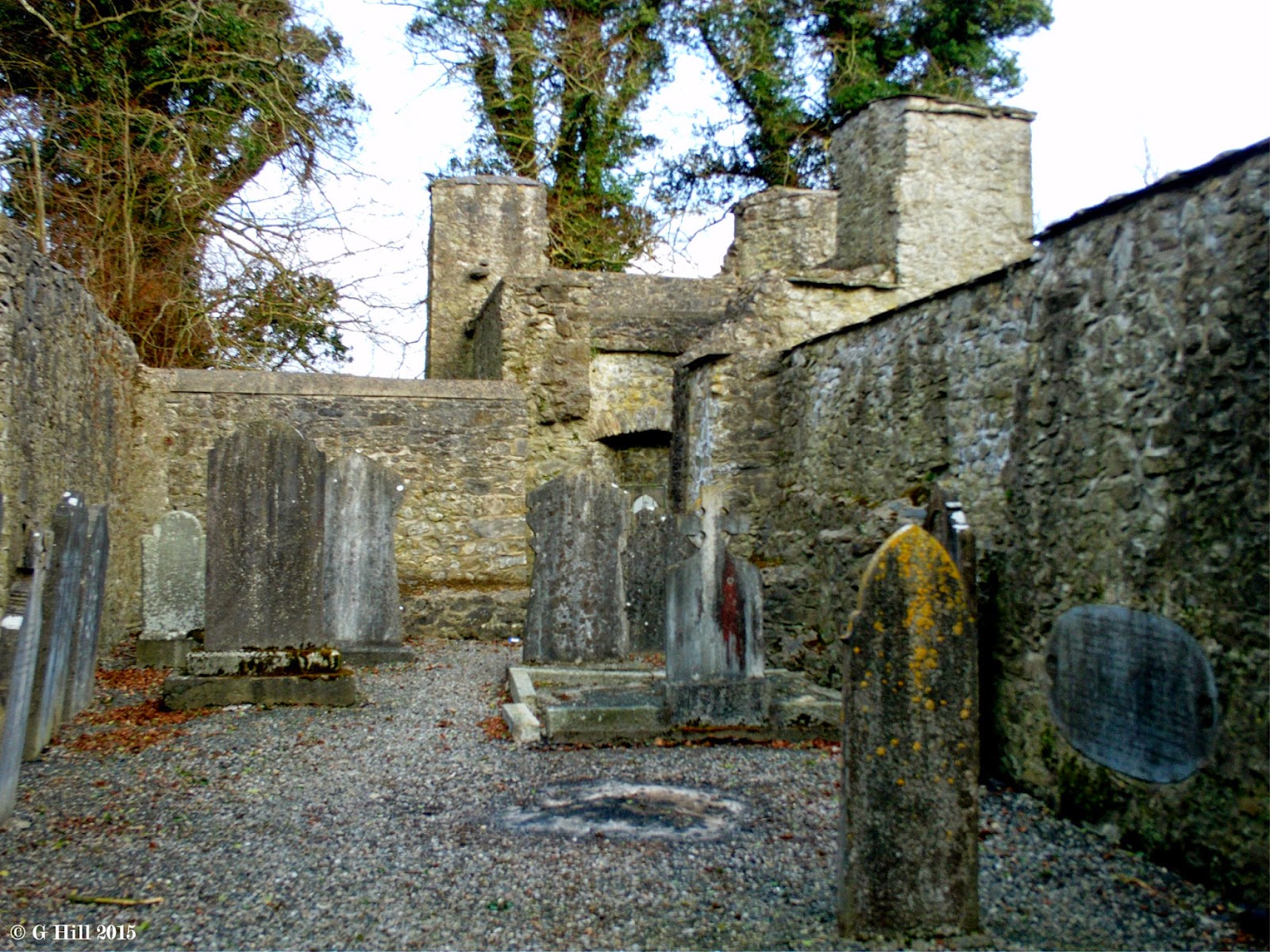 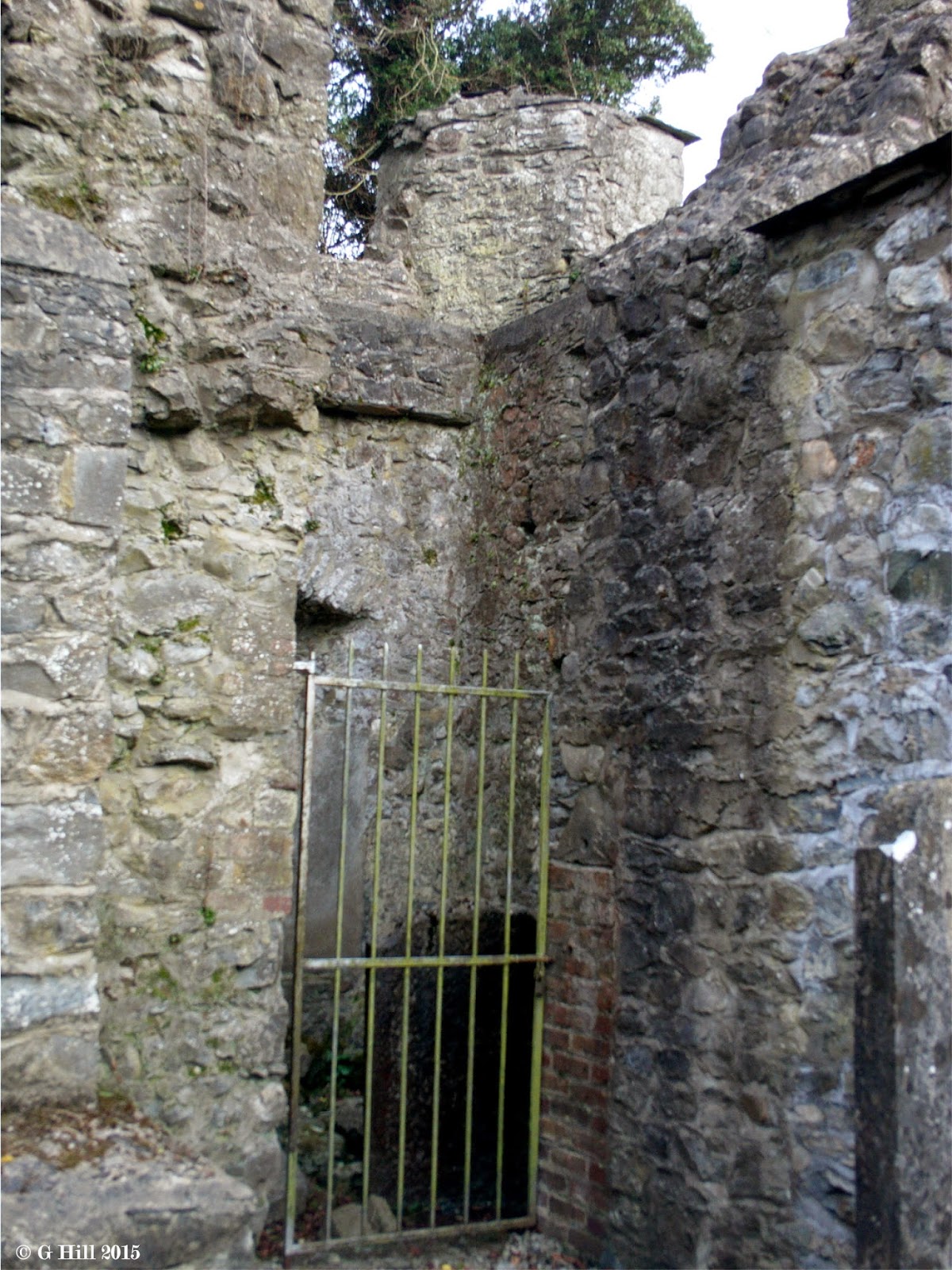 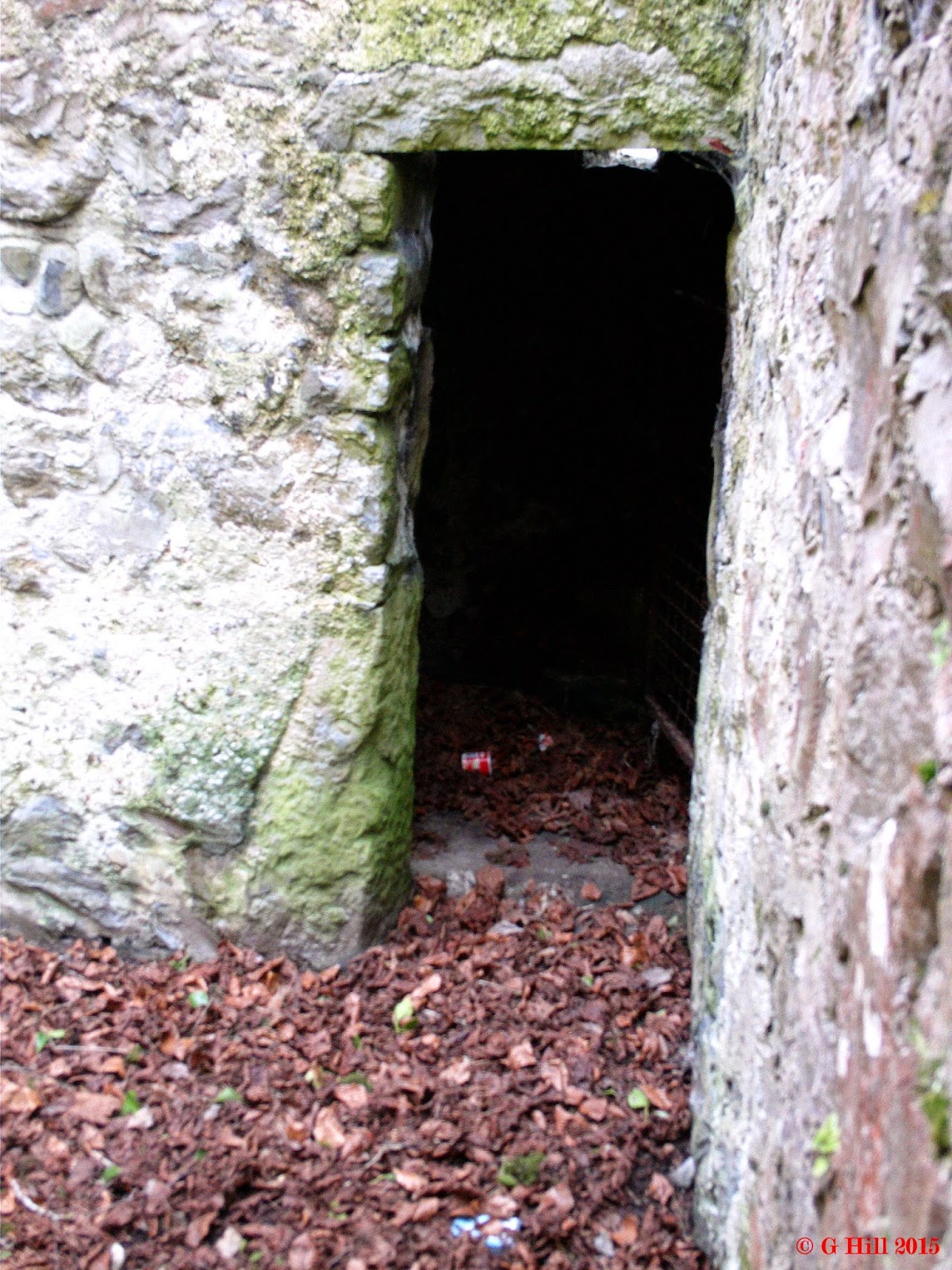 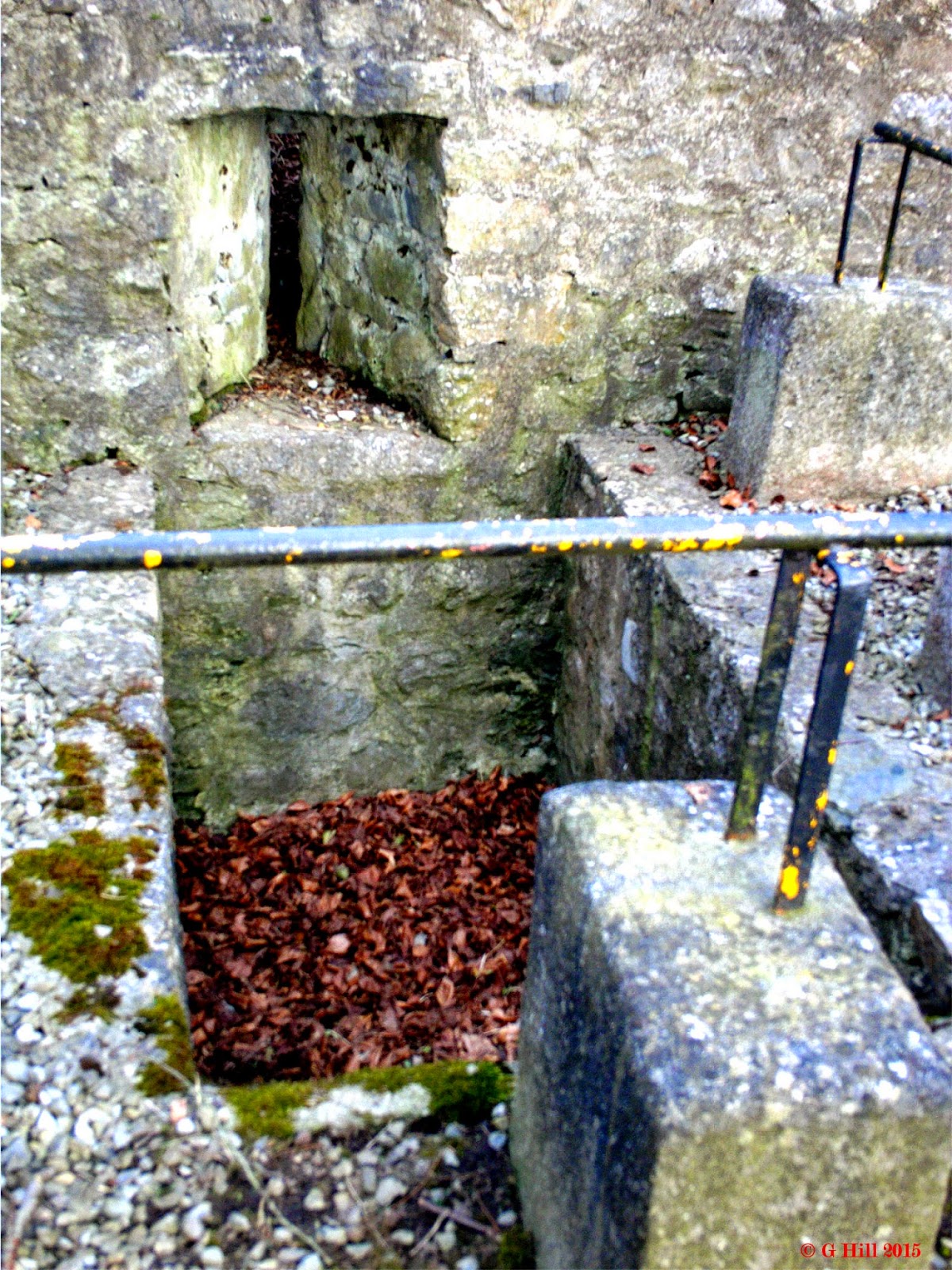 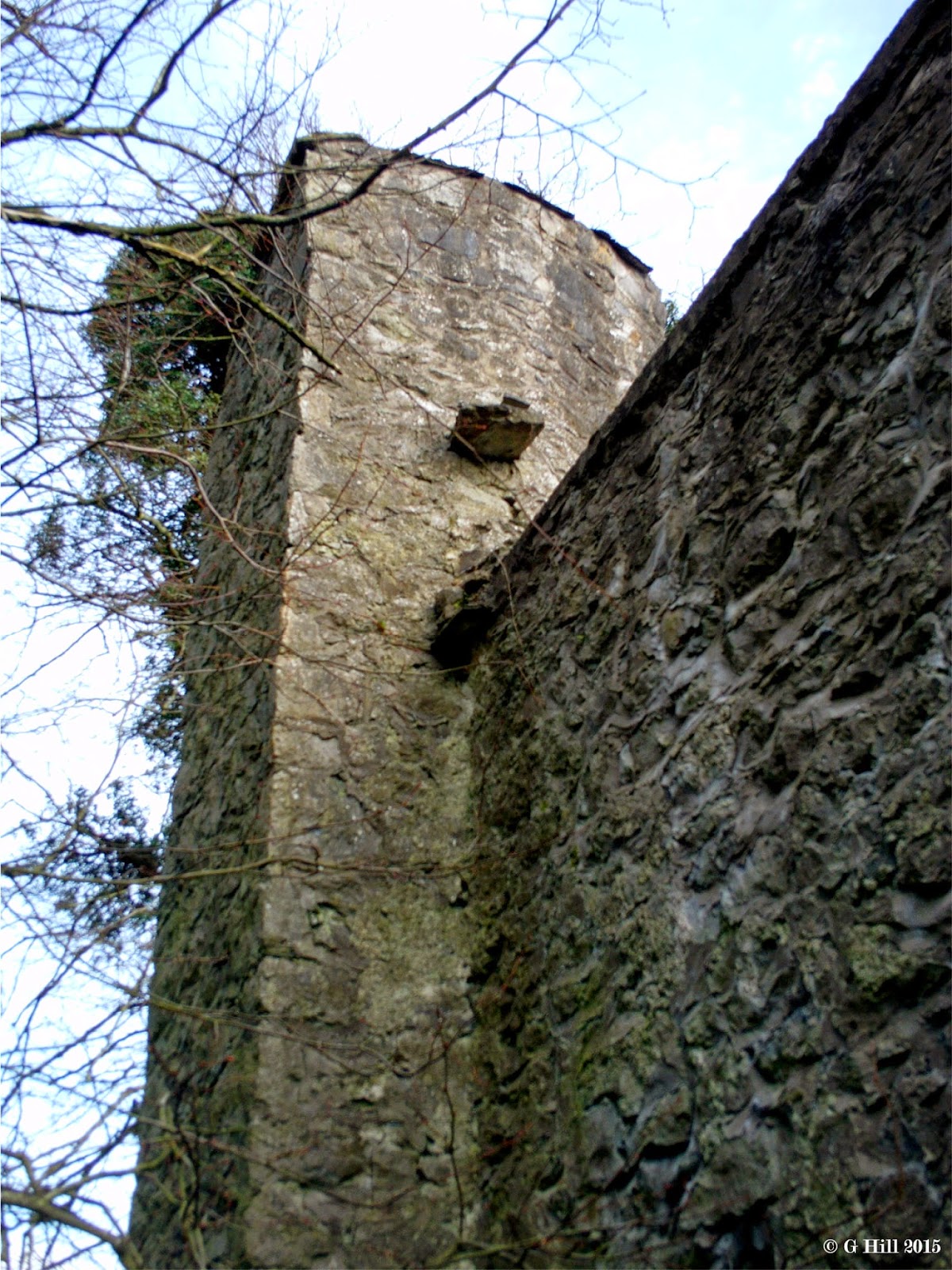 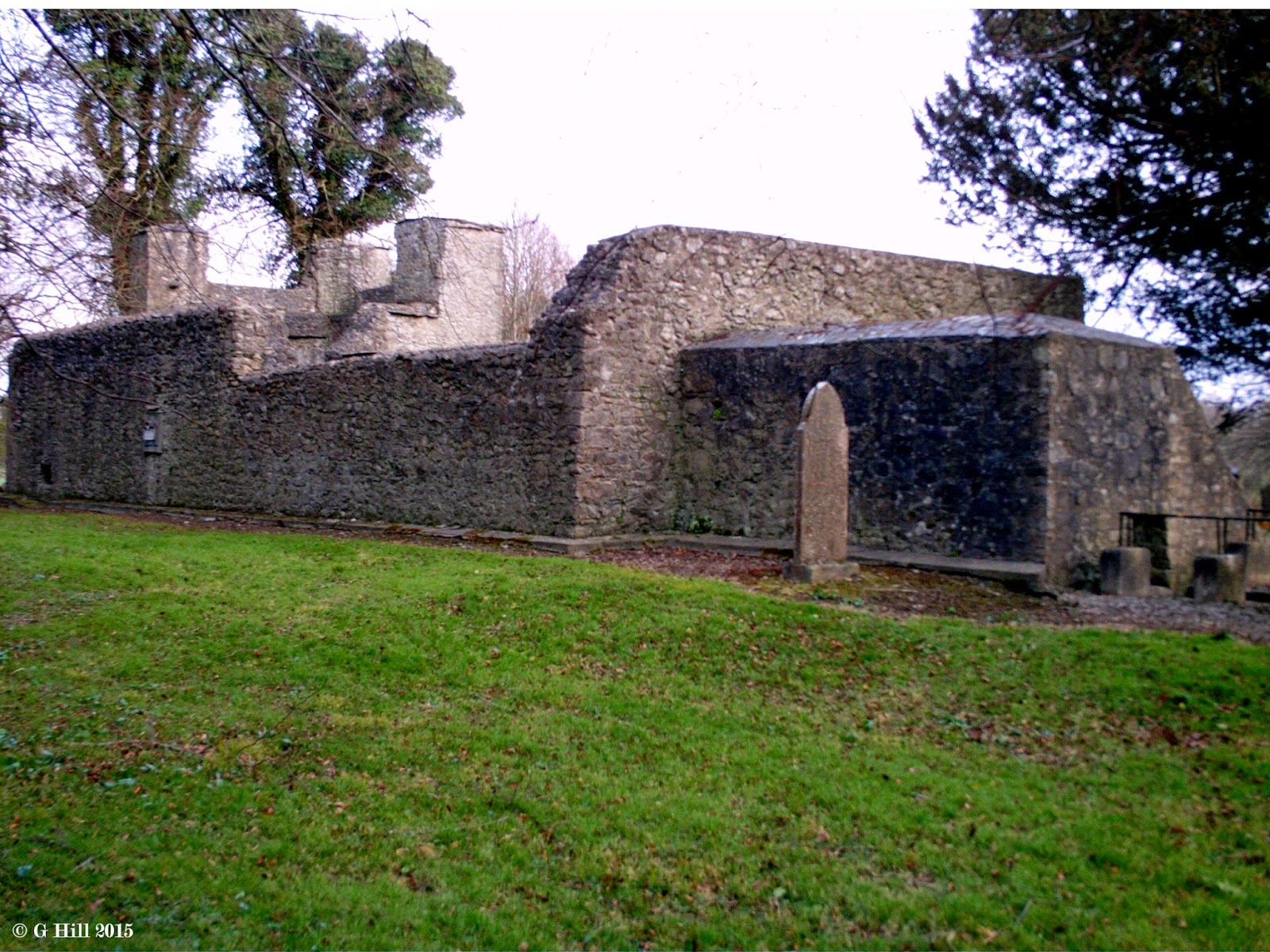 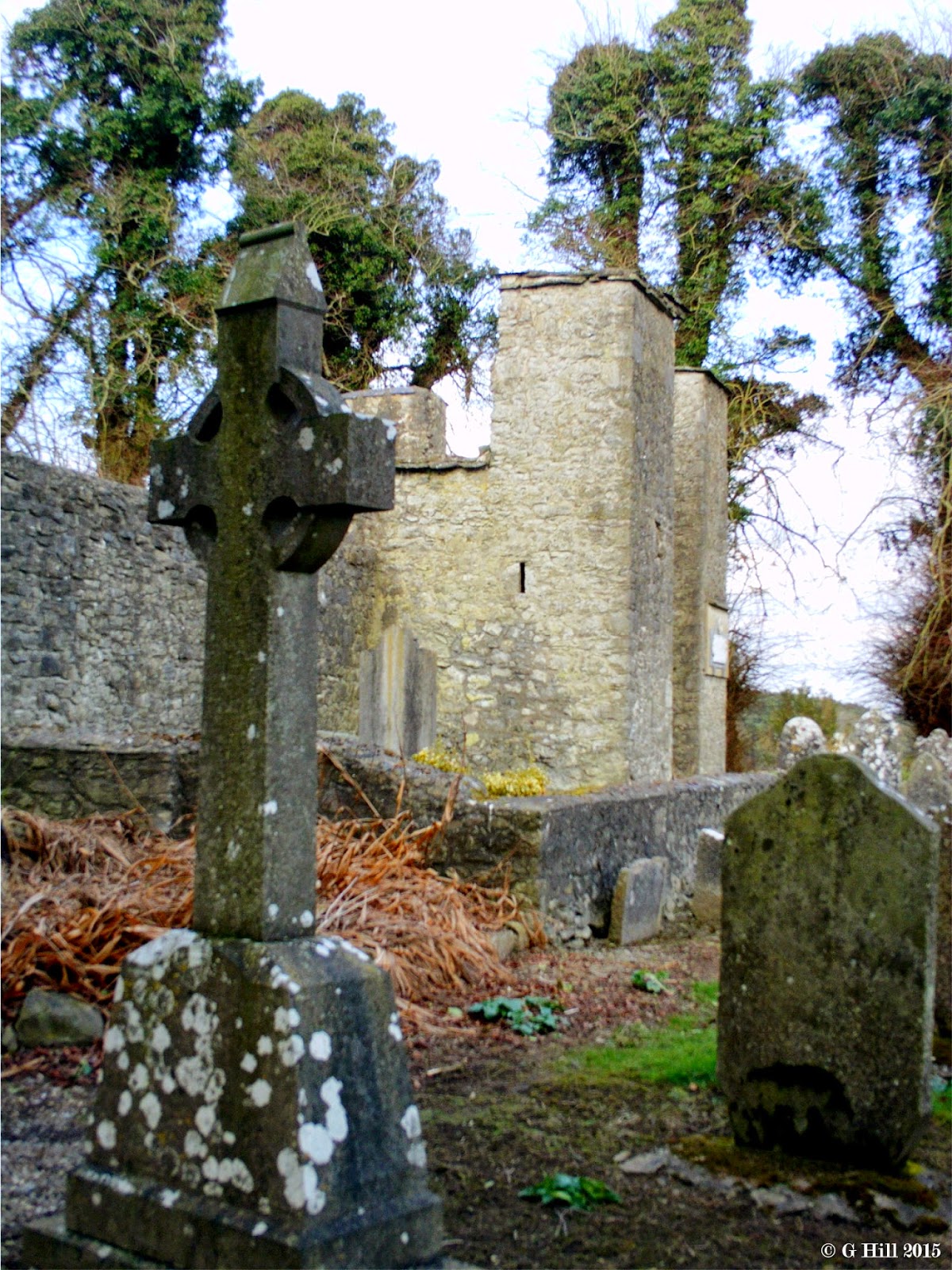 This medieval Church stands in the very ecclesiastically prolific county of Kildare. It was originally run by the Knights Hospitallers and is recorded as being in ruins by the mid 1600’s. Unlike a lot of other churches of its era this one is distinctive by its castle-like tower. The ruins and old graveyard are dwarfed now by a much larger modern cemetery adjacent. There is a roadside stile to enter the modern cemetery and another in the enclosure wall of the old graveyard although the wall is also breached in the eastern side of the enclosure.
The ruins underwent some restoration and this has had an effect of making the exterior look a bit plain and featureless. Nonetheless it is laudable that people took on this work to preserve what remains. The robust tower which is located on the South Eastern corner contains a spiral stair which is accessed by a small lintelled door within the church. Entry to this door was unfortunately inhibited by a locked gate on our visit but I’m sure a key is available. The ruins measure approx. 65ft x 18ft and can be entered by a door in the South wall. All of the walls are still more or less upstanding. This site is also distinctive as being the only mixed graveyard in the country containing some remains of those of the Greek orthodox faith.
I have to say despite the plainness of this ruin I was really quite impressed by it. On first sight and slightly obscured by trees you would almost be convinced you were about to visit a castle. The tower although not terribly tall seems to loom over you especially if viewed from the Eastern aspect. I can only imagine that a tower of this sort was constructed with the defence of the Knights Hospitallers in view. The interior of the Church like so many Church ruins was seen as consecrated ground and subsequently many graves were placed there. Slightly South of the ruins outside of the enclosure is the large Wogan-Browne mausoleum belonging to the Brownes of Clongowes Wood.
So all in all I found it an interesting visit and well  worth a look if you are in the area. I will certainly return again soon to hopefully gain access to the tower.
To find the ruins take the R407 Northwards out of Clane and drive for approx. 3KM and you will spot a white sign on the grass verge on your left which states “Caution Cemetery entrance ahead”. About 100m past this is a right hand turn that leads directly to the graveyard entrance gate and stile. You can park safely enough at the gate.
Posted by Castlehunter at 16:46 5 comments: 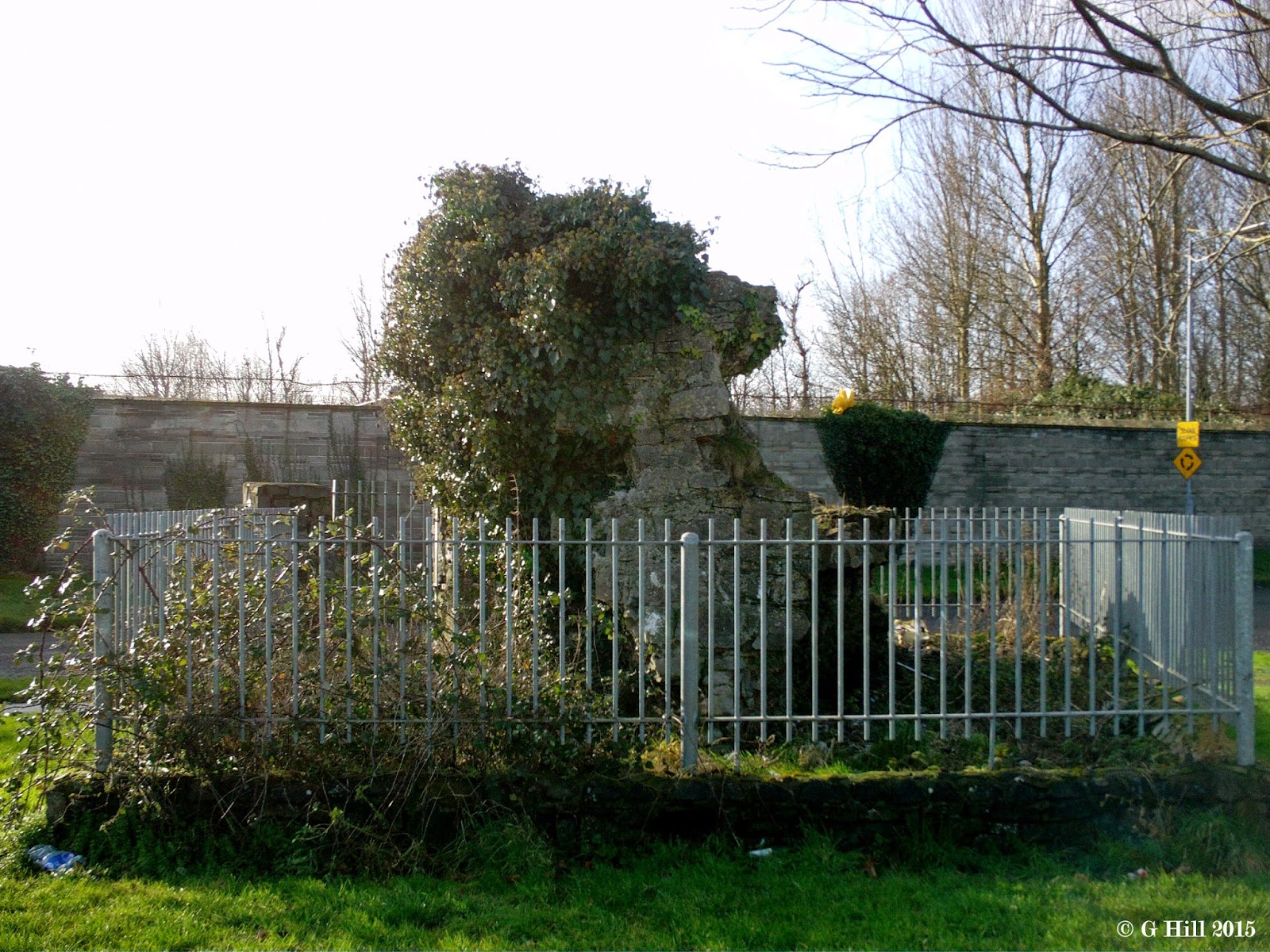 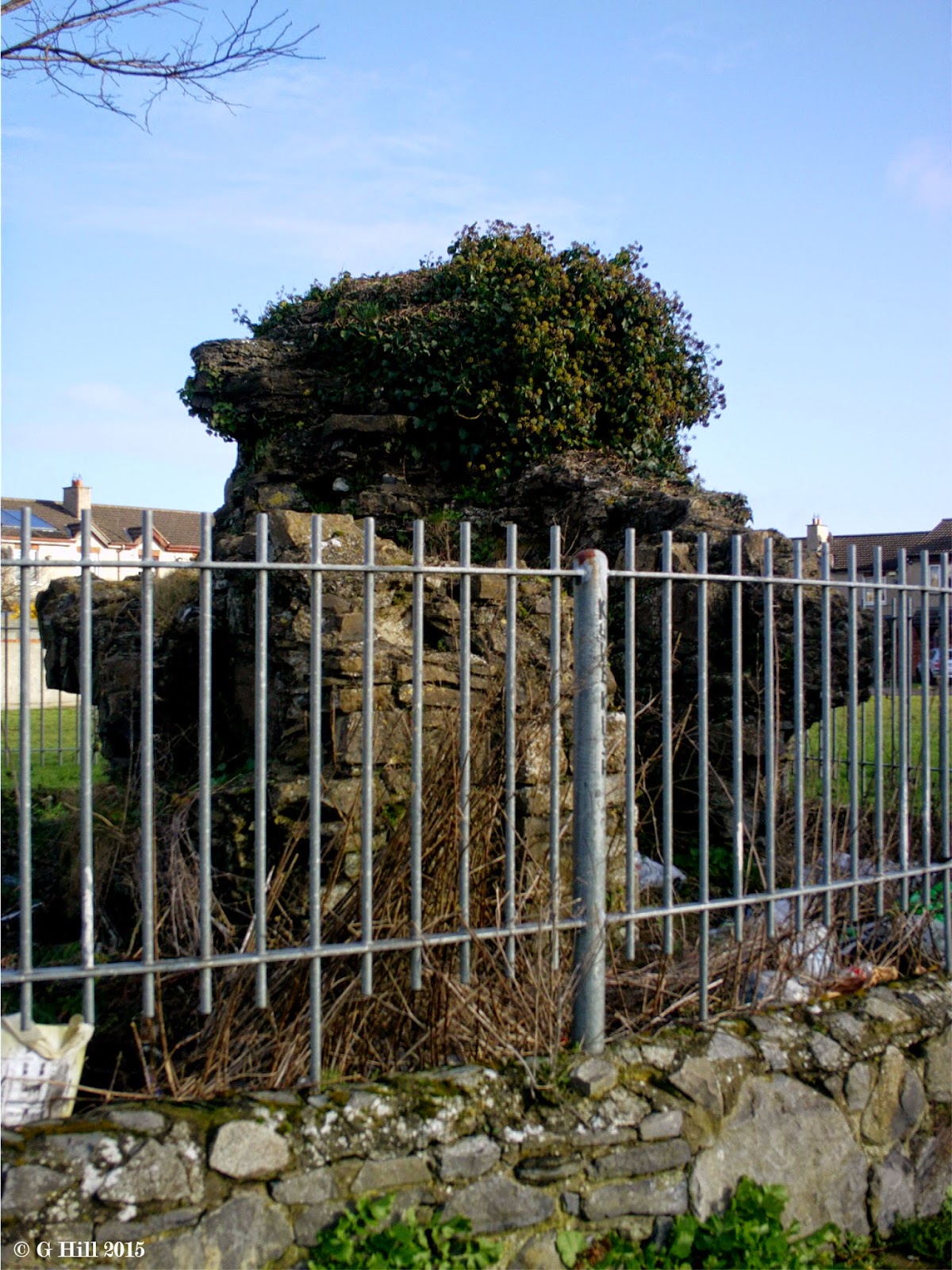 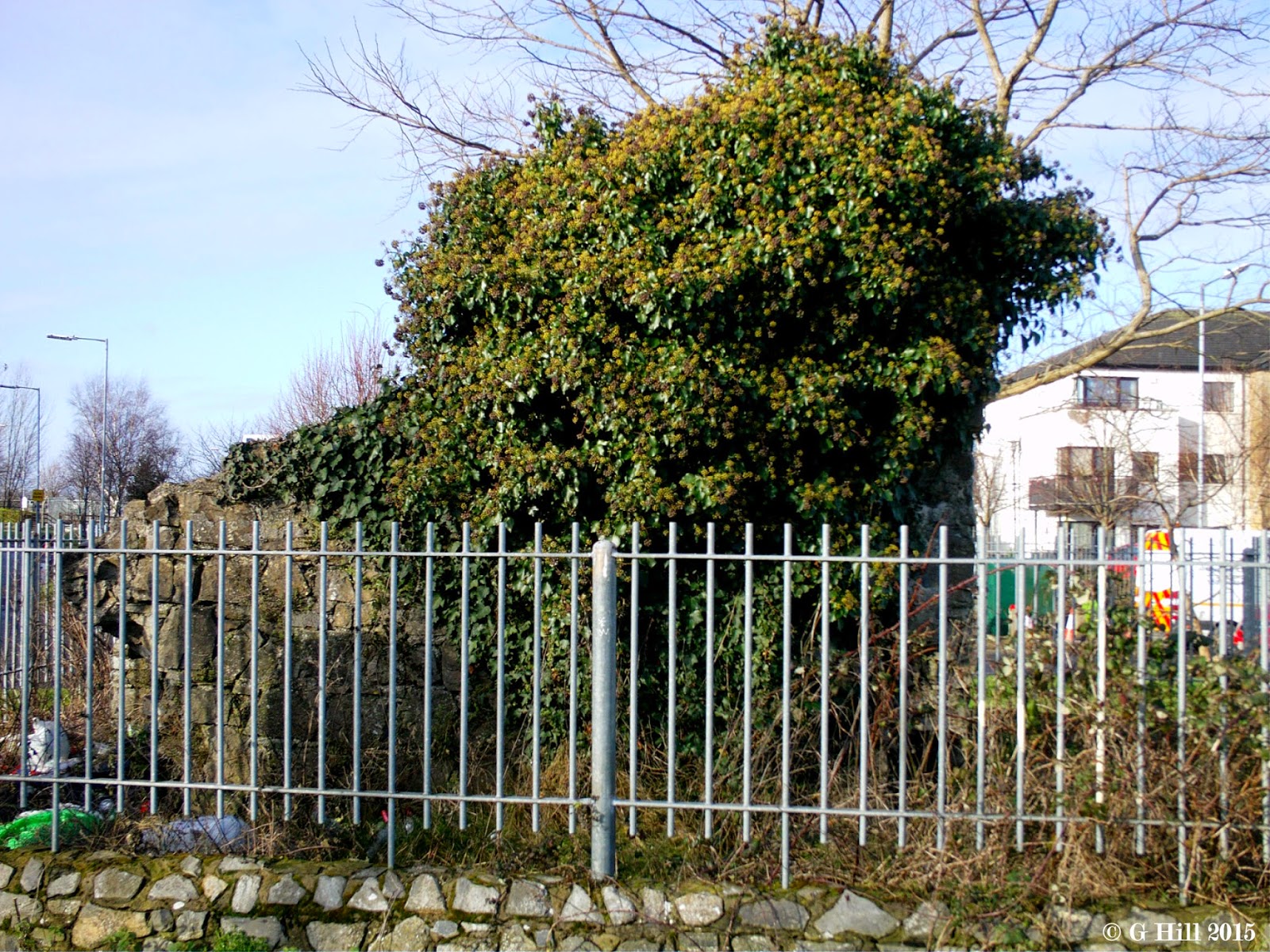 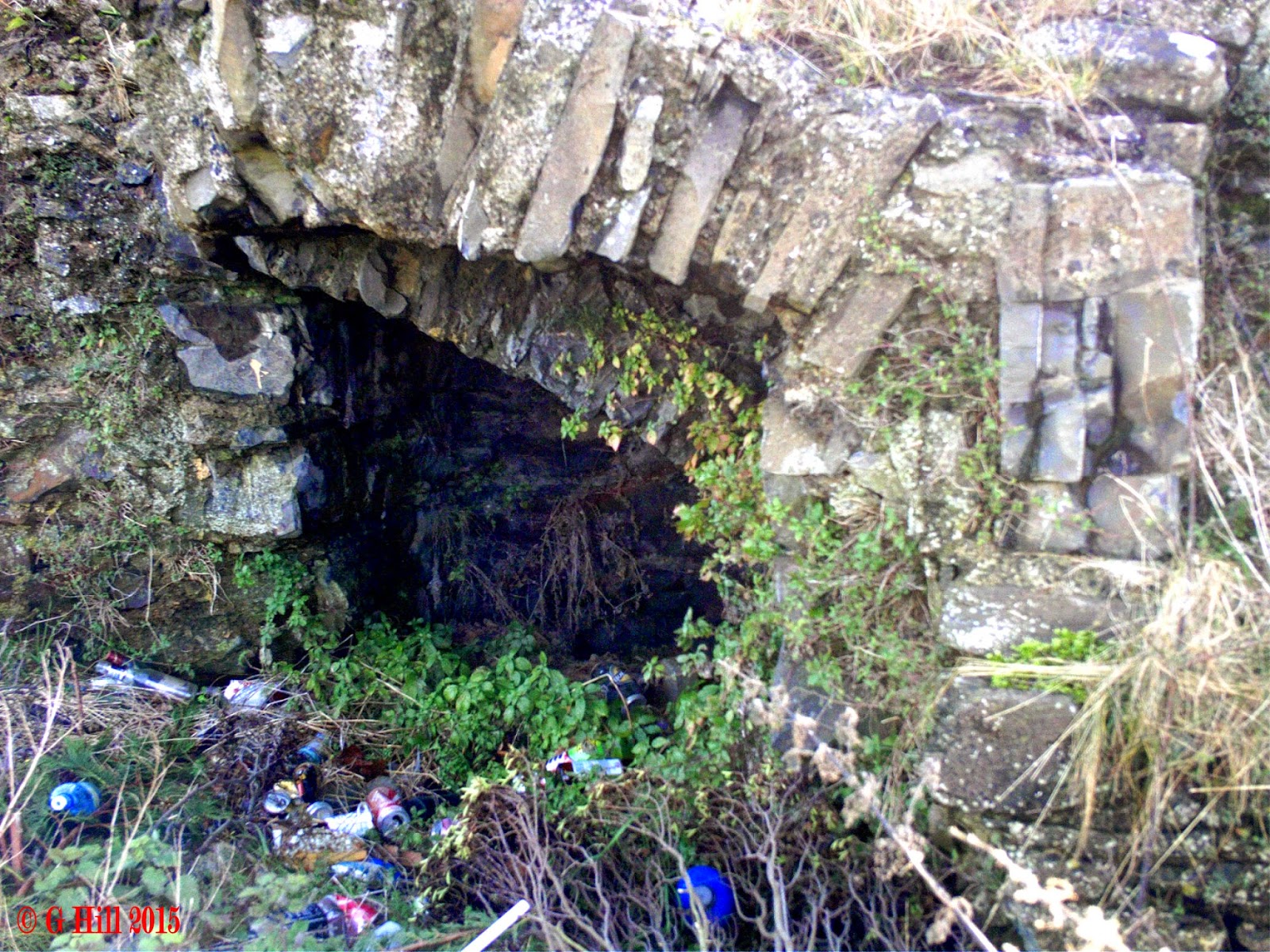 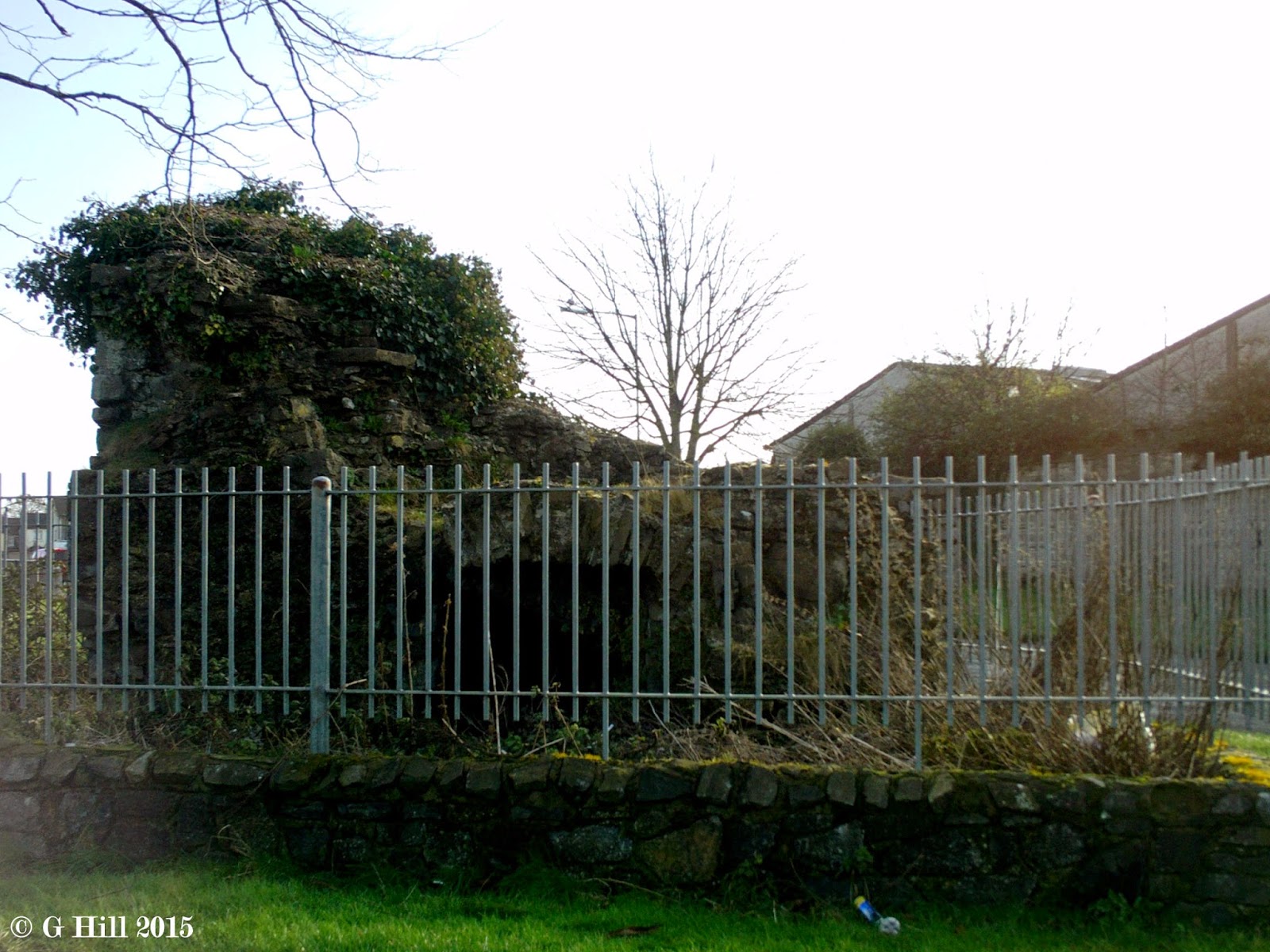 A small one to be getting on with.  In a modern housing estate in Clondalkin lie the remains of the Castle of Deansrath. There seems to be a vagueness about its origins but it is recorded to have been owned by Edward Bassenet one of the numerous Deans of St Patrick's Cathedral in the 16th century. Hence probably the origin of the castle’s name. After the dissolution by Henry VIII to which controversially Bassenet actually surrendered the deanery, he took to residing in the Castle when it and its lands were granted to him. In 1641 during the then rebellion the rebels took Clondalkin and were laid siege to by the English forces who burnt the village and destroyed Deansrath Castle.
Although a view of the Castle ruins by artist Gabriel Beranger from 1773 shows substantial ruins only a fragment of the Castle remains now and rather than being demolished when the housing estate was built it has instead been protected by a metal fence and sits on the edge of a green area. Being in an estate I always feel a bit uncomfortable photographing as I’m sure it might make someone think you were up to some suspicious behaviour but in fact I had no trouble at all. There really is only a small portion left to see and the top is now covered in ivy. The Western facing portion appears to have a part of a vault or perhaps maybe a fireplace, otherwise it is hard to ascertain what actual part of the Castle this is that remains. Nonetheless the ruins have an interesting history and it great to see them being preserved.
To find the ruins take the N7 to Newlands Cross and then take the R113 (Fonthill Rd) towards Clondalkin.  After approx. 1.2KM you will reach a small road painted roundabout. Continue on through to the next large roundabout and turn left on the first exit onto the R134 (New Nangor Rd). Drive for approx. 1Km until you reach a junction with St Cuthbert's Rd. Turn right and drive until you reach a small roundabout . Turn right and drive about 60m and you will spot the ruin on your left. You can park anywhere around here.
Posted by Castlehunter at 12:28 No comments: