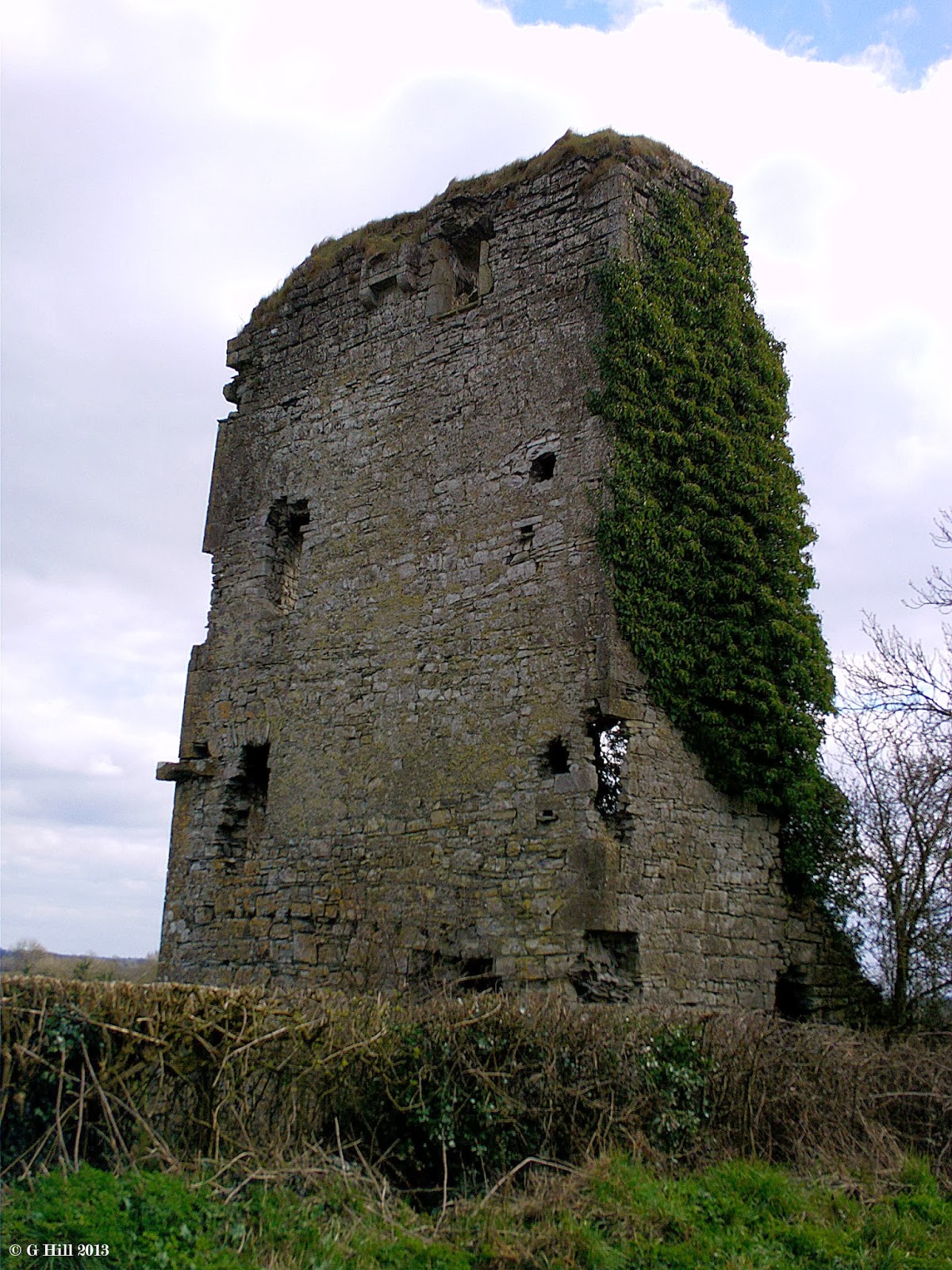 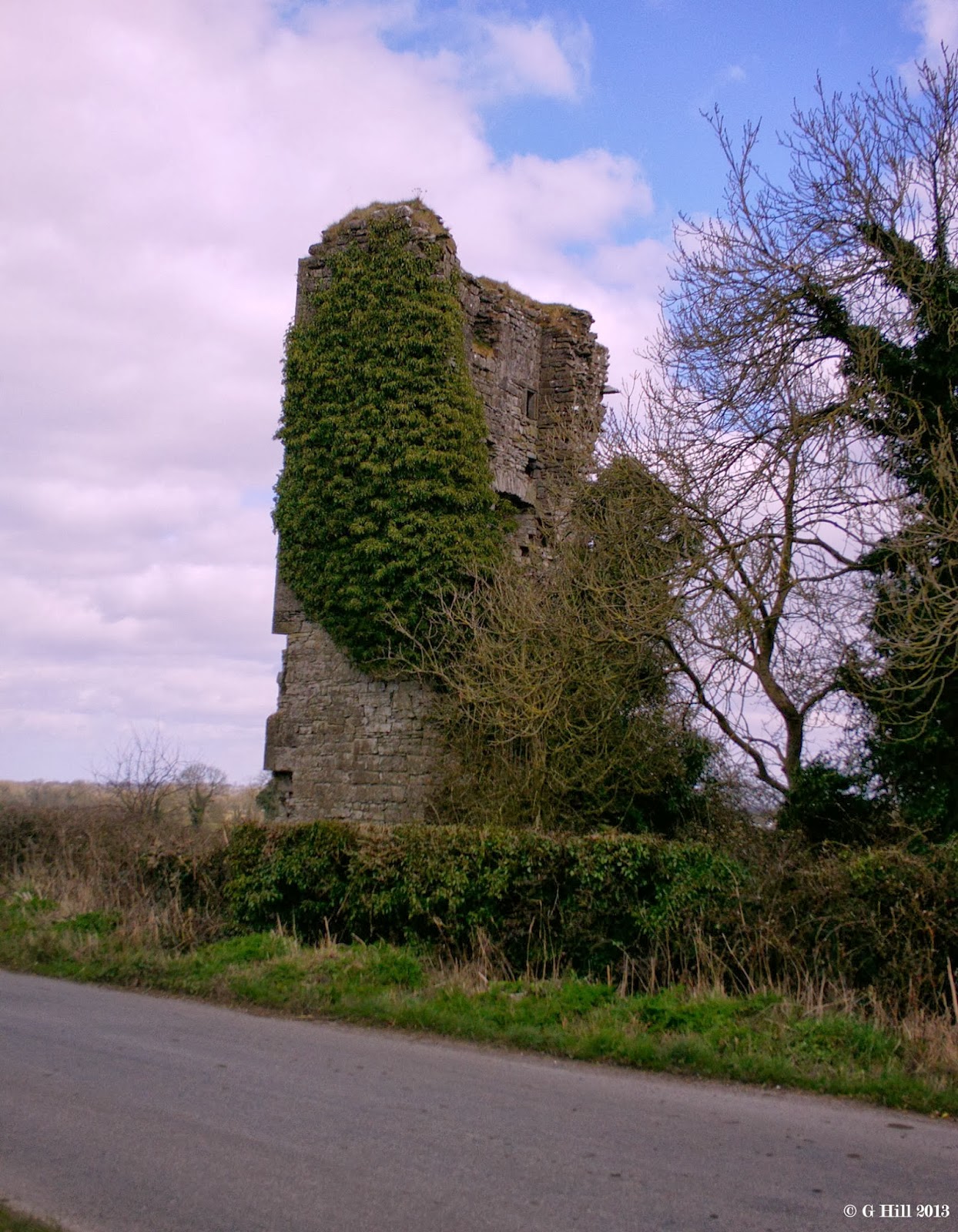 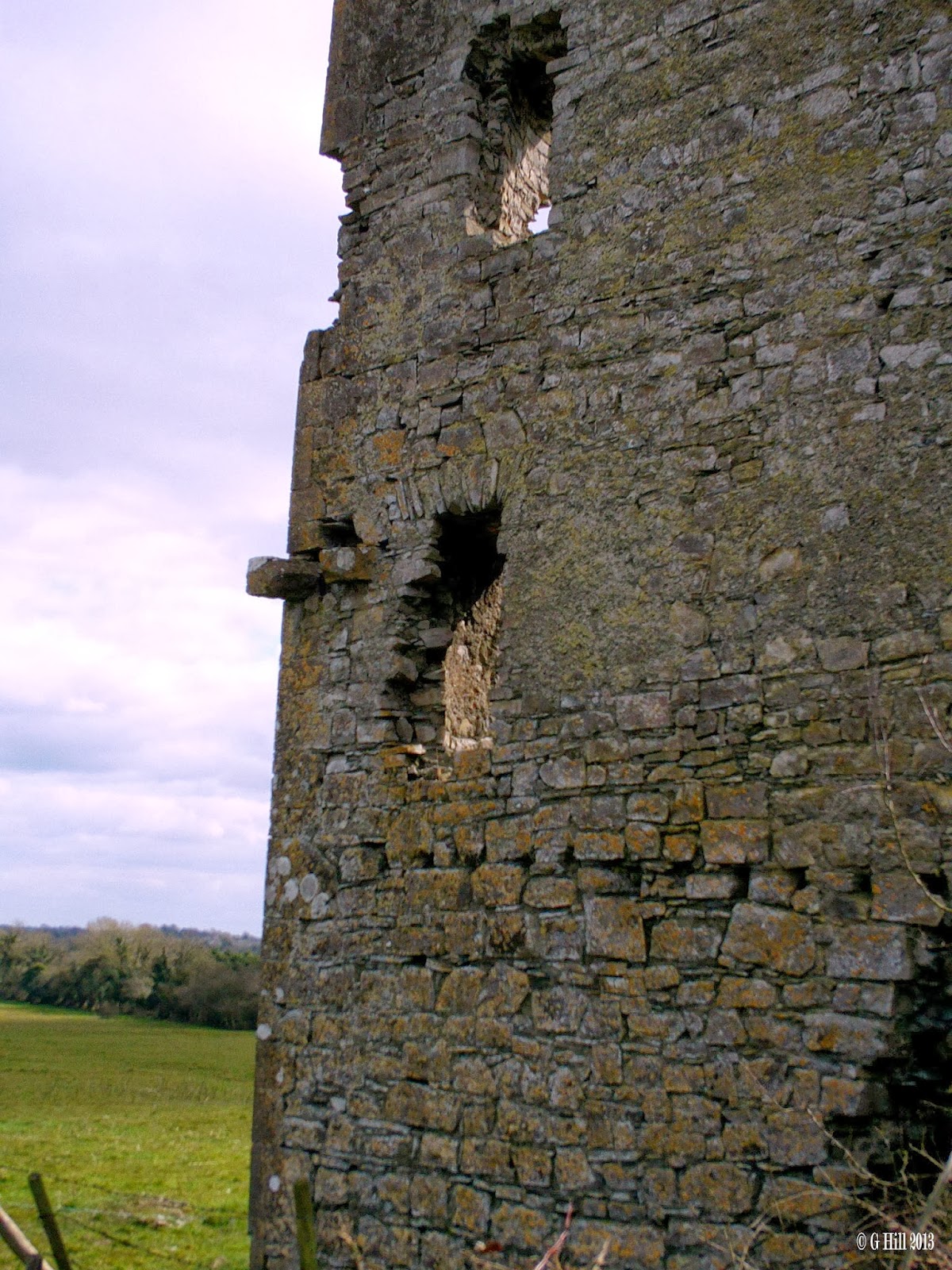 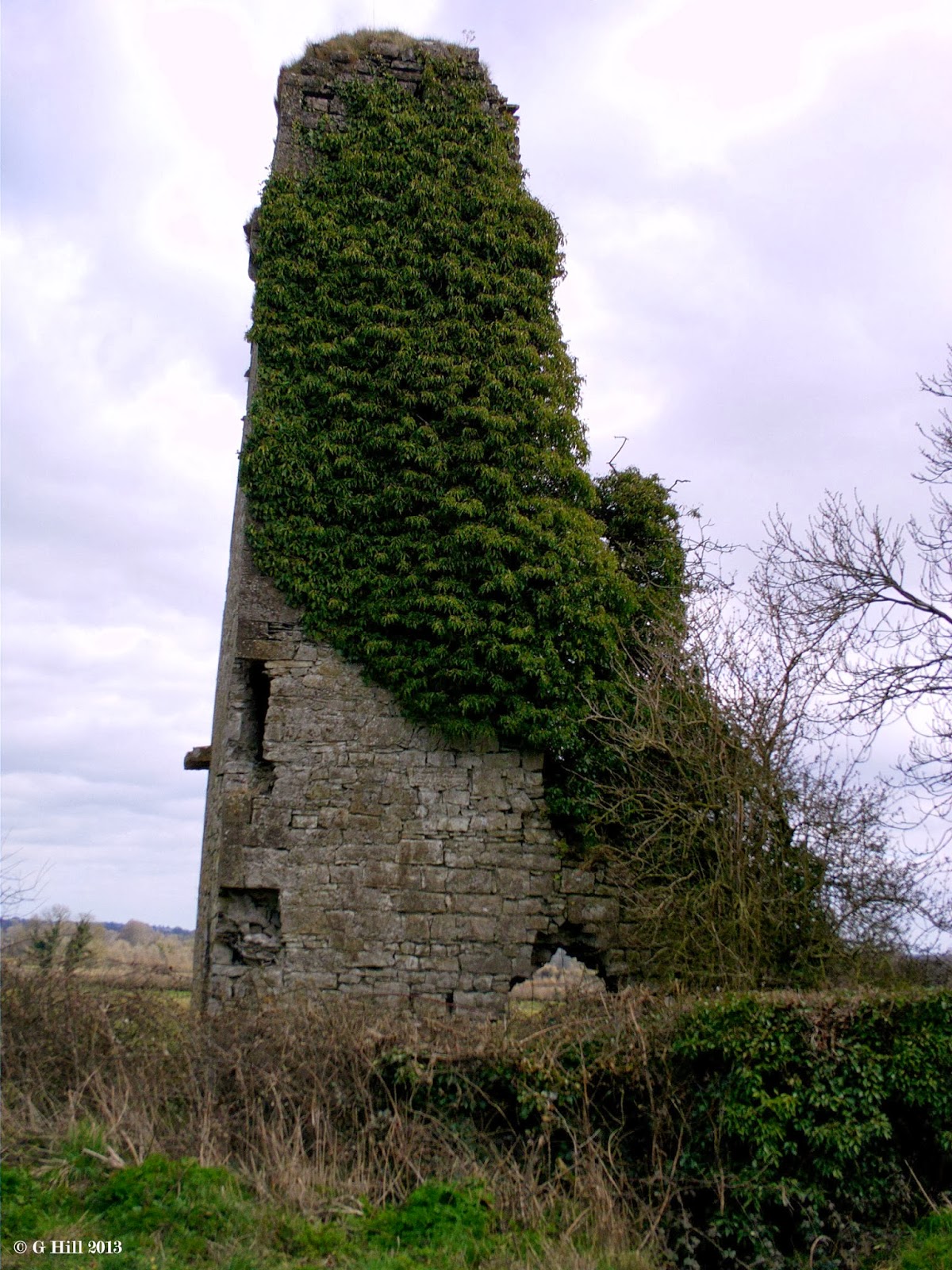 Above Image: Remains of the West wall 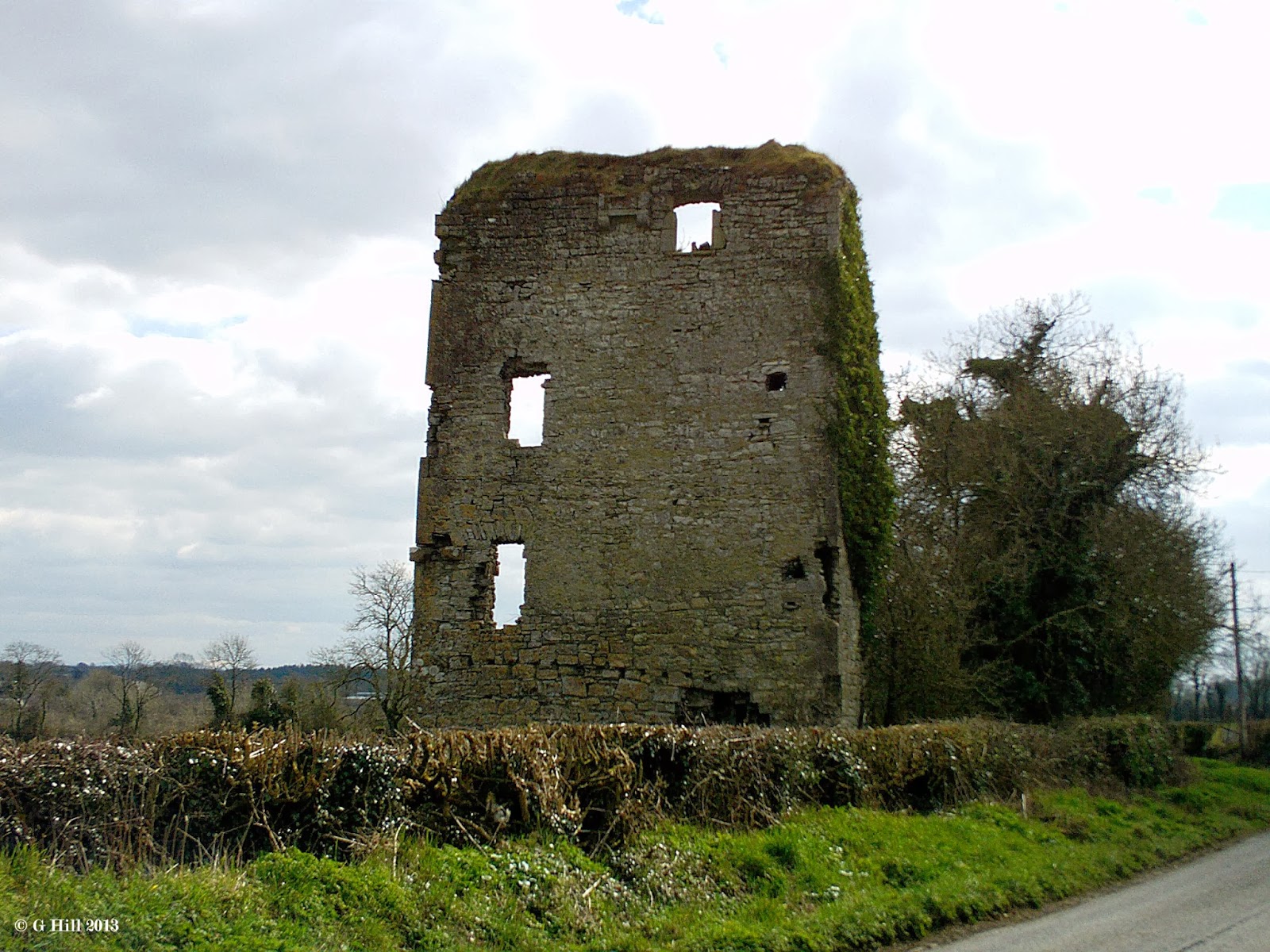 Fraine Castle is situated on what was once the perimeter of The Pale. Built primarily for defense it may have been one of the £10 Castles from the 1400's commissioned by the Crown that dot the length of  The Pale's borders. It is likely that a garrison would have been stationed here to ward off any would be assailants. As with the fate of many Irish Castles it probably came under attack during the Cromwellian invasion and what little remains today is a testament to the cannon power involved. George Tyner's "Traveller's guide through Ireland" published in 1794 mentions the Castle as being in ruins.
We came across the Castle en-route from Athboy in search of Tremblestown Castle near Kildalkey (See earlier post here) Not expecting to see anything on this particular stretch of road it was a surprise to see the tall ruin directly in front of us. It is situated on the edge of a field at a rural crossroads. The North facing wall and partial West wall are all that remain but the North wall stands to full height allowing us to see that it was a four storey tower. A ditch and hedgerows divide the ruins from the road. I'm sure there's access to the field but I don't think that you would get any more advantage than the view from the roadside which in itself is quite dramatic.
There seems to be very little information on Fraine so if anybody can shed some more light I would be grateful. In any case it's good to document it's name and location.
To find the ruins, take the N51 from Athboy towards Delvin. Just as you are leaving Athboy there are two left turns in close proximity. Take the second turn with the sign pointing to FR. MURPHY F.C. This is Castle Avenue. Drive for approx. 2KM and you will see the ruins on your left. You can park on the road at the crossroads.
Posted by Castlehunter at 19:08