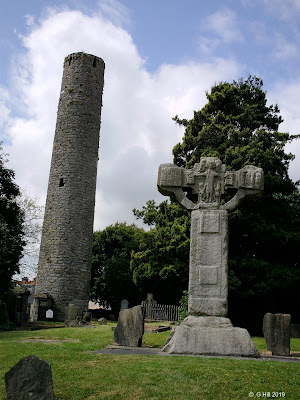 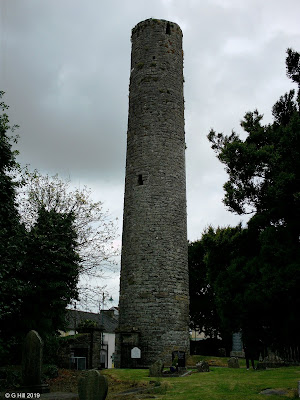 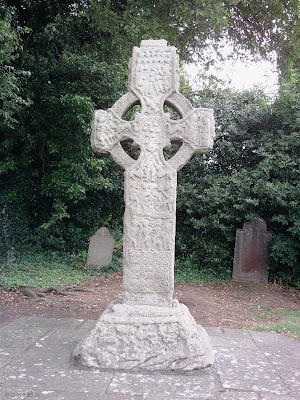 Above Image: The South cross 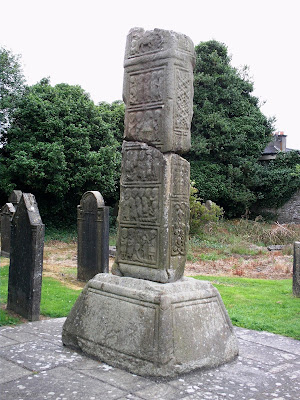 Above Image & Below Image: The West cross 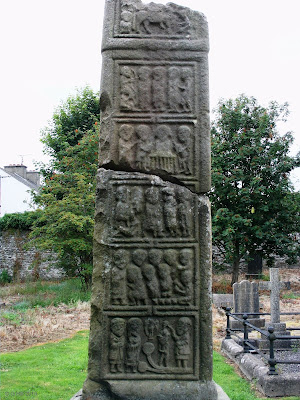 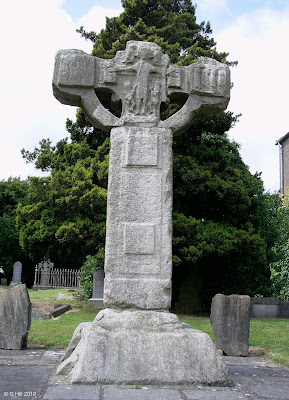 Above Image: The East cross 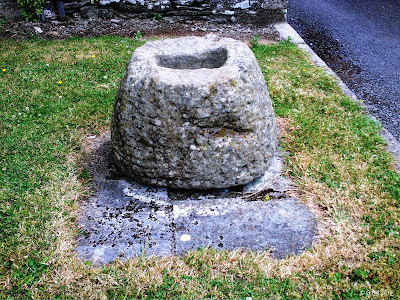 Above Image & Below Image: Remains of the North cross 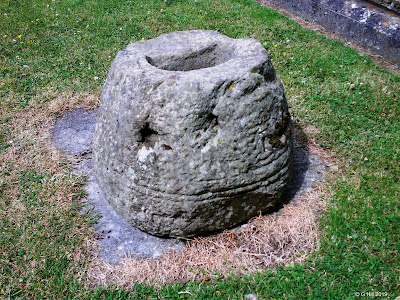 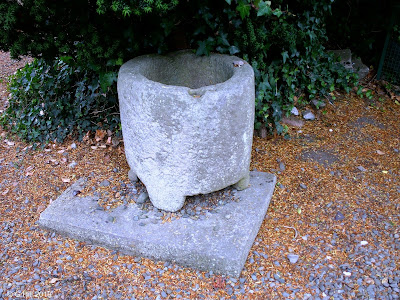 Above Image: A Font? 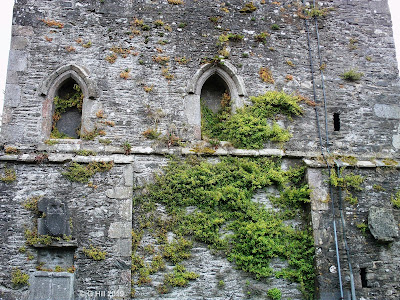 Above Image: Base of church tower 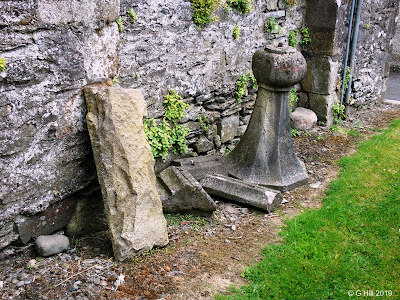 Above Image: Remnants at the church tower base 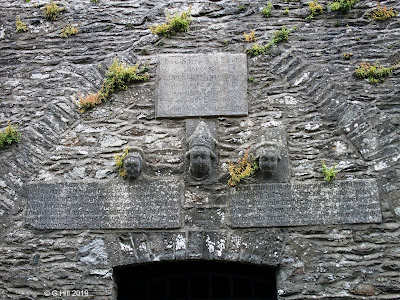 Above Image: Carving and inscription on church tower 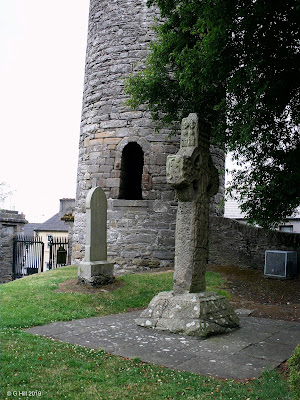 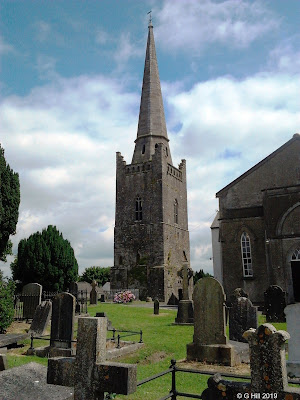 Above Image & Image Below: The church tower 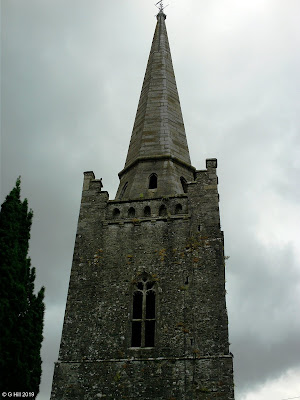 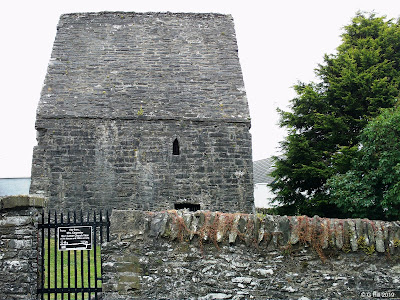 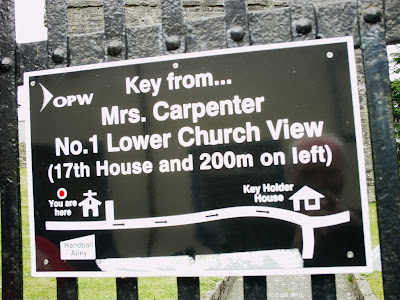 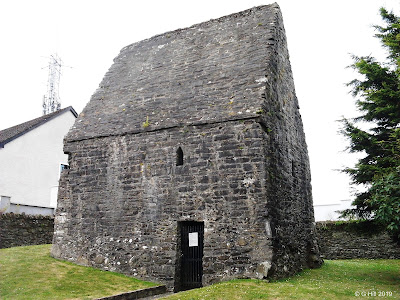 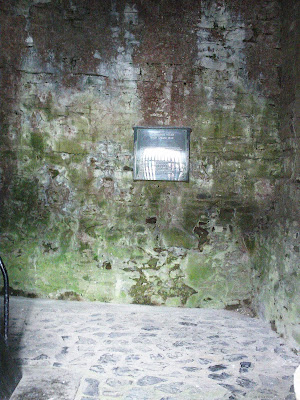 Above Image: Interior of oratory 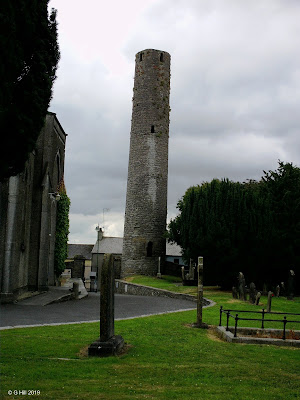 The name "Kells" is derived from the Gaelic "Ceanannas Mor" which translated means "Great Residence". Indeed Kells was a very important town during the Anglo-Norman times.
The first religious settlement here was founded by St Columba (or St Colmcille as he was also known) in 550AD. Thirteen years later he went into exile finding himself on the Scottish island of Iona where he created another successful settlement. But in 795AD it was attacked by Viking raiders and underwent several more raids in subsequent years leading to the relocation of the monks back to Kells where lands were given to them to avoid further attacks and slaughter. Things remained calm for over a century until in 919AD the Vikings began raiding Kells.
The first church in Kells had been completed in 814AD and later the relics of St Columba were transferred from Iona. The great round tower was constructed during the 10th century more than likely acting as a safe haven during Viking raids.
The famous and beautifully crafted "Book of Kells" is thought to have been at least started here in Kells during the 9th century but historians are unsure regarding it's completion as this may have taken place elsewhere.
The 26m high round tower dominates the site and sports the unusual feature of having five windows instead of the usual four. The doorway was originally 12 feet above ground as the street level is higher these days and was accessed by way of a wooden ladder which would have been withdrawn into the tower during attacks. The conical cap is missing and this is generally put down to damage possibly from lightning strikes. The tower has some bloody history to it in the fact that in 1076AD one Murcadh MacFlann, a former King of Mide was brutally murdered in the tower by Olaf son of Maelan and King of Galenga, a small kingdom North of the River Liffey on the East coast. But Murcadh's death was swiftly avenged as Olaf himself was slain by Maoiseachlainn who within twenty years would himself become King of Mide.
This site is really interesting to walk around as there are quite a few historical items to view. Probably the most notable are the High Crosses. There were originally five, one, known as the Market cross, stood at a different location outside the courthouse in the town but was removed due to frequent damage from traffic. The other four are in the grounds of the current church (built in 1778) which serves the Church of Ireland community. Only the base remains of the North cross but the South cross is intact. It is known as the Cross of St Patrick and St. Columba and contains various carved biblical scenes.
The West cross or "ruined cross" has been badly damaged and only the base and most of the shaft remain. There is a nasty looking fissure halfway up the shaft. It was thought to have been damaged by Viking raiders but it is more likely to have suffered under Cromwellian forces.
The last cross which is the East cross to me is the most dramatic. It is known as the "unfinished cross" as the top section has been left undone giving it an unusual aspect.
We really spent quite some time here as there was a list of items to find including a font and a sundial.
Just a few metres North of the current church is a standalone bell tower. This is the last remains of a medieval church and a spire was added the tower much later. There are some nicely carved heads above the South doorway of the bell tower and a gated vault room within stores some further artefacts.
When you have had a good look around the monastic site take the main gate which is to the East of the new church that leads onto Church Lane. Turn left as you exit the gate and walk along the boundary wall of the graveyard for approx 180m and you will see the ruins of the Oratory of St Columba, a small stone structure with a steep bevelled roof. The building dates back to the 9th/10th century and may have been used to house the relics of Columba when they were retrieved from Iona. The doorway that you can enter by today is not the original one.The original doorway (now bricked up) was in the West wall. A key for access can be obtained from a house near the main gate of the church (details are posted on a sign on the oratory gate).
So quite a bit to be seen then and on a good day it is a very pleasant way to spend an hour or two. If you have children, make up a list of things to find in the grounds, they'll have plenty of fun running here and there trying to locate them.
To find the ruins take the M3 motorway heading North and continue until you reach the end of motorway sign. Just beyond this is a roundabout, Take the third exit to the right signposted N52 for Dundalk and then take the first exit on the subsequent roundabout again for the N52. Drive for approx 1KM until you come to another roundabout. Take the third exit signposted for the R147 to Kells and drive approx 500m until you see a Supervalu store on your right. Just past this take a right hand turn onto Circular Road. Follow this road down to the junction with Cannon Street (R163). Turn left and drive approx 200m up Cannon Street and you will  see the round tower on your left. Public parking is available on this street and there is an an entrance gate by the round tower. If it is closed the main entrance is on the junction of Market Street and Church lane.
Posted by Castlehunter at 12:44 1 comment: