In the area of Rathdown which covers part of both Dublin and Wicklow there are five ancient stone crosses most dating to around the 12th century and bearing carvings of either the Crucifixion or Pagan God heads. They are scattered over the area some having been removed from their original sites but all still visible and well worth your time spending a day seeking them all out. They are known collectively as "The Fassaroe Crosses" and because of the proximity of them to each other it is speculated that a number of them may be the work of the same stonemason. Below I have listed them individually. 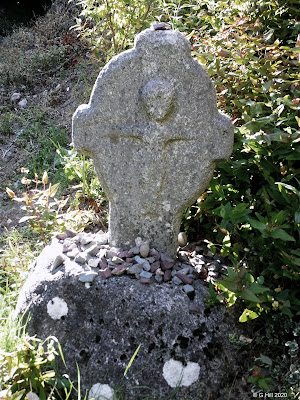 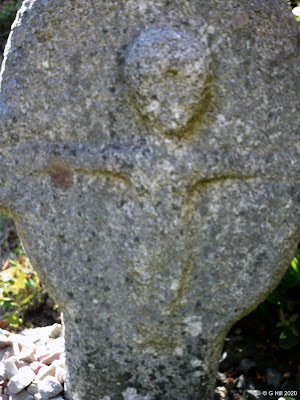 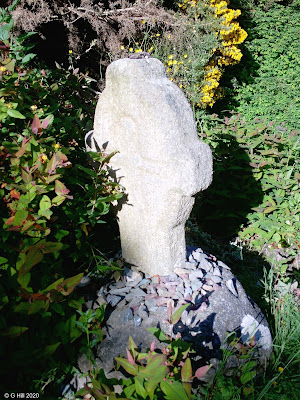 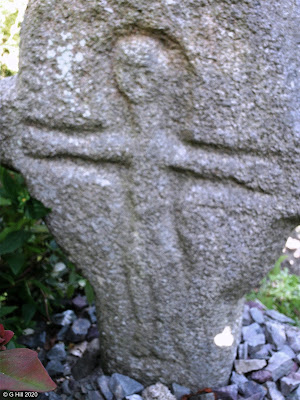 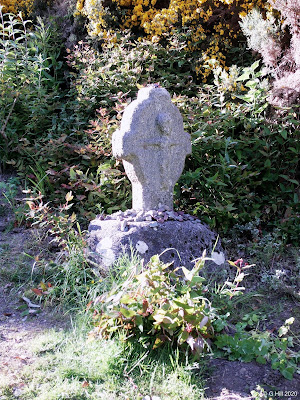 Situated in South County Dublin this small charming cross was initially slightly difficult to locate. We eventually found it nestling in some bracken and wildflowers up a narrow lane. It stands approx 100cm high on a base that is between 50-80cm high. The cross has very distinct carvings of the Crucifixion on both sides. On the South-Eastern facing side which first greets you the figure is in relief while on the North-Western face it is in false relief. The cross, along with the Kiltuck Cross (see below) were originally to be found together at the Shanganagh Demesne in an ancient Church which is now, if even still extant, lost amongst overgrowth and surrounded by a modern housing development. The cross was moved to its current location when the base was discovered here and takes its name now from the proximity it has with Old Rathmichael Church (see previous post here.)
While not off the beaten track it still amazes me that such an ancient monument such as this is not signposted so that people can view it.
To find Rathmichael Cross take these directions. From the wooden Church of  Our Lady of the Wayside in Kilternan heading towards Enniskerry take the left hand turn after the Church onto Ballycorus Road (R116) and drive approx 600m until you have driven under the motorway underpass. Once you reach the next roundabout turn right onto Mullinastill Road. Two more roundabouts follow and on the second on turn right onto Stonebridge Road (following the sign for Rathmichael). Once over the motorway bridge go straight through the following roundabout onto Ferndale Road. Drive past the entrances to two private housing developments "Rathmichael Dale" and "Hillfield" both on your right and then 200m later you will see an entrance to a development called "Castlegate". We parked alongside a stone wall just inside the road and walked back a couple of metres to a narrow lane just previous to "Castlegate". You will find the cross about 125m up this lane on your right hand side just past the entrance to a bungalow. 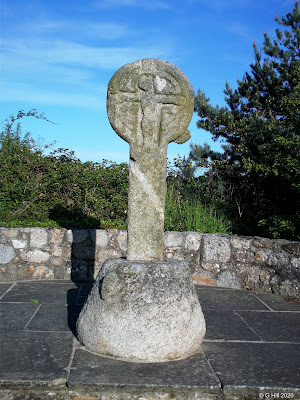 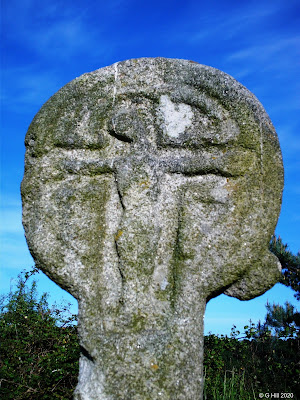 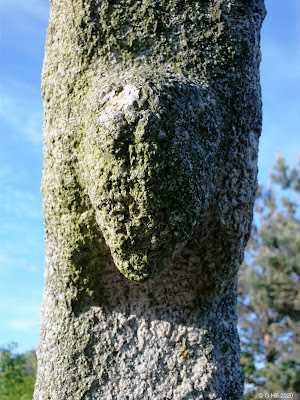 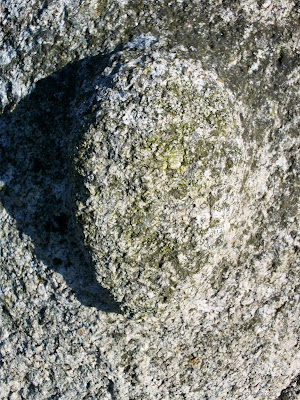 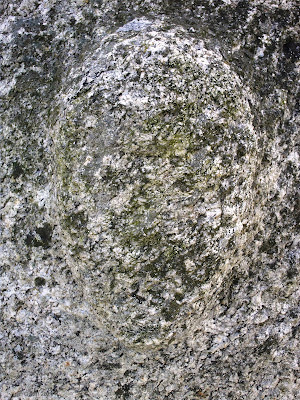 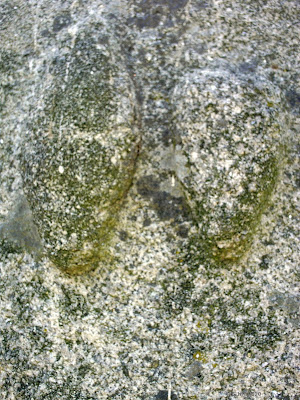 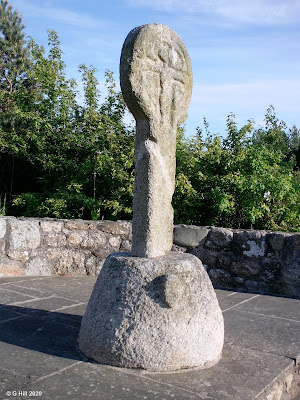 This much taller cross standing at a little over 1.4m is situated  just a small distance over the county border into Wicklow from the Rathmichael Cross. It is commonly known as St. Valery's Cross as it is close to a once thriving estate of the same name. The house  "St/ Valery" which is an early 19th century construct Gothic revival in style is a protected structure but there have been applications made to redevelop it as offices which would be a shame. The cross had been situated on the estate in the 19th century after initially being removed from a woodland area but was moved again to this site to make it more accessible to the public after some infringements had been made on the private land. It now finds itself positioned in a paved area at the side of a roundabout at Fassaroe.
The Western face of the ring of the cross has a Crucifixion scene similar to Rathmichael's and almost Templar in design. The Eastern face has two protruding heads well weather worn but both appear to sport beards and one a Bishop's mitre. Two more protruding heads can be found, one on the South side of the unpierced ring and the other on the strong base of the cross.
The cross while made of granite, a stone readily found in this area, has a diagonal strip of quartz running across the Western side of the shaft.
We visited here of a late spring evening and the roundabout not being a major one was quiet and so we could park easily.
To find St. Valery's Cross take the N11 heading South from Dublin and at junction 6 exit take the 3rd exit on the roundabout following the sign for Fassaroe. cross over the motorway bridge and at the next roundabout go straight through to the following roundabout where you take the 1st exit to the left signposted for Berryfield.. Drive approx 160m to the next roundabout and you will see the cross on an area off the roundabout on your left. There is only cycle and pedestrian access to it but as stated we just parked on the grass margin on the edge of the roundabout as it was quiet 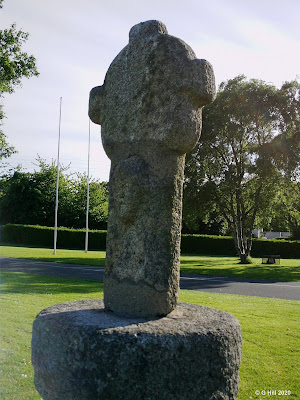 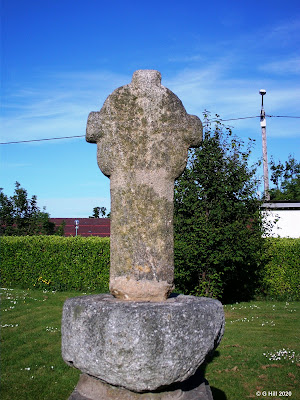 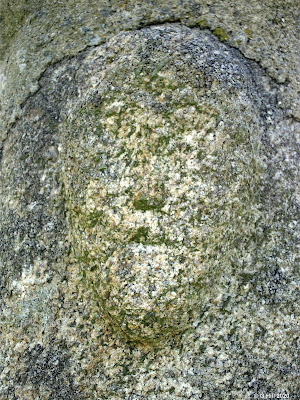 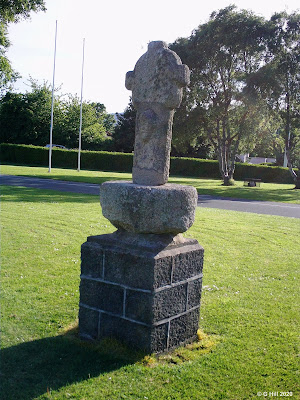 Back into County Dublin and in the grounds of St. Anne's Church in Shankill is where you will find the present location of the Kiltuck Cross. This cross along with the Rathmichael Cross were originally situated in the ruins of Kiltuck Church in Shanganagh Demesne a now non-extant medieval church dedicated to St Tucka which was at it's peak during the Norman times. I can find no real information on this Saint other than the name of the church is derived from "Church of Tucka" - Kil-Tuck. The cross was later discovered in a bad state of repair alongside the Rathmichael cross but was rescued and in 1983 was given a permanent spot in St. Anne's grounds. Unfortunately the original base and cross were then cemented to a rather rashly produced plinth made of what looks to be modern breeze blocks which to me detracts from the ancient and artistic stone masonry above.
The original cross and base stand at approx 1.2m high and the ring contains a crucifixion carving on the Western facing side and a single carved head on the East side.
The cross is on a grassy area with an adjacent car park and is easy to access but unfortunately of late since I photographed it a small fence has been erected around it with small bushes growing about the base. In some ways this is a godsend as it hides the unsightly plinth.
To find Kiltuck Cross take the N11 heading South from Dublin. When you have reached the roundabout at Loughlinstown where the M11 motorway begins take the left hand exit for Shankill (R837) and drive for approx 1KM where you will see the entrance to St. Annes on your left. Ample parking available in the grounds. 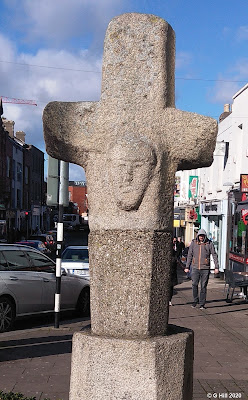 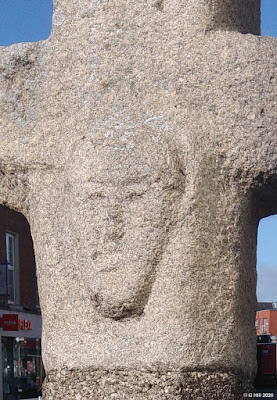 This cross while part of the Fassaroe group may actually date earlier to the three posted above. Some think it could have originated in the eight or ninth century.
The cross has led a nomadic existence beginning it is thought as part of the settlement of St Mochanna (see previous post here). It is known to have been moved to Blackrock when the Cheevers of Monkstown Castle (see post here) brought it there in 1678. It was passed on through the Byrne family and was utilized later sometime after 1765 as a marker for the then city limits of Dublin. In 1870 when boundaries changed it found itself embroiled in a removal issue as local authorities deemed it to be an obstruction. Locals saved it from destruction and it stands today, minus the large cylindrical base which it had stood on, replaced by a long and leaner stand. It is situated on a plaza in front of the Bank of Ireland on the Southern end of the main street.
The cross itself measures 76cm high and has no ring. There is however a carved head in relief similar to the one on The Kiltuck Cross but because of the speculation on the date of the Blackrock Cross it has been suggested it may be that of a Pagan God.
Being located on a fairly busy street made parking a little difficult but there are disc parking spaces along the main street so if you visit outside of rush hour traffic you should be O.K.
To find the cross take the N31 exit onto Mount Merrion Avenue from the N11 and drive the length of the avenue until you reach a T-Junction with the R118. At the traffic lights here turn right keeping to the left lane and a few metres on take the left turn signposted for the L1009 for Blackrock. This leads onto the Main Street. The cross is located at the end of this street on your left just before the junction with Carysfort Avenue. There are disc parking spaces along the street prior to the location of the Cross. 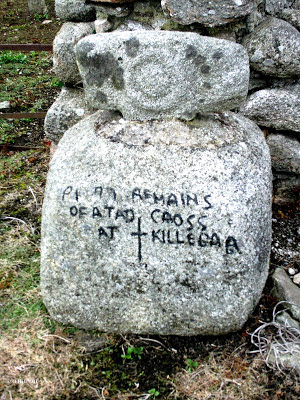 Back over the county border into Wicklow this last cross is probably the remotest of the Fassaroe group and will take the most time to get to. It is to be found on the Western end of the ruins of the old Killegar Church which is a bit off the beaten track in fields between the Monastery and Killegar roads near Enniskerry.
All that remains of the cross is the cross-head which has been placed on a large rounded stone base.
The cross-head measures approx 43cm in width and 22cm in height. The West face has a Boss (a term for a rounded protrusion) surrounded by rings, both of them in relief.
A roughly written description has been made on the base proclaiming it to be the remains of a "Tau" cross. Tau crosses are more likely made of wood but not exclusively and are quite rare in stone form in Ireland. The name is derived from the shape of the last letter of the Hebrew alphabet and the nineteenth letter of the Greek alphabet. Basically a T shape. While this cross-head looks very much like a Tau it is quite possible that since it is missing its shaft it could also have lost the upper part as well. The declaration on the base may simply have been down to the perception of the individual who discovered it and what the particular state it was in upon discovery. If it is indeed a Tau then it makes it very interesting indeed.
As I have mentioned access to the site while not difficult is more time consuming. There are a couple of routes available one of which means traversing farmland. The route I followed was by way of an old "mass path" leading from a roadside stile on Monastery Road. For details of this route follow the directions given in my previous post on Killegar Church ruins (here)

So there you have it. A fine collection of ancient crosses some definitely from the same period and showing more than a passing resemblance to each other. All are worth seeing and if in the same day can be quite rewarding. Probably the best order to see them logistically speaking would be Blackrock, Kiltuck, St. Valery's, Rathmichael and  then Killegar. But however you choose to do it, Enjoy!