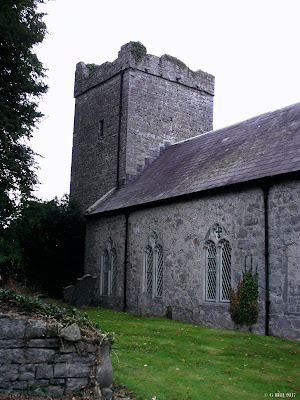 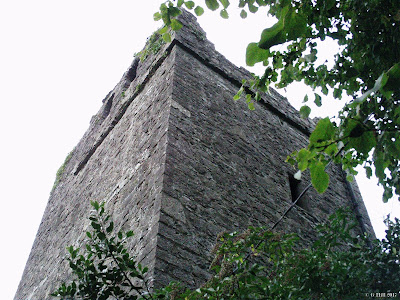 Above & Below Images: The medieval tower 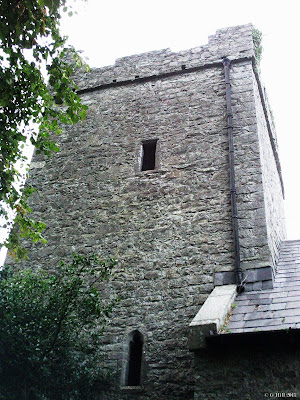 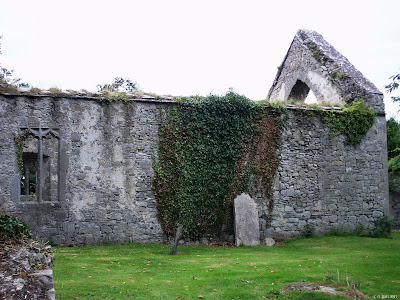 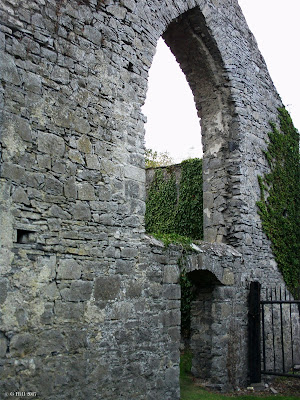 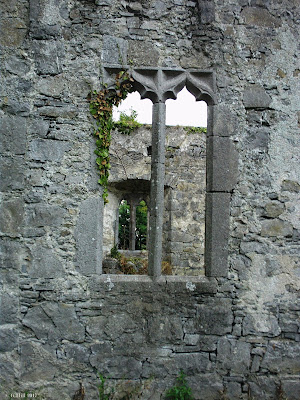 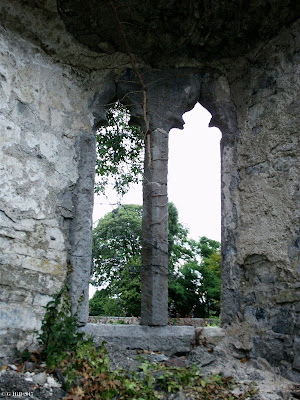 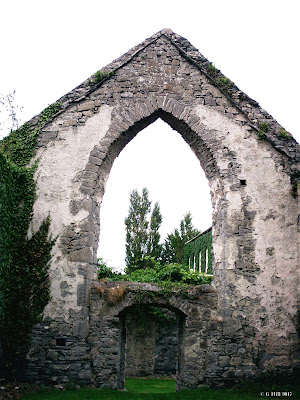 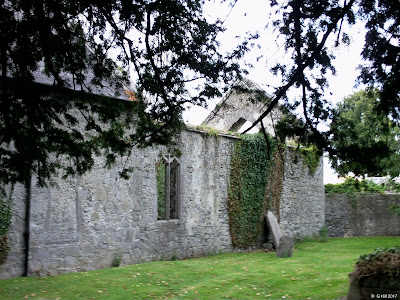 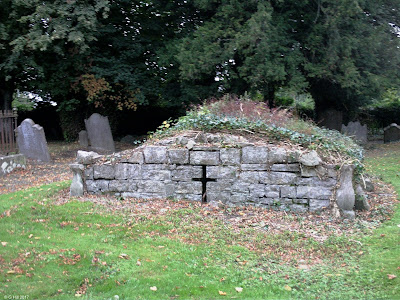 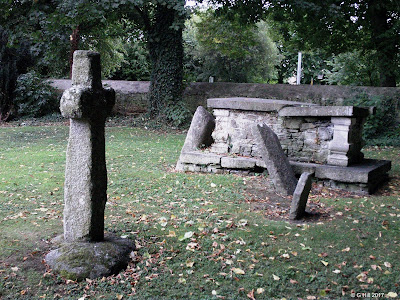 Above & Below Images: The ancient granite cross 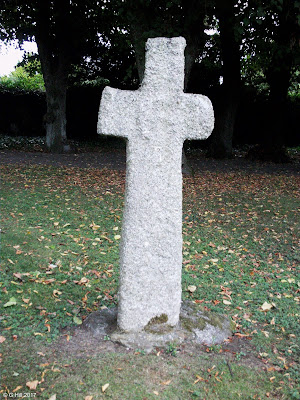 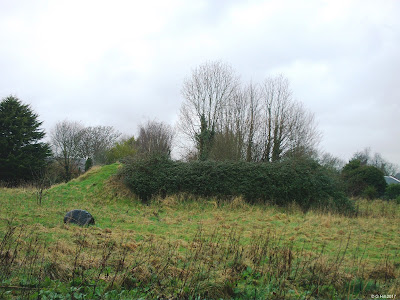 Above Image: The Norman Motte in Winter 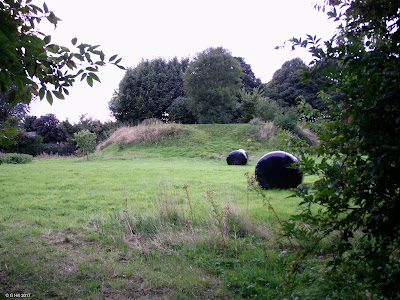 Above Image: The Norman motte in early Autumn (What looks
like large bowling balls are actually hay packed
in polythene)

I was visiting nearby Newcastle Lyons Castle and spotted what looked like another Castle tower in the grounds of St Finians graveyard. I did not have time to investigate then so I returned recently to take a closer look. Indeed it was a tower and it looked as if it was in pretty good shape. Attached to it is a church still in use and on the East end of the Church are the ruins of the former medieval Church. This part is in fact the original chancel where a great arched window once existed. In the 1600’s with the church now belonging to the Church of Ireland and with a waning of patrons the chancel was deroofed and the window moved to a new gable in the East side of the nave that divided the nave and chancel and created a smaller church. The current single cell church in use was built on the site of the medieval nave in 1775. The tower and chancel are all that remain of the medieval structure which was built in 1400 and was deemed a church of the royal manor of Newcastle. The tower served as a residence for the clergy but was also an important defence along the border of the pale as was its nearby neighbour Newcastle Lyons Castle (See earlier post here). The tower now sporting two new wooden doors is still in use by the church. Th chancel ruins have an entrance door below the great arched aperture where the glass had once been positioned.
Within the graveyard which has been in use since medieval times there are a number of ancient grave markers and also a very interesting granite cross. This cross and an adjacent pillar stone are thought to have been erected in early medieval times or even before as they denote the existence of an early Christian monastery. The cross has a weather worn image on it of a cross within a circle.
Looking West over the boundary wall of the graveyard you can clearly see what are the remains of a Norman motte, an artificial mound upon which a Castle structure would have been placed.
There is quite a bit of history to see here in Newcastle and is well worth a visit. Also locally there is a Holy well dedicated to St Finian and I will return soon and post some photos of it.
To find St Finians head West on the N7 from Dublin and take exit 4 for Rathcoole. At the roundabout at the top of the it exit ramp take the second exit for the R120 and drive until you reach another roundabout. Turn right here crossing the bridge over the N7. Go straight through the roundabout on the other side and follow the R120 passing straight through four more roundabouts until you enter the main street in Newcastle. Drive through the village and at the other end just before some abandoned deroofed cottages on the right there is an area to park. There is a path through the trees here that leads to the gates of the graveyard. The gate looks locked but usually just has a chain tied around to keep the gate closed. 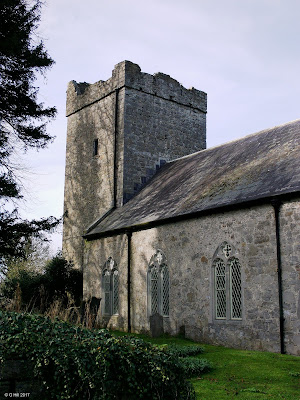 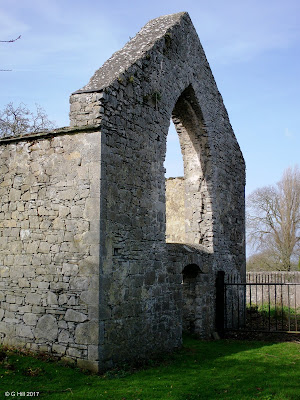 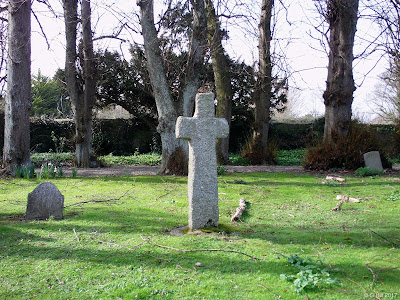 Above Image: The granite cross 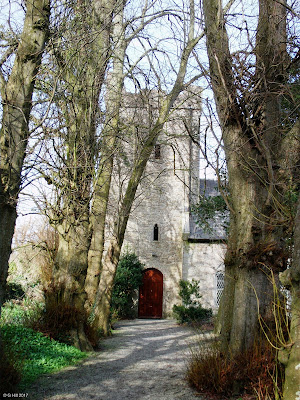 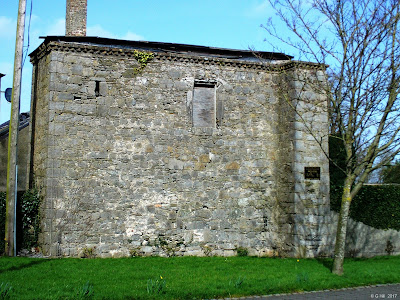 Above Image: Remains of the glebe house 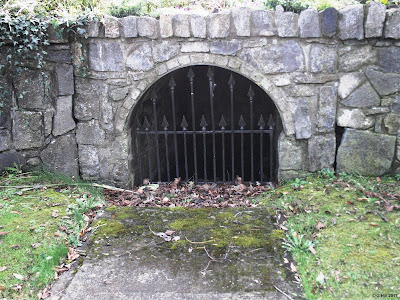 Above Image: well opposite the glebe house 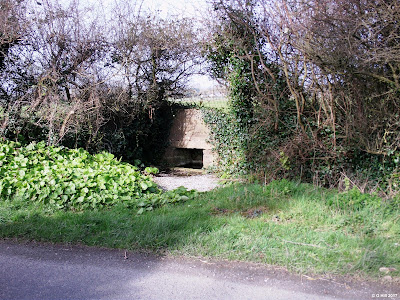 Above & Below Images: St Finian's well 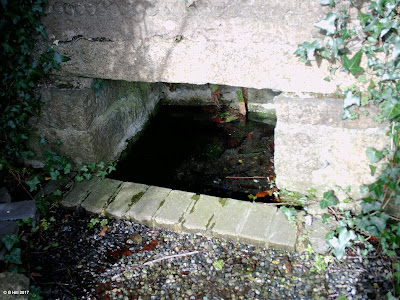 As mentioned above a second visit here was on the cards and I managed to get the chance fairly quickly. The day was a much brighter one than previously so I took the opportunity to take a couple more photos of the Church and cross. I also found the remains of the glebe house adjacent to the Church which apparently is open to the public during the Summer. Opposite the glebe house a gated well is set into a stone wall. This is one of two in the village area but the other and more interesting one one is located nearby on the Lyons road and is known as St Finian's well and has been used as a source of healing for over a thousand years. To find this well just follow these directions. As you reach the end of the village where the Church ruins are located the road bends to the left. Just follow this road until you have passed the castle ruins on your left then take the next right hand turn.and the well is approx 150m down the road on your right. It's tucked away a bit but can be spotted easily enough. To park I would advise on the left hand side a little past the well as this can be a busy enough road and is narrow.