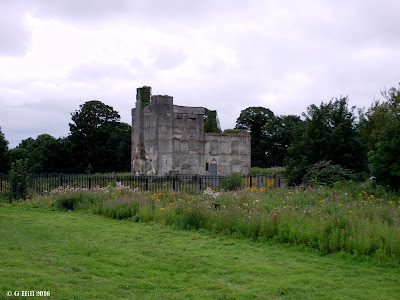 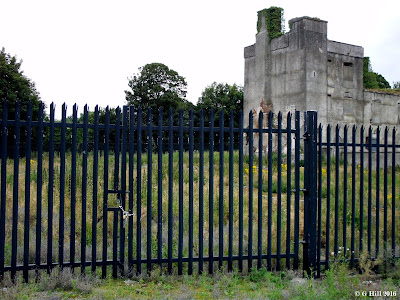 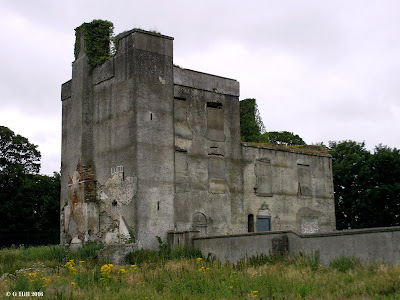 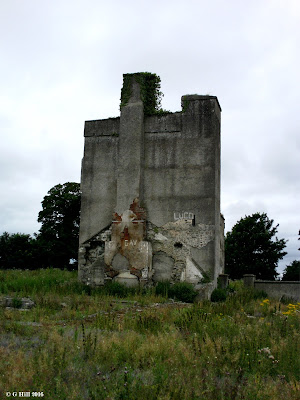 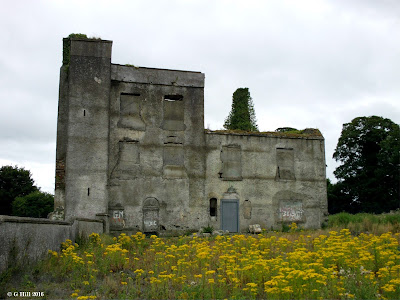 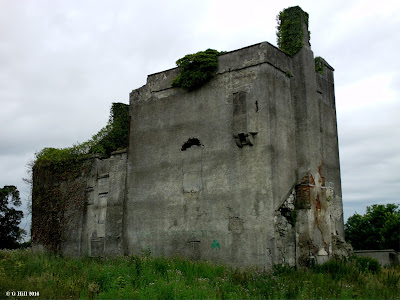 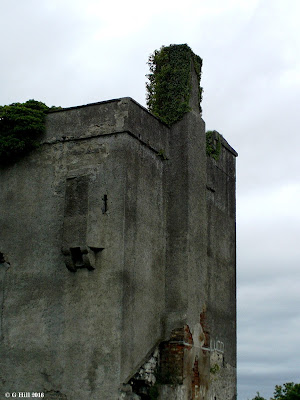 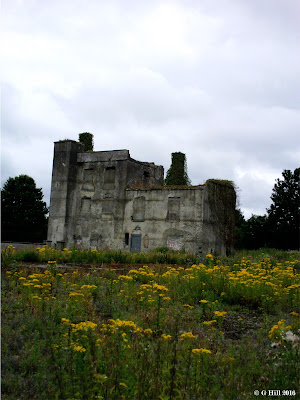 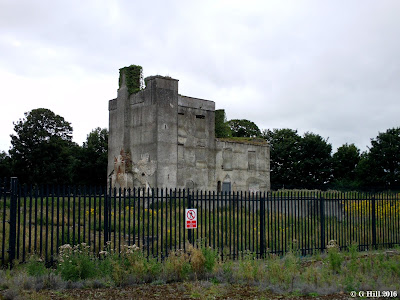 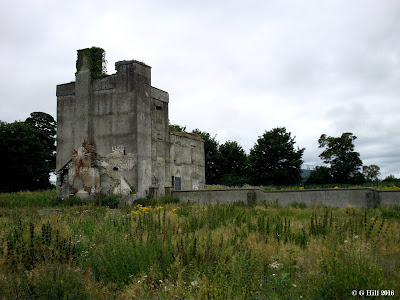 Firstly thanks to Kevin Andrew for putting me in the right direction for this.
Grange Castle is a three storey late medieval tower house that was constructed in approx.1580. The Castle was remodelled around 1750 when a two bay two storey addition was made to its western aspect. Features include a vaulted basement, a tall slim projecting square tower and a garderobe on its Southern side. An antiquarian drawing by Gabriel Beranger from 1773 depicts the tower with crenellations and the new hall attached It also displays some ancillary buildings which have since been demolished  Evidence of a ditch which had a stone causeway over it was discovered in excavations in 1997. A long approach lane once ran from the Castle from its Northern side towards the Grand Canal where there was a gatehouse. In its time it appeared to be quite isolated and this is clearly evident on early ordnance survey maps. Who constructed and resided in the Castle I have still to discover but apparently the site was occupied in some manner until the 1970’s. The development of one of the world’s largest bio-pharmaceutical business parks swallowed up Grange Castle and this park is now about 60% occupied with continuing construction taking place. For years I assumed Grange had been demolished until Kevin posted on the blog mentioning that he had passed it in a car one day. It didn’t take me long to find its location and I made tracks there within a few days.
I visited on the August bank holiday Monday and of course all of the businesses on the park were closed. Nice and quiet then. As there is a through road for traffic there was no problem entering the park but it is a bit labyrinthine and took a few doubling backs on the many internal roundabouts to finally spot the ruins on a large grassy area set back from the road. I parked nearby as there were no restricting signs although security vans were whizzing around at intervals being the day that it was and I’d imagine it would not have been such a good spot to park on a busy weekday. I proceeded after parking to cross the expanse on foot towards the ruin. The ruin has been surrounded by a tall metal fence with a heavily padlocked gate and many warning signs, but you can see all aspects of the Castle by walking around the perimeter. The overgrowth on the West side is a bit rough and I got covered in stickles but otherwise it was fine. The garderobe (or toilet) chute is still intact on the South wall but all of the windows in the Castle have been blocked up with some adjoining parts on the East of the building now missing exposing partial evidence of a chimney. Overall it remains a scarred and rather grim edifice reminding me a little of Athcarne Castle in Co. Meath (see earlier post). The grounds around here are also apparently a haven for bats which are a protected species. I’d imagine at night and coupled with this gaunt ruin the atmosphere must be very eerie. I managed to traverse the whole perimeter hoping in vain for a breach so I could get a bit closer but it was not to be. The secrets of Grange Castle remain firmly locked up to the visitor with maybe the only successful intruder being the occasional bat.
To find the ruin head West on the New Nangor Road (R134) and following the major junction with the R136 you will come to a small roundabout.  Take the right hand exit into Grange Castle Business Park and drive until you reach a roundabout with the company Pfizer on your right. Go straight through the roundabout and you will spot the ruin in the near distance on your left. Try to find a safe place to park which would be too hard if it is not during working hours. There is a small left hand turn lane on the opposite side of the road just before the next roundabout. You could spin around the roundabout at park in there. It’s only a short walk across the grass to the ruin.
SECOND VISIT: MARCH 2021 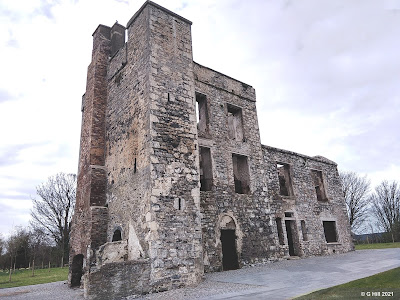 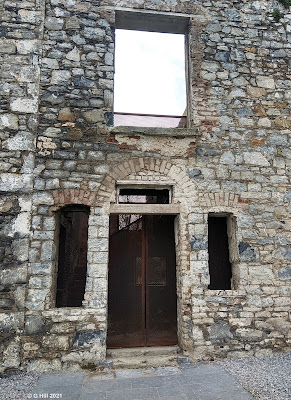 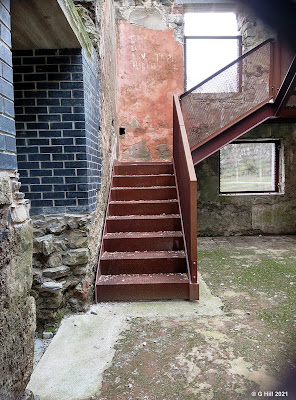 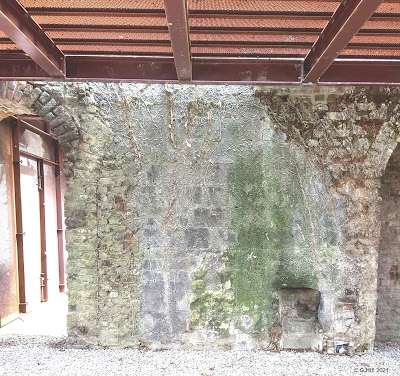 Above Image & Image Below: Interior of ground floor 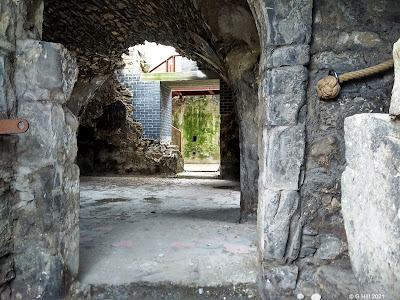 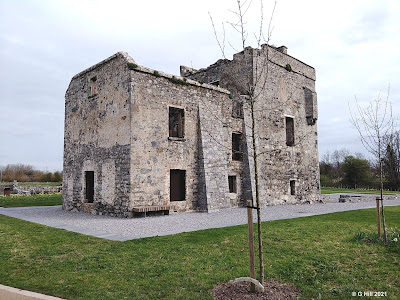 Above Image: Southern facing side 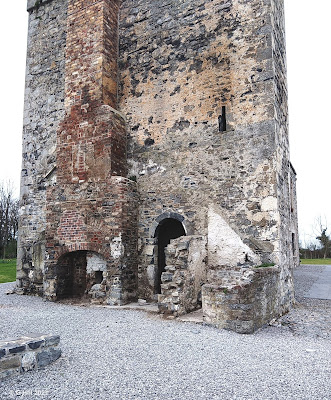 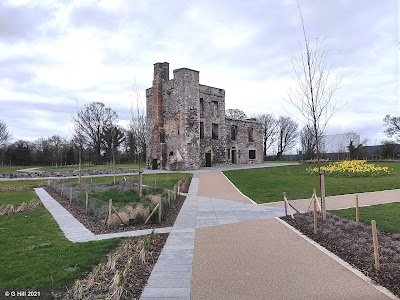 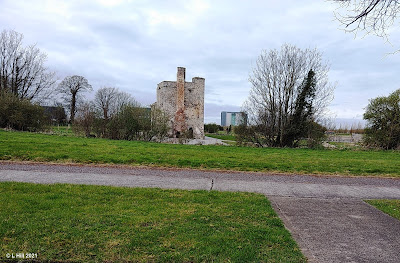 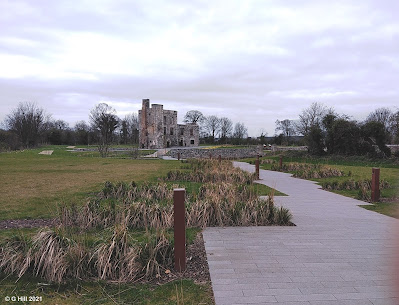 Firstly thanks again to Kevin Andrew (Kibby) for keeping an eye out on this site and advising that works were in place at the castle. Thanks Kev!
On my first visit here as you can see from the original post, this castle was in a very sorry state. But some inspired thinking on behalf of the County Council has seen this transformation take place.
The castle walls have been stripped of the awful cowl it was plastered in and the windows and doors unblocked. Granted, the access is prohibited by mesh in every orifice but I believe that in time the Council will allow access to the interior which includes a tower stairs, but by appointment.only. I will certainly be looking into this.
Peering inside they appear to have added a new stairway and bolstered up any dangerous parts of the wall and on the Eastern outer wall where the exposed fireplace is, you can see now by getting up close that there appears to have been an adjoining building which is now non-extant apart from some foundations and a tiny section of wall.
On our visit there were a few walkers and runners around and although pedestrian access to the castle is now easy, there is no designated parking area. An informative warden told us that parking especially near the Pfizer entrance gate is frowned upon and will draw unwanted attention. He advised parking near the beginning of the pathway and preferably out of business hours. It appear some people are parking cars there all day and commuting into the city by bus.
He also informed us that the lands were up to recent times owned and farmed by the Beatty family. Whether they had any relation to the former castle occupants, I  don't really know. However this was a second trip worth taking and certainly worthy of your attention if you find yourself in the vicinity.