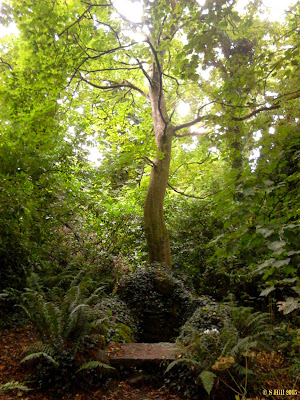 Above Image: Magical location of the well 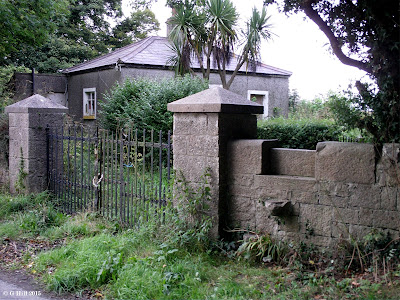 Above Image: Entrance stile to well 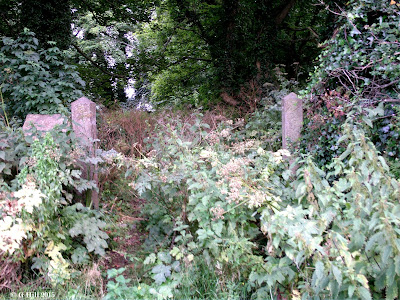 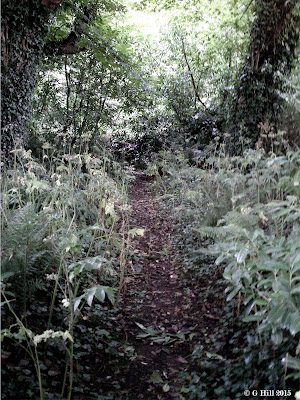 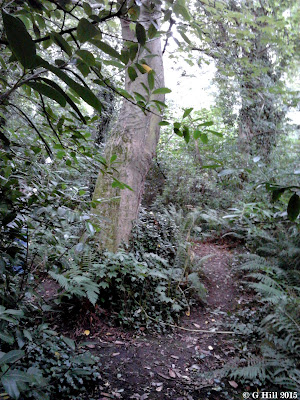 Above Image: well is located behind this tree 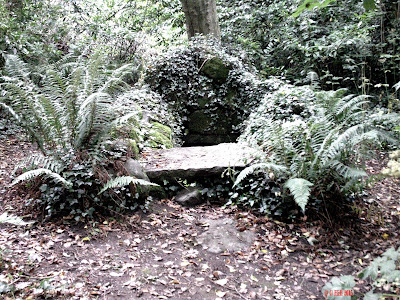 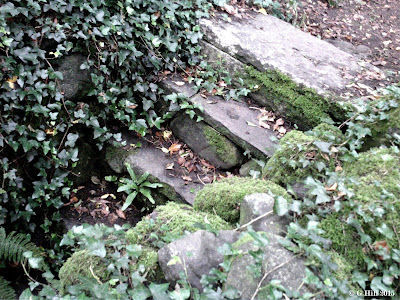 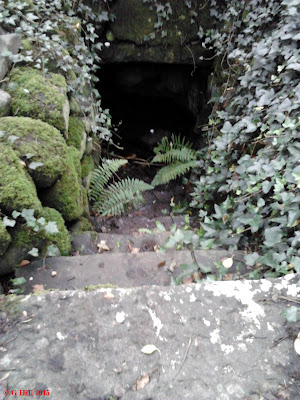 Above Image: Descent to the well 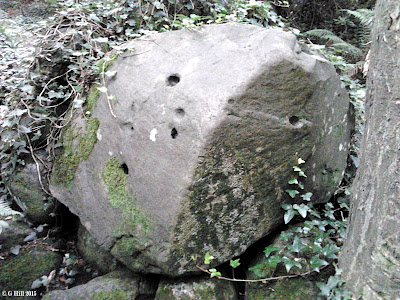 Above & Below Images: Hole and carvings on rocks 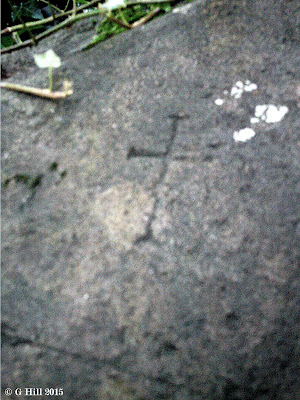 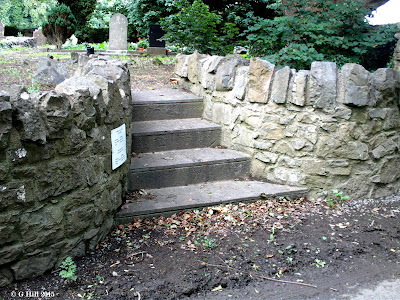 Above Image: Entrance to graveyard 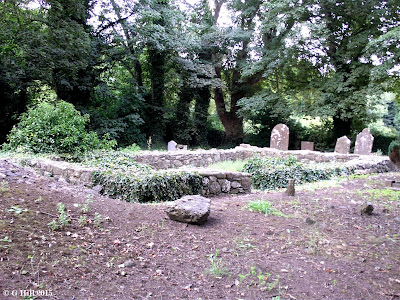 Above & Below Images: Church foundations 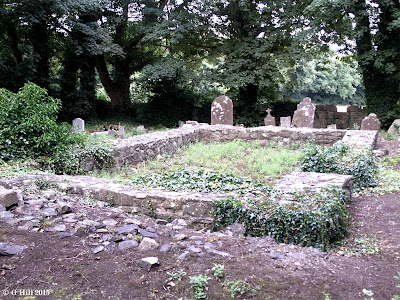 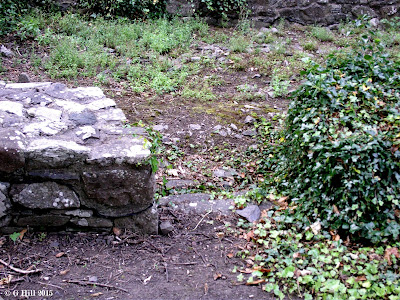 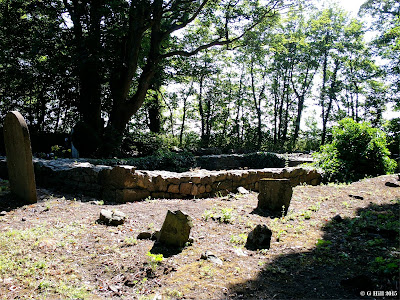 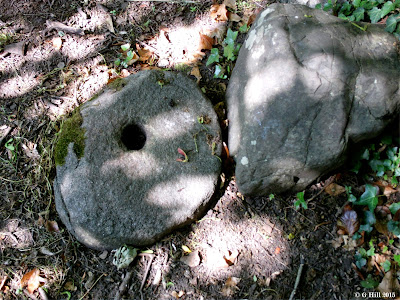 Above Image: A bullaun stone? 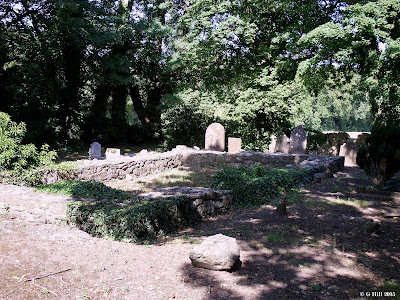 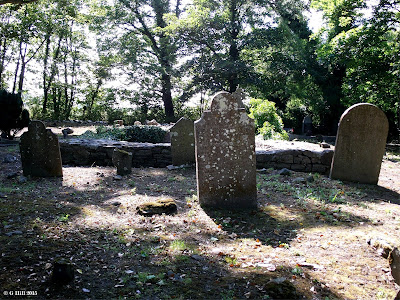 Tucked away on a country road near Skerries these ancient sites are really worth a visit. They are associated with St Mobhi who founded a hermitage here in the 7th century. He is different to the earlier St Mobhi of Glasnevin. The hermitage is thought to have been on the site of the current graveyard.
There are rectangular foundation ruins within this graveyard enclosure which are accessed by either stile or steps from the roadside. The foundations which I’m supposing to be of a former medieval church have a gap in the south side which was probably the doorway. Funnily enough although marked on modern maps these foundations are not marked on historic maps but a mention is made in the Fingal development plan of 2011 that the graveyard contains the remains of a base of a Church so maybe someone out there has a little more info as to It's origin. At the rear of the enclosure is what looks to be a bullaun stone sitting in a random locaton. Walking around this site there is Certainly a very strong atmosphere of antiquity.

About 50 yards further up the road there is a locked pillared gate and to the right a very prominent stile. This is the access point to find your way to St Mobhi’s well. Once over the wall you will see a track ahead of you but this leads to the private property of Milverton Demesne. On our first visit we accidentally followed this route in search of the well and although didn’t encounter anyone we eventually knew that we were on the wrong track as we reached some farm buildings and thought it better that we retreat. At this point I have to thank Jim Dempsey of Megalithic Ireland for putting me in the right direction. The correct route is as follows. Once over the stile turn to your right. What looks like a bunch of brambles actually conceals a gateway with the metal gate now removed. There is a sign on the tree to the left of this gate which says private property. This is new since our last visit but I think it pertains to the other track that we had gone on in error. Anyway bear this in mind while visiting that the well was in the past open to access but things may have changed. Still, with a stile provided and an open gateway one would assume it’s OK.  So, when you pass through the gateway follow the narrow track to the left among the trees. It’s about a four or five minute walk to the well with a few fallen branches to step over and some ferns to brush aside but it all adds to the mystery of this location. The well is located behind a tall tree and the rocky construction placed on top of it is megalithic in style but is more than likely of a much later date. Regardless this site has been visited for over a thousand years so the construction is probably quite old. The well itself is considered to be several thousand years old.  After the debacle of our first visit I was really excited about finding this and I think it looks amazing. A short series of flat steps leads down from the forest floor into the well but be careful if descending as it can be slippery at times near the bottom and I’m not sure how deep the well actually is. The rocks that are built up around the well are also interesting. One large boulder has what looks to be cup marks in it like mini bullauns. There are also crosses etched into two of the stones.  Although we didn’t encounter anyone else on our visit, there were signs of visitors with little trinkets and flowers being left as token offerings. The ivy has a hold on some of the stones but I imagine that in late autumn or winter a lot more would be exposed of this wonderful well. Reason enough for another trip then!
To find the ruins and well take the Junction 4 exit of the M1 for the R132 towards Skerries. Drive for approx. 3KM until you reach Blakes Cross and take a right hand turn for Lusk onto the R127. Drive another 3Km and you will reach the Dublin road roundabout. Take the right hand exit following the R127. You will encounter 3 more roundabouts. Drive straight through the first 2 and then turn right at the third still following the R127 towards Skerries. Continue on this road past a left hand turn signposted for Man O'War and then take the next left turn onto the L1275 for Balbriggan. Drive for approx. 1KM and you will spot the graveyard on your right. There is some parking space at the side of the road adjacent to the graveyard wall. The access stile for the well is a few yards further down the road on the graveyard side of the road.


Addendum February 2016: Planning another visit here soon in 2016 but have noted some changes to the access point on Google streetview. Firstly there is a security sign on the locked gates adjacent to the stile and the gate lodge which was abandoned now appears to be occupied, so we will probably check at the lodge to see if access is still okay. The old trail access to the right of the stile which was fenced off seems as if it might be open but it's difficult to discern on streetview. We will check this in due course. In any event the forest trail to the well appears to have been cleared of debris which is definitely a good sign.

Well what a surprise! The Google streetview images mentioned in the above addendum must be years old. The site remains as it was in our visit last Summer. Nothing has changed. The gate lodge is still abandoned and the old track fenced off. So it was over the stile as before. We wanted to return at a different time of year in the hope that the vegetation and overgrowth would be at a minimum but it was much the same, although there was some more sunlight due to the absence of leafage on the trees. Having visited twice now I think I prefer the Summer visit when the whole site seems to glimmer in a golden glow. Below are a few photos taken on this latest visit 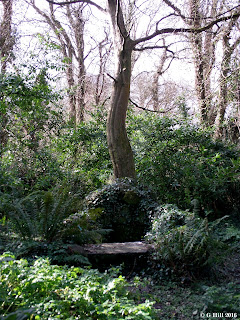 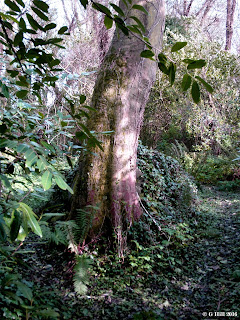 Above Image: Well located behind this tree 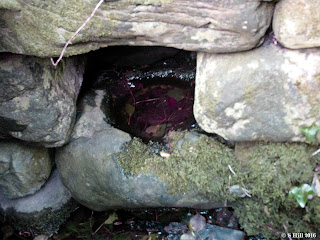 Above Image: A Bullaun stone inserted into the well wall