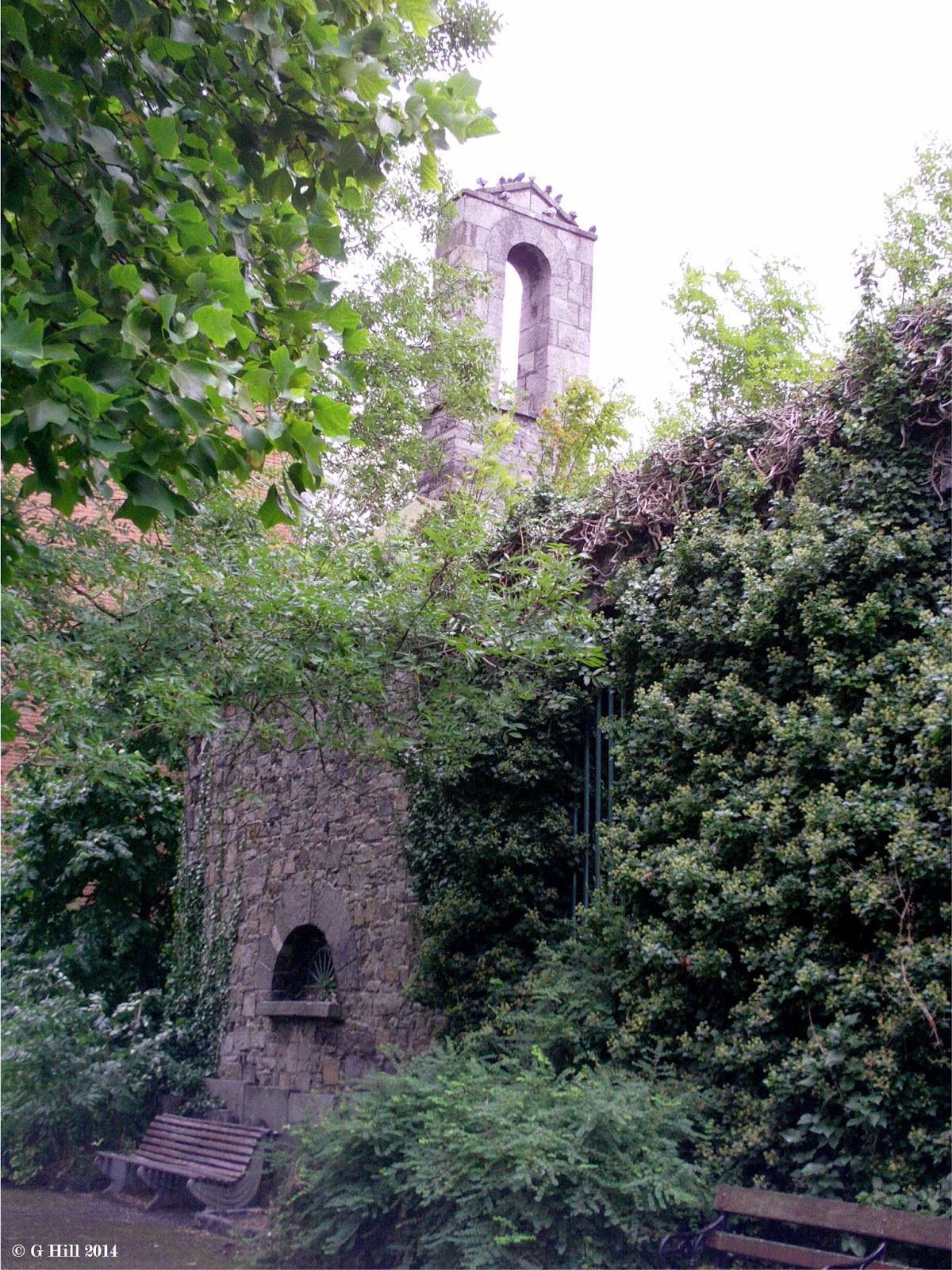 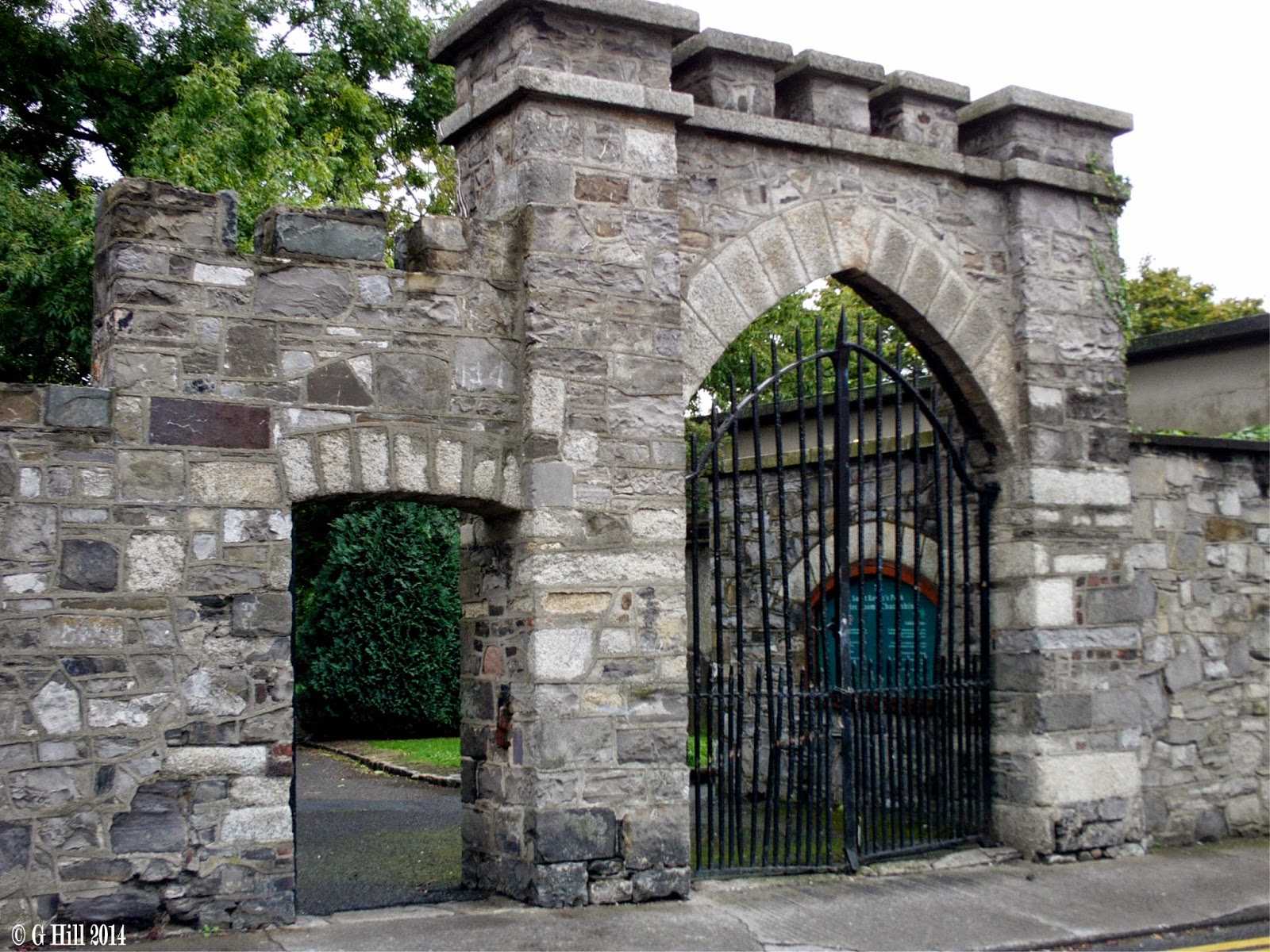 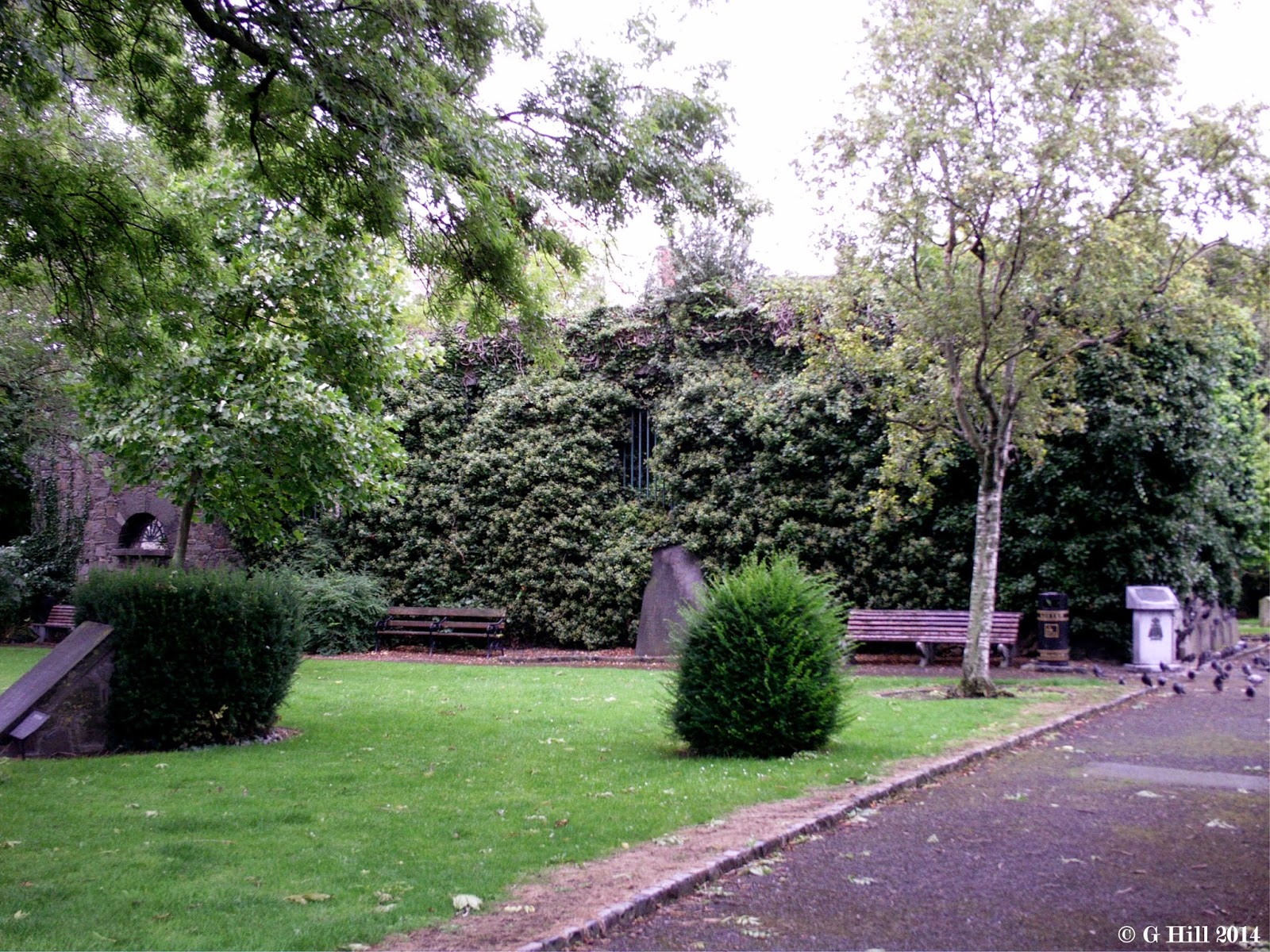 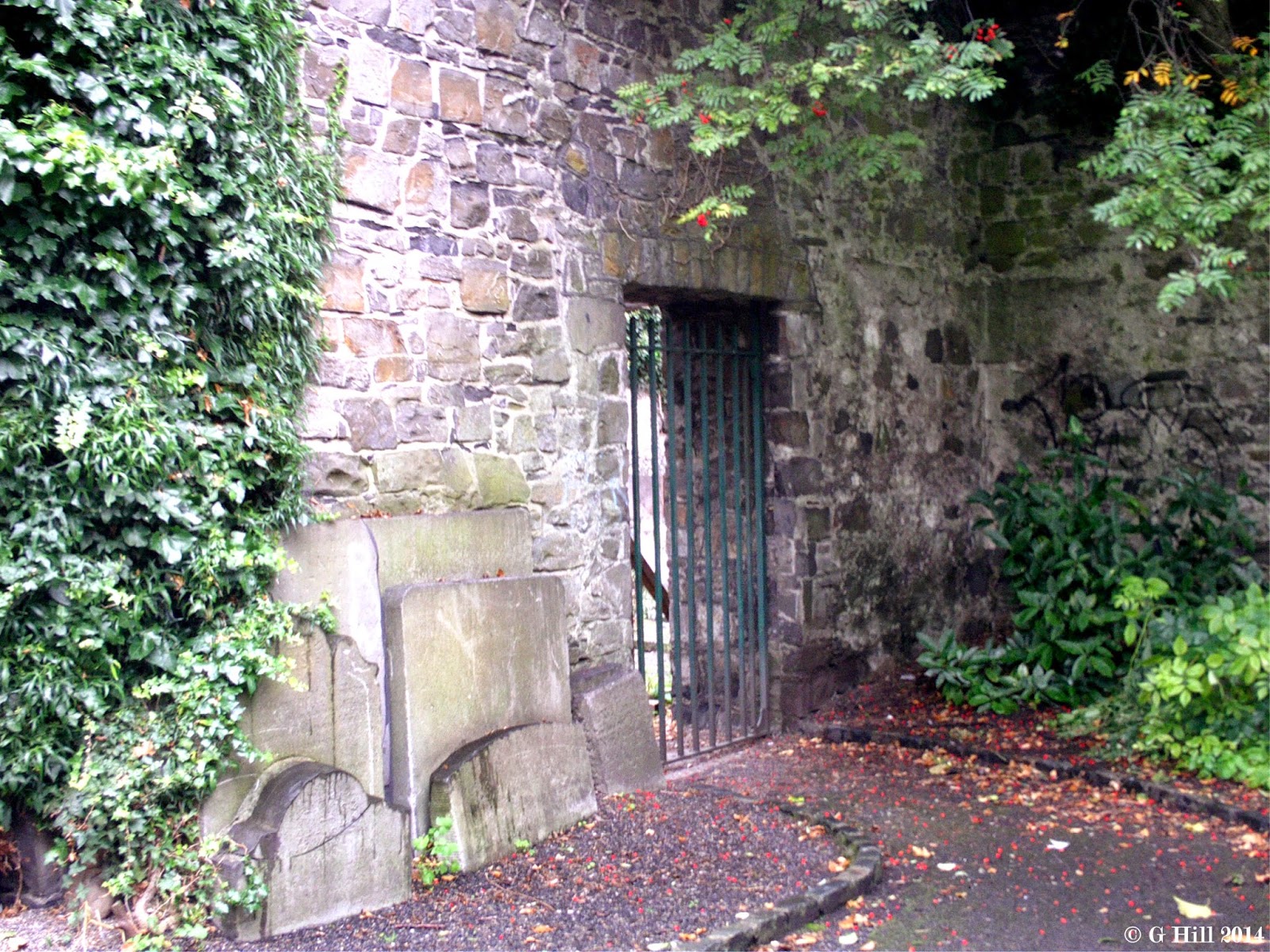 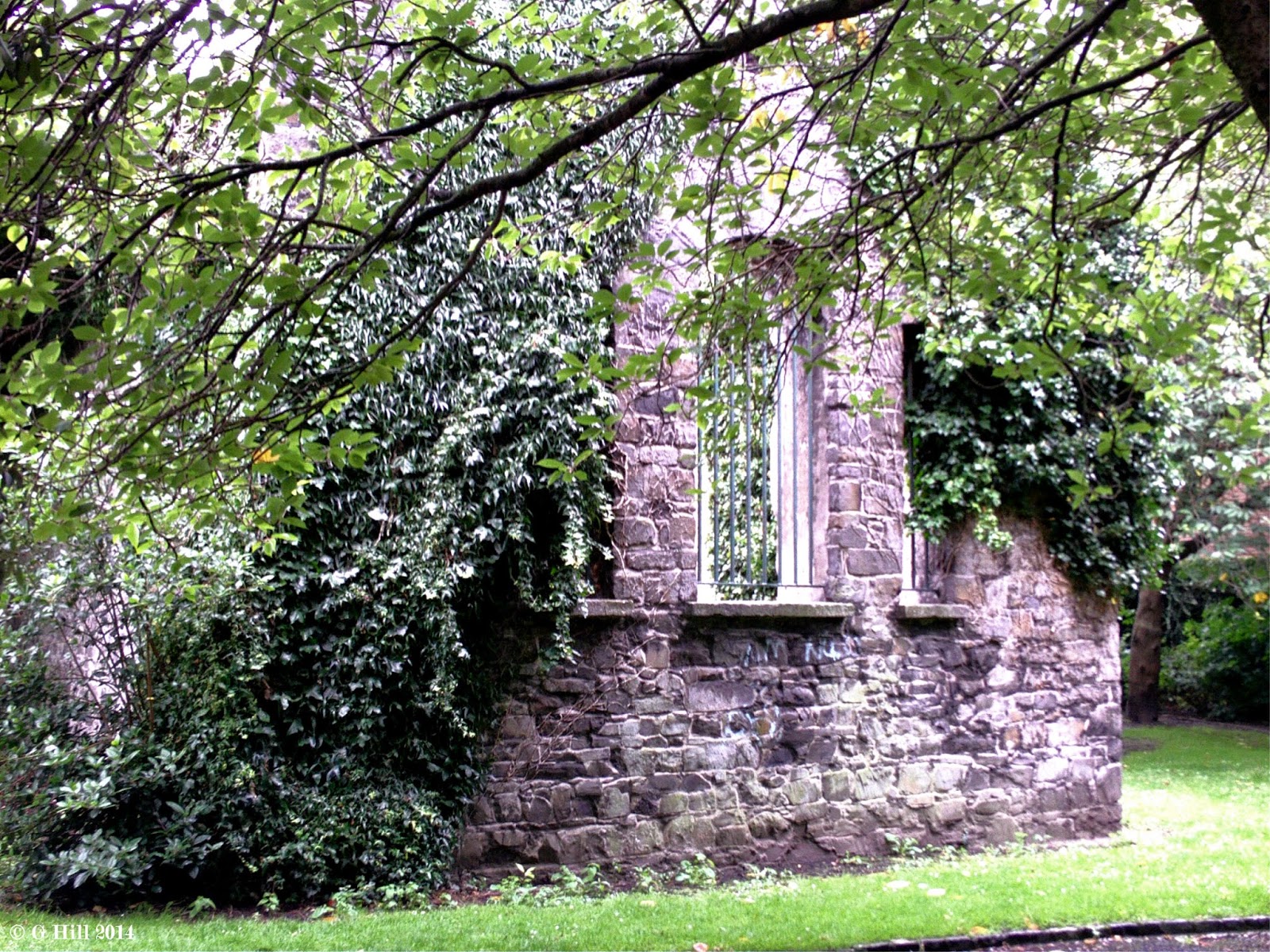 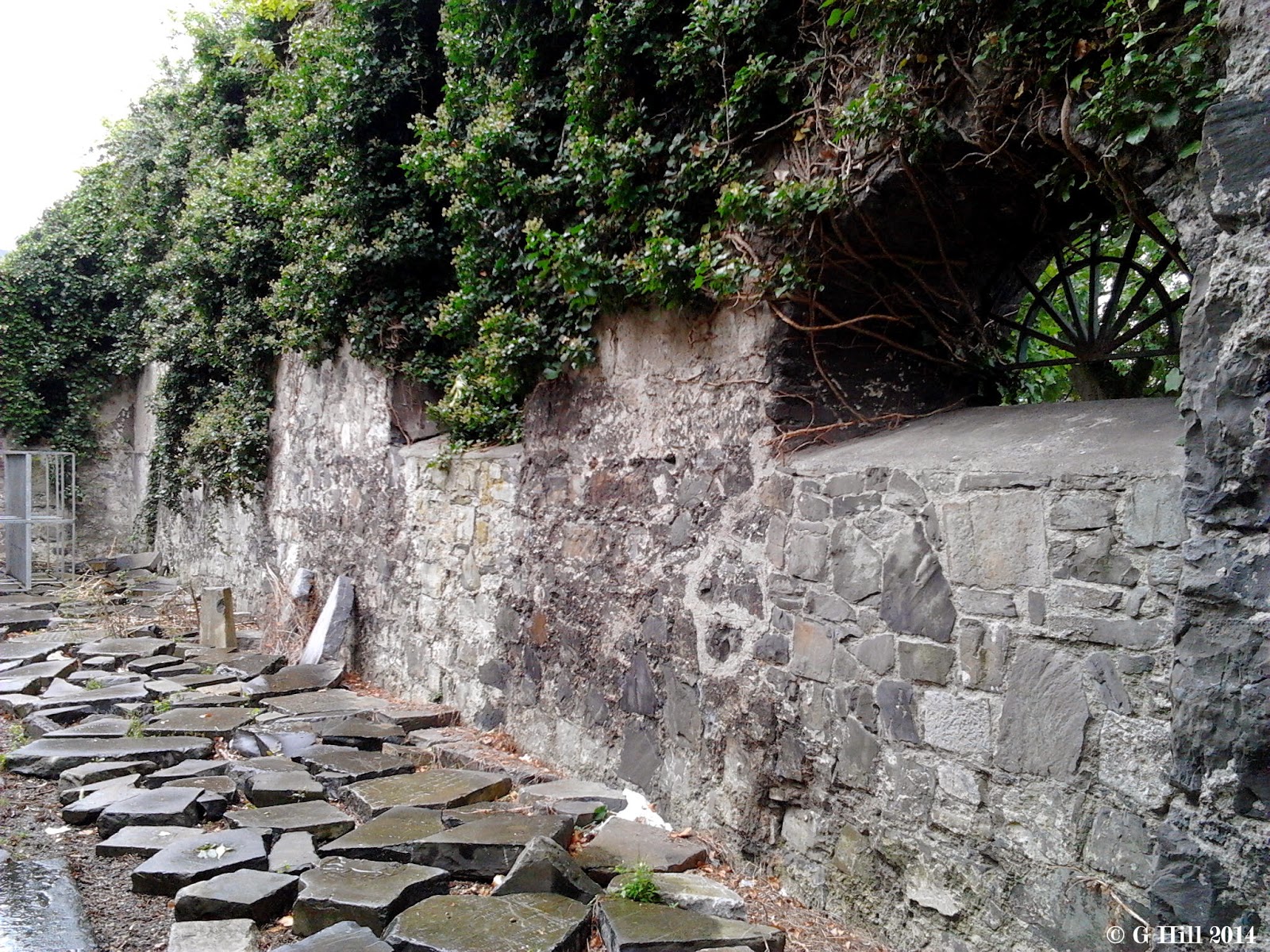 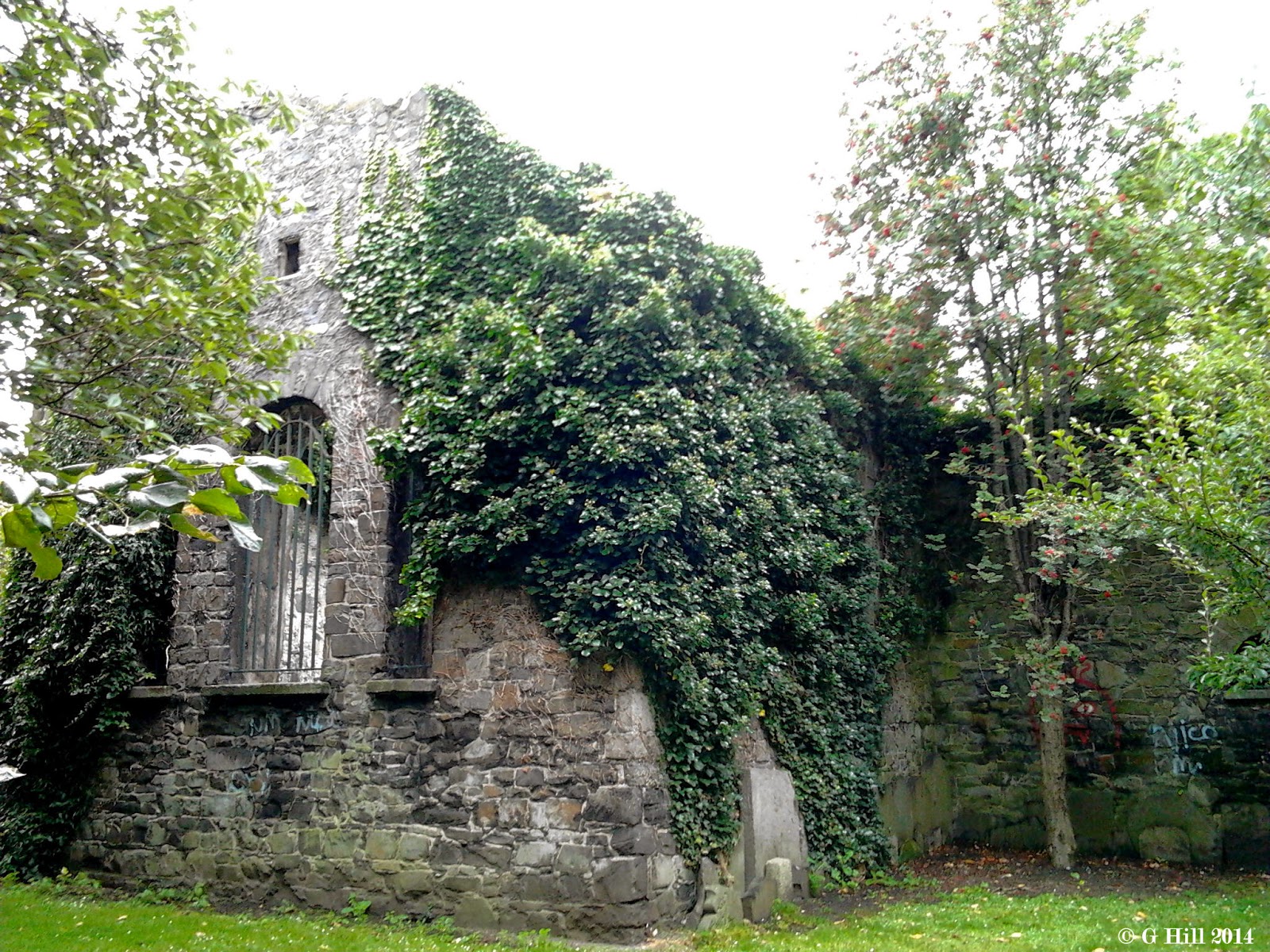 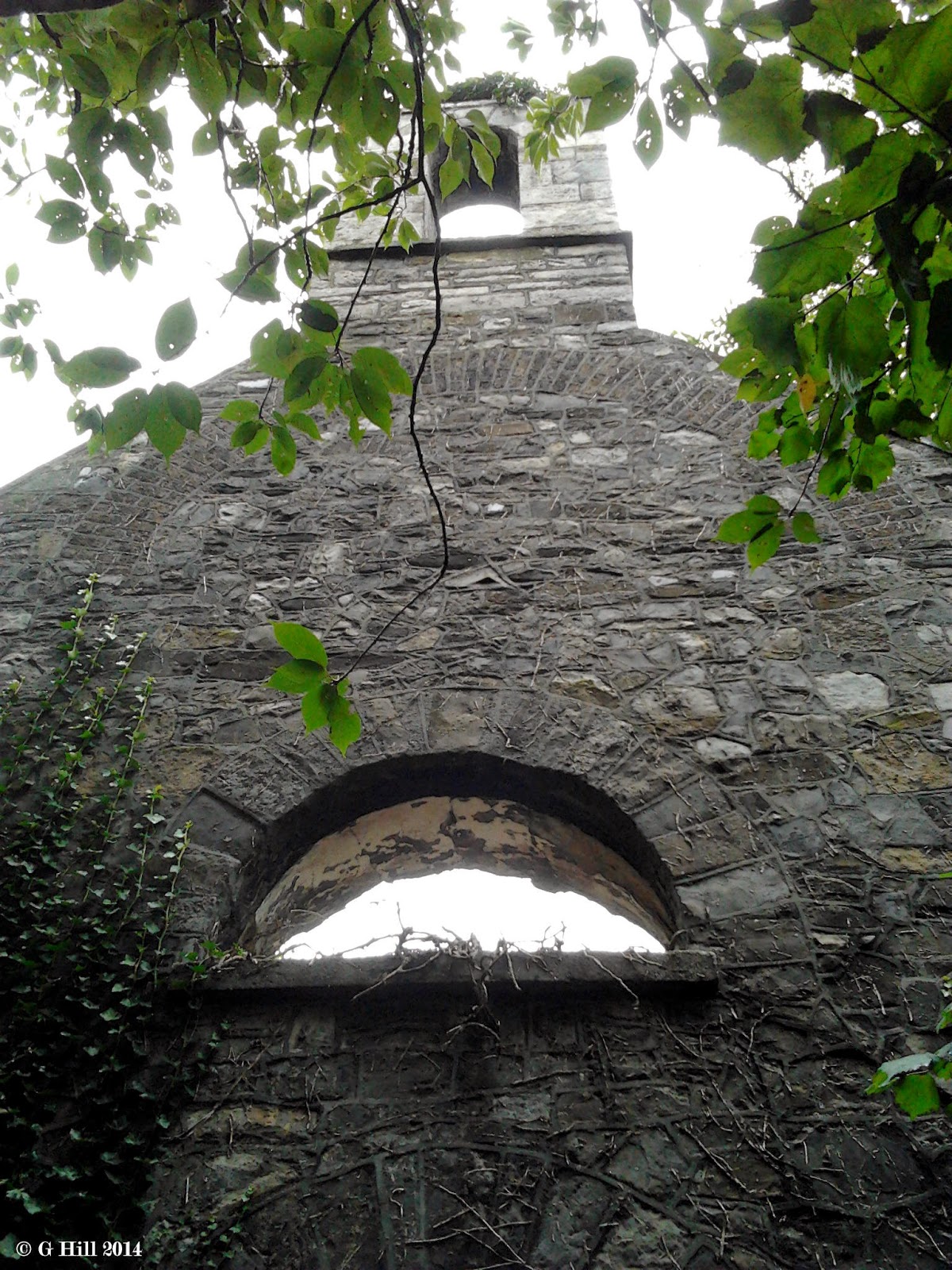 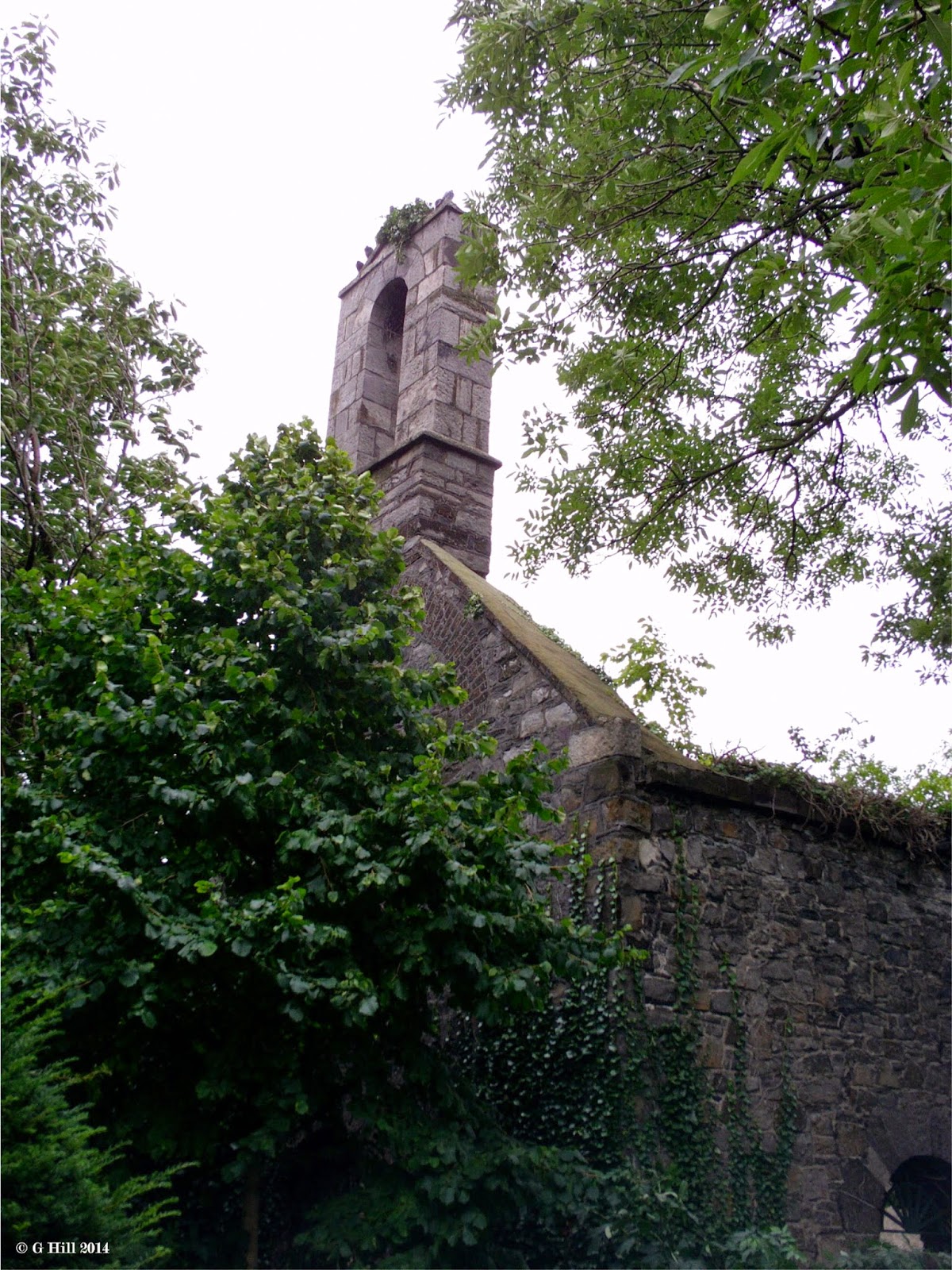 Above 2 Images: The belfry 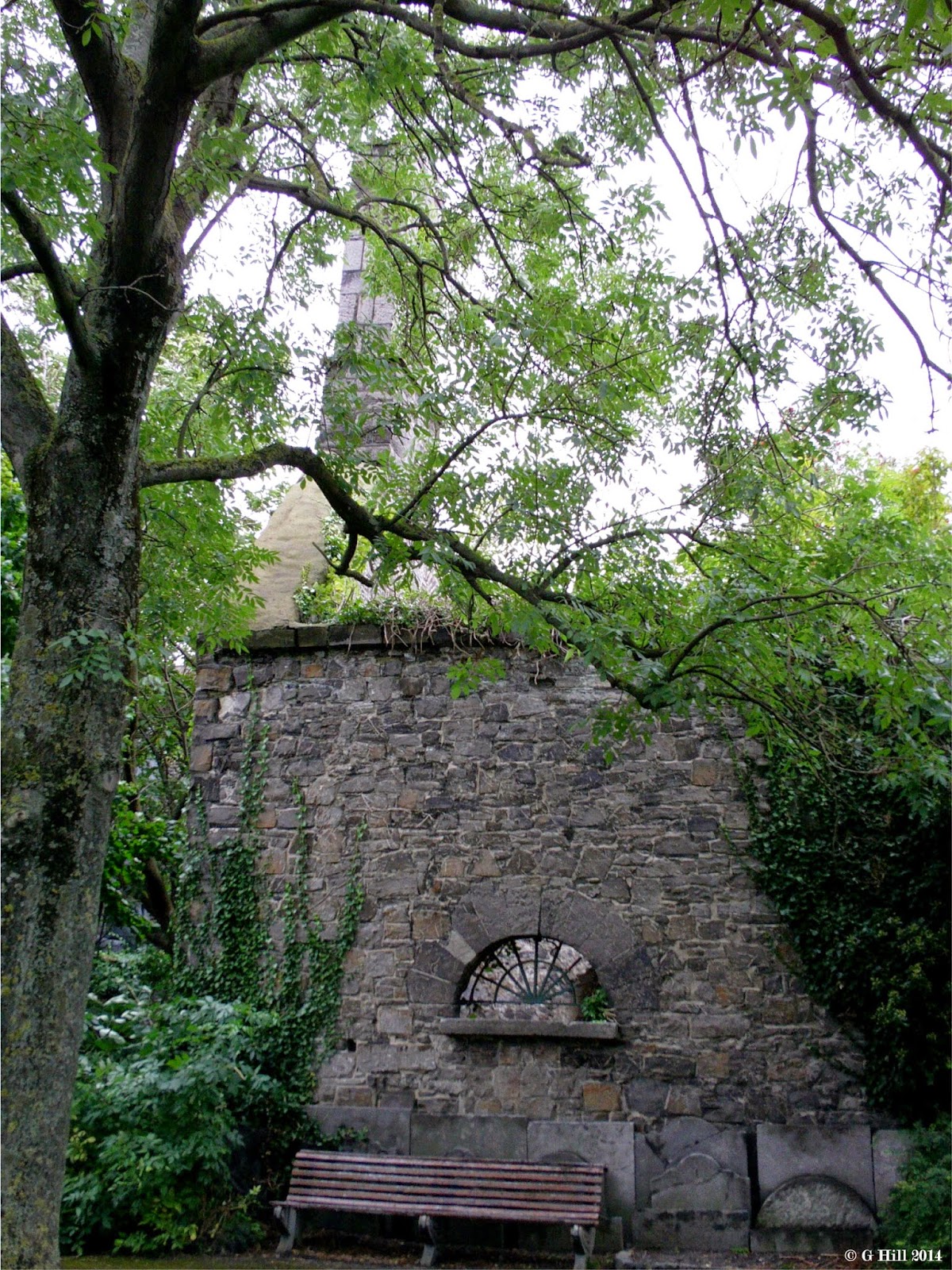 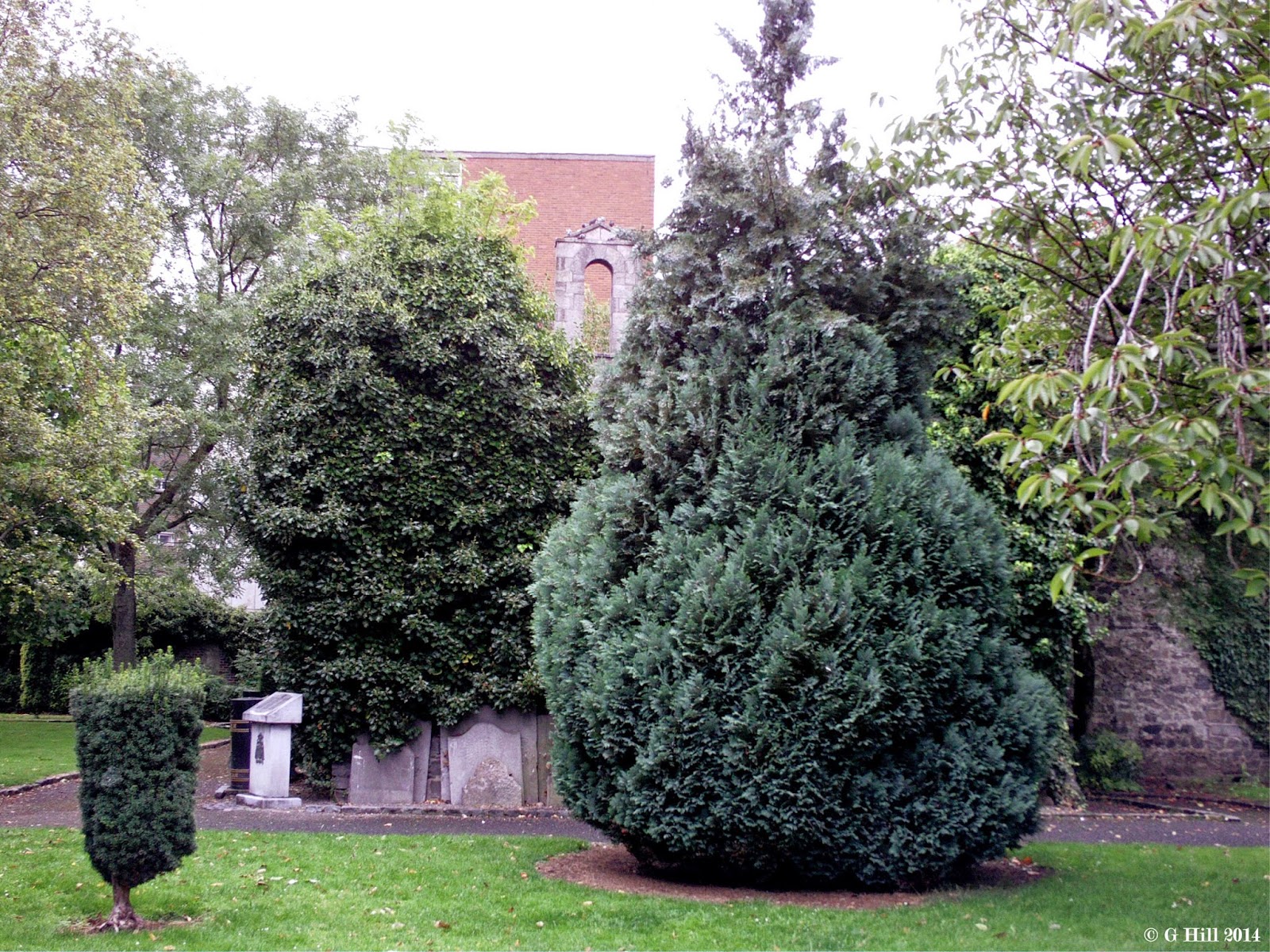 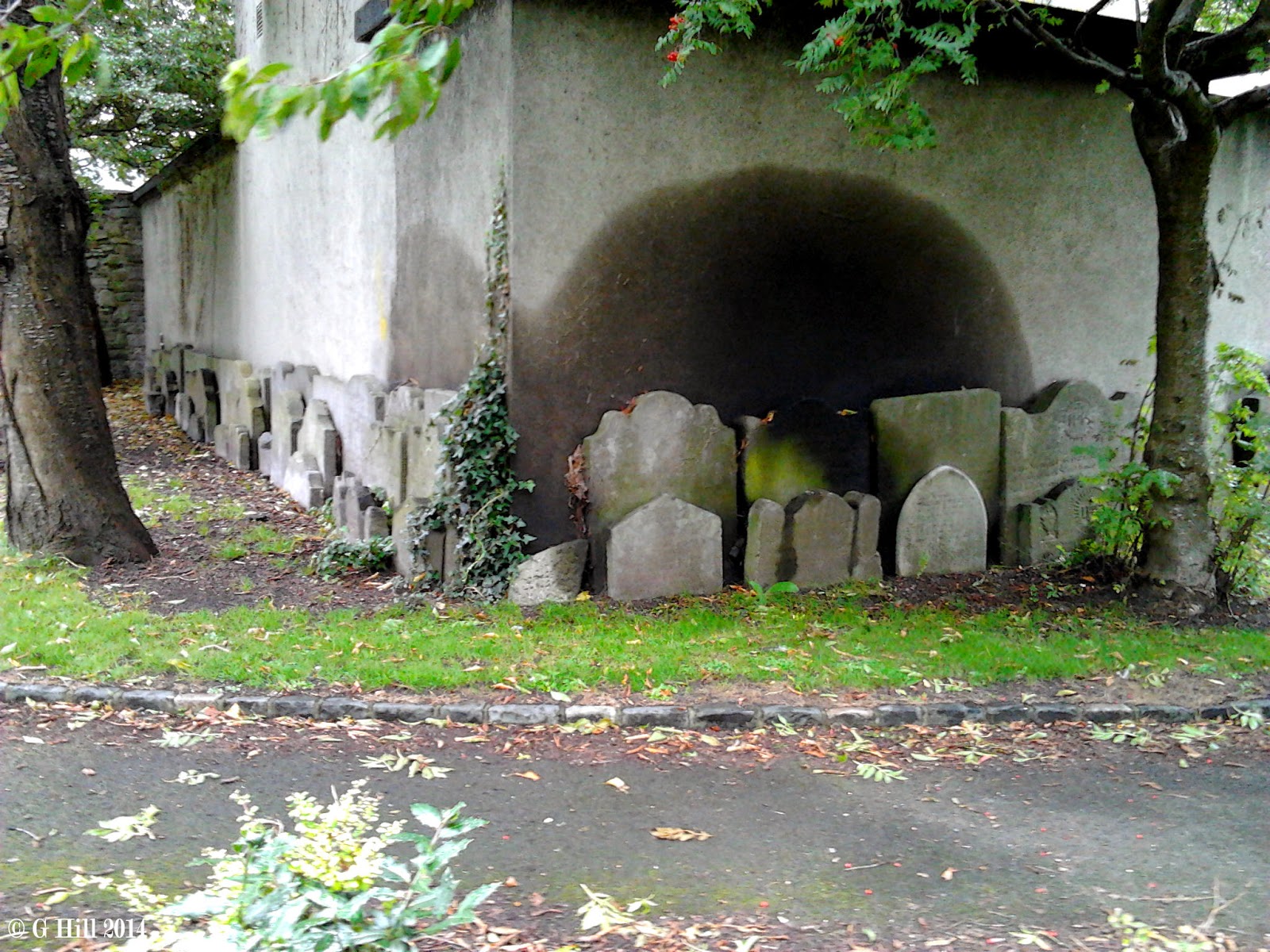 Above Image: Some of the removed headstones 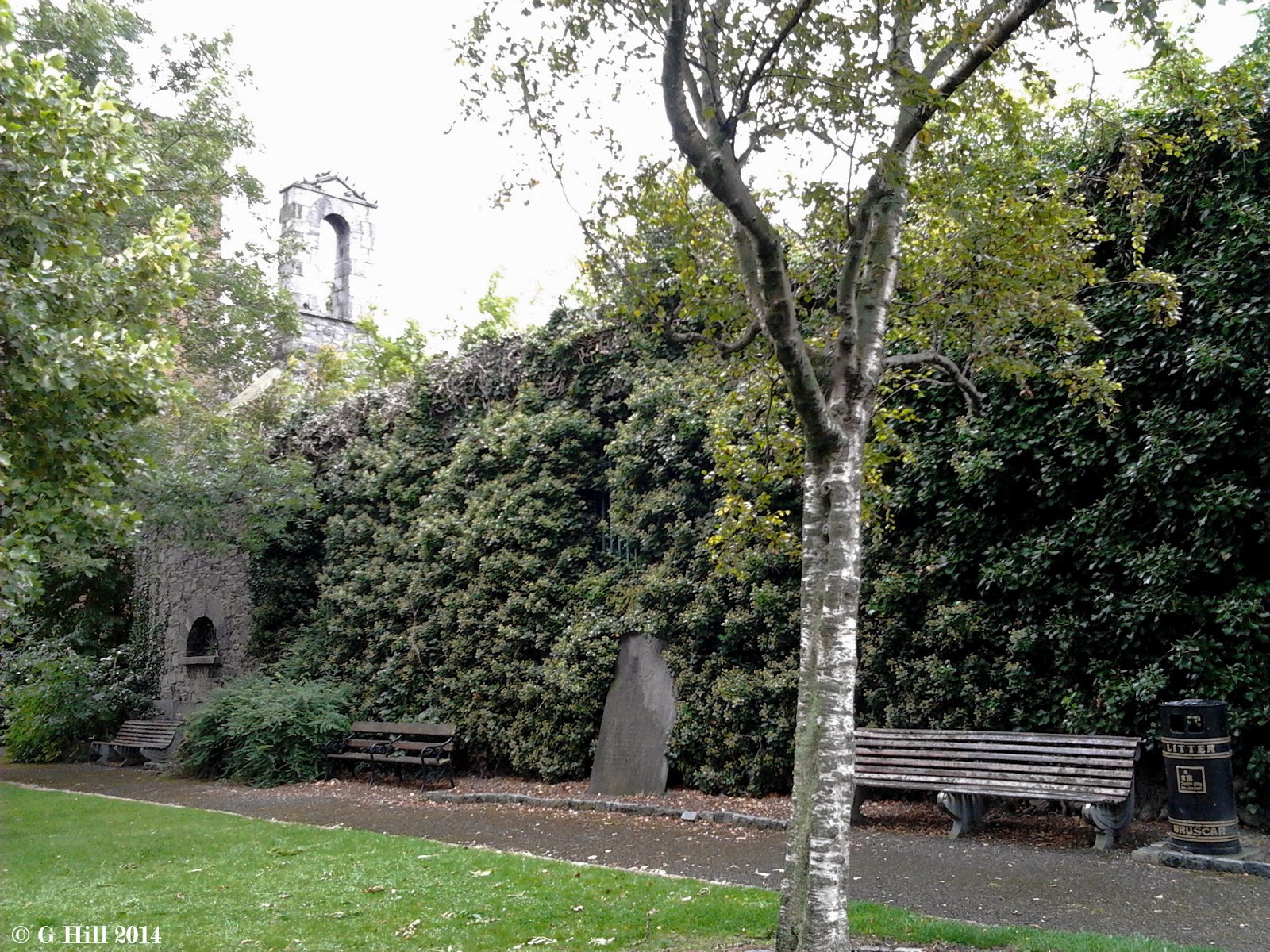 The first mention of a Church on this site just outside the then walls of Dublin was in the annals of 1226. No trace of this medieval church survives and the parish was administered after the reformation by the Church of Ireland. The present Church ruin dates to around 1750 and was built on the site of the old church. Quite a large structure for its type it was notable as the baptismal site for The Duke of Wellington who battled Napoleon at Waterloo. The church remained in use until 1912 when it was closed and its font removed and transported to St Nahi’s Church in Dundrum. In the 1960’s the site was being developed as a public park and excavations revealed some medieval coins and burials.
I wasn’t aware of the existence of this ruin until recently. It is closeted away down the narrow street called Camden Row and is surrounded by buildings and walls. An arched gateway provides access from the street and is open during daytime for the public to avail of the park. The Church lies at the North end of the enclosure. It feels a little encroached upon by the buildings but the park is maintained and is quite pleasant to walk in.
The ruins have been gated up so there is no access to the interior but you can see quite clearly through the bars all you need to see.  A tall belfry is situated on the West gable and is still in fairly  good condition.
One strange thing is that most of the gravestones have been removed from their sites and repositioned around the interior of the boundary walls. Whether this was to facilitate a more park like feel or not it seems a little bit careless to those interred there. This situation has led to stories of hauntings in the park by its interred community apparently aggrieved by the disturbance of their graves. History also notes that body snatching took place here a couple of hundred years ago and this coupled with the ghostly tales lends a more uneasy atmosphere to the site. The site is also infested with pigeons who lounge around on the gables of the Church.


To find the ruins, from the junction of Kevin Street Lower and Cuffe Street turn onto Wexford Street. About 80m along there is a right hand turn at Ryan’s pub. This is Camden Row. You will find the entrance gate to the ruins about 100m up this road on your right. Disc parking is available along this road.