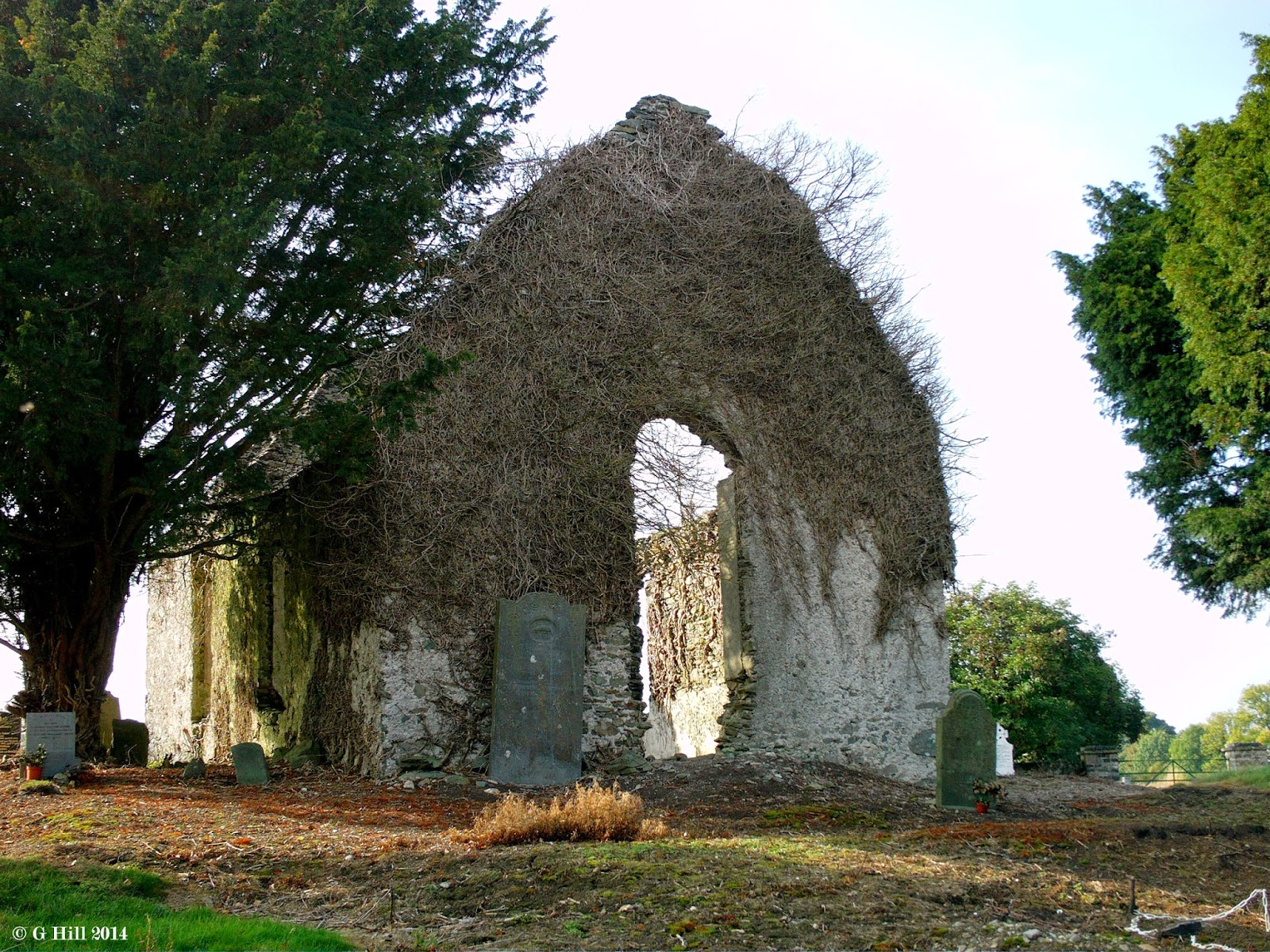 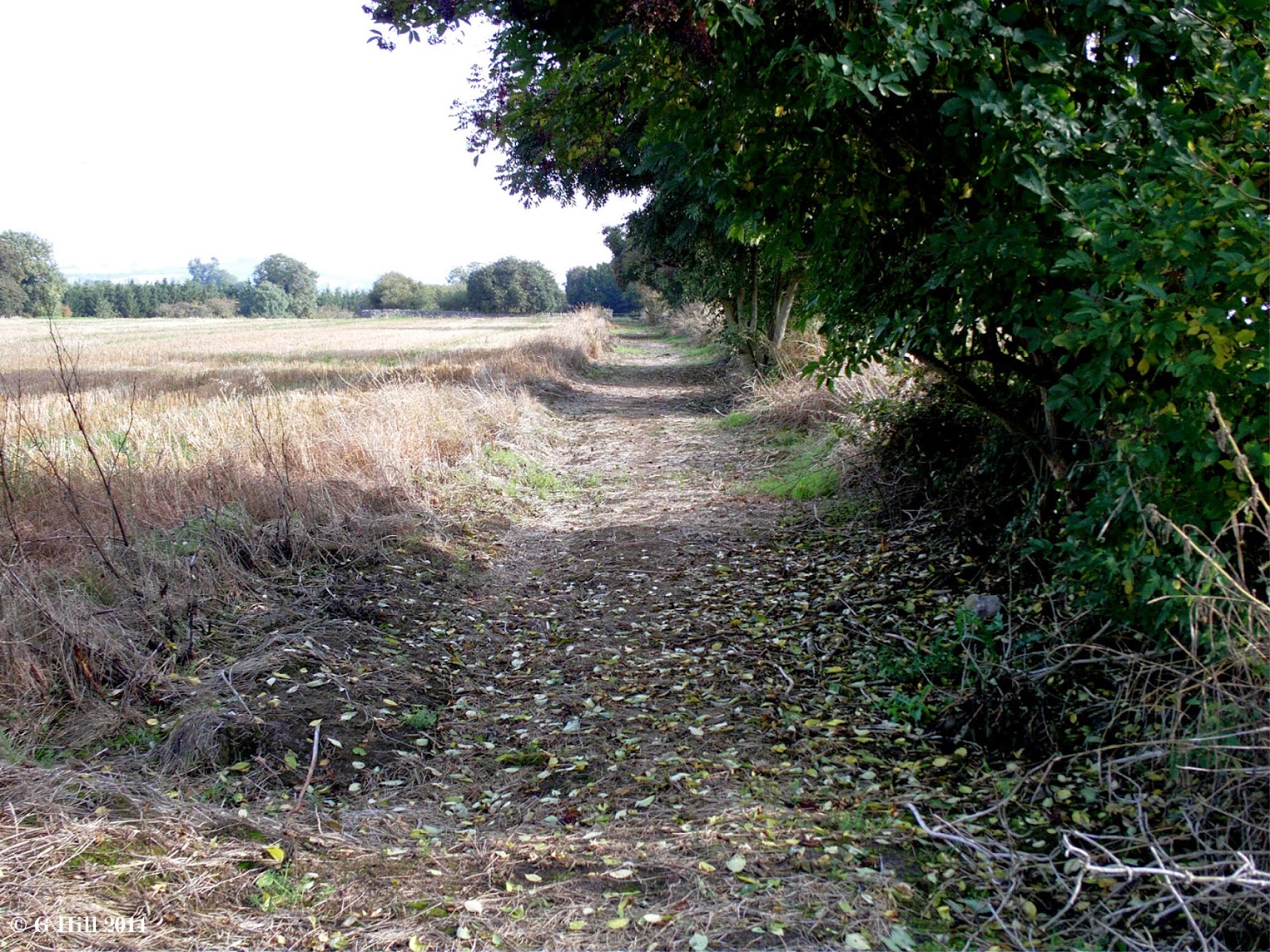 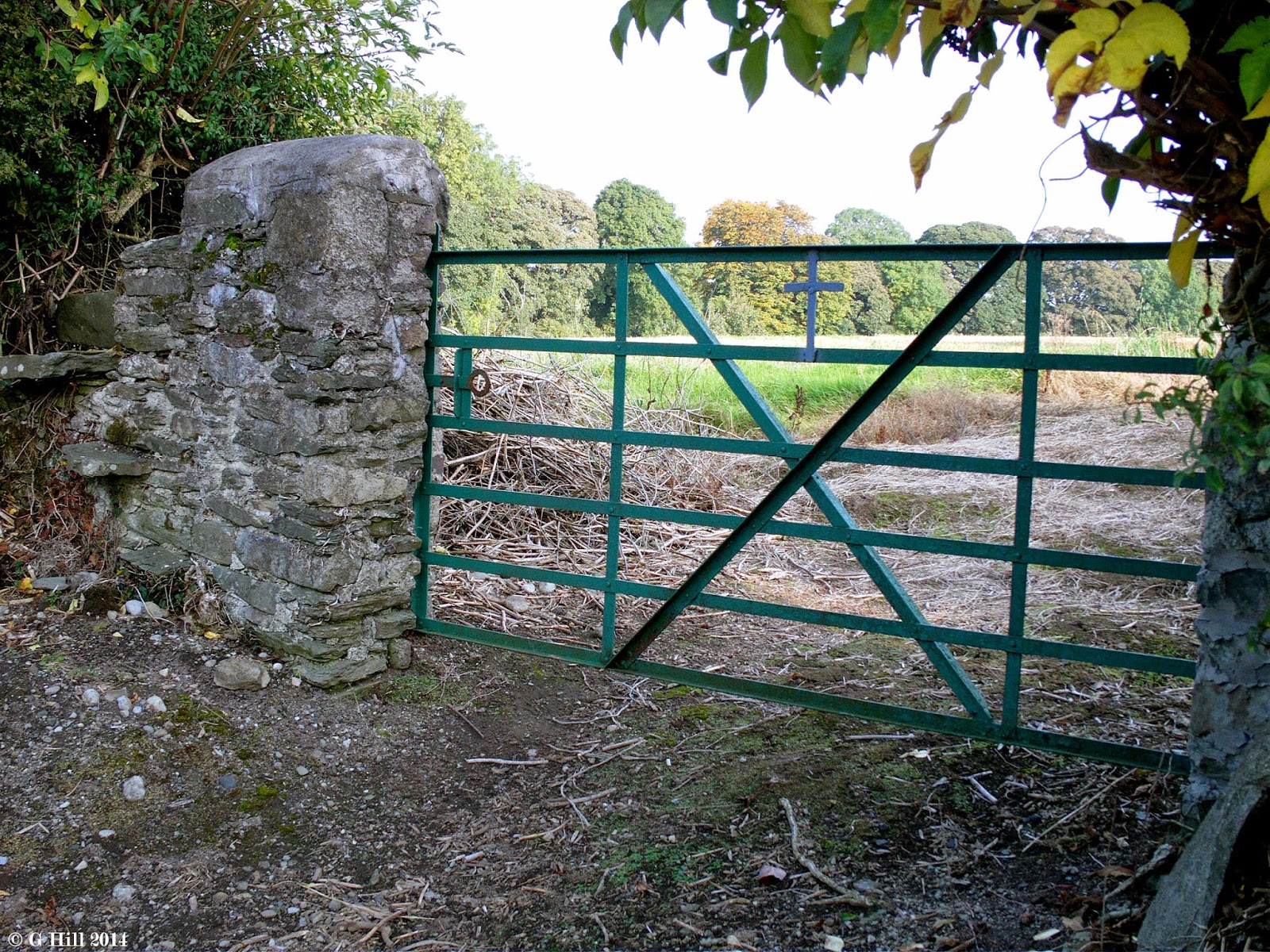 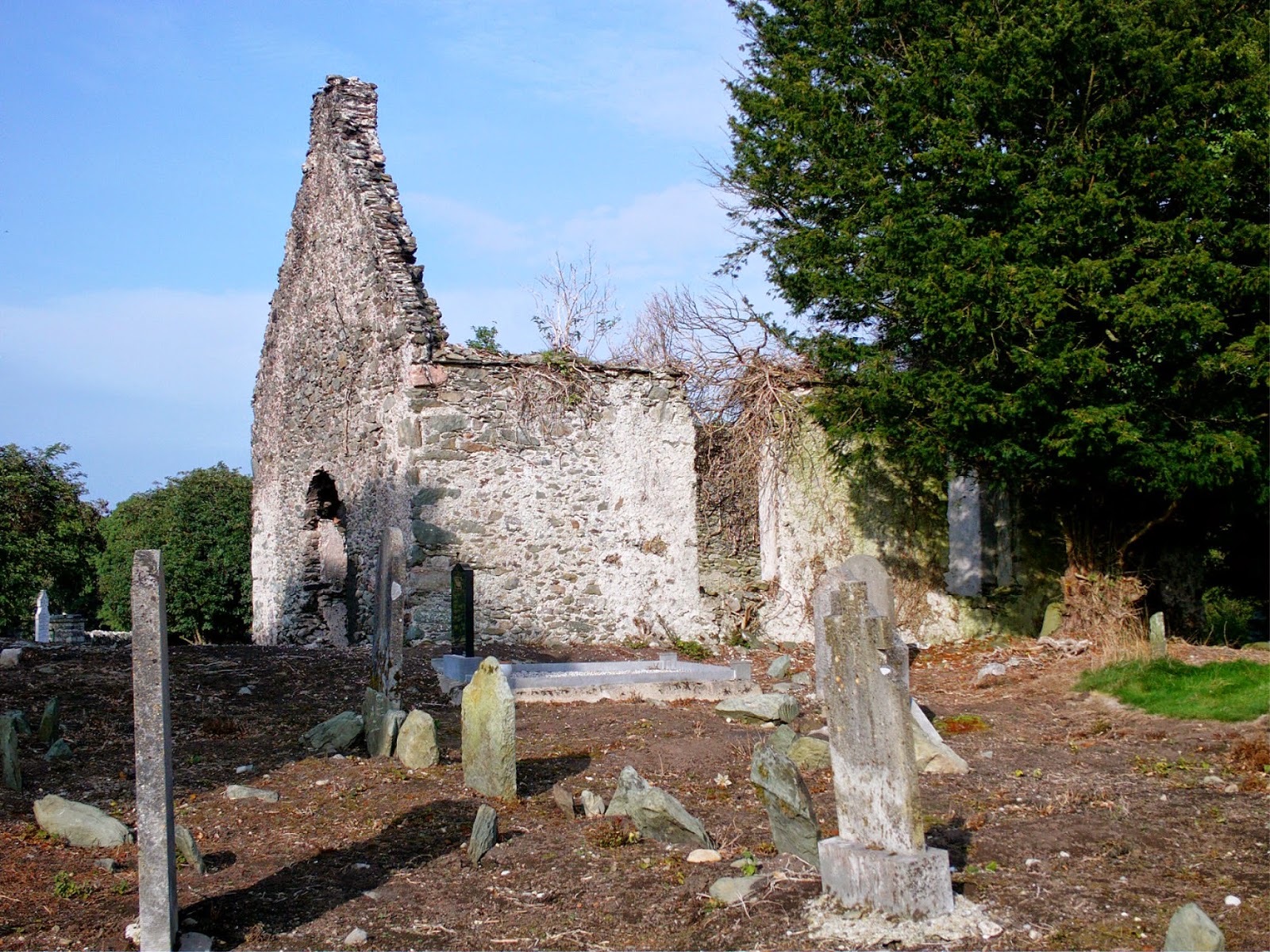 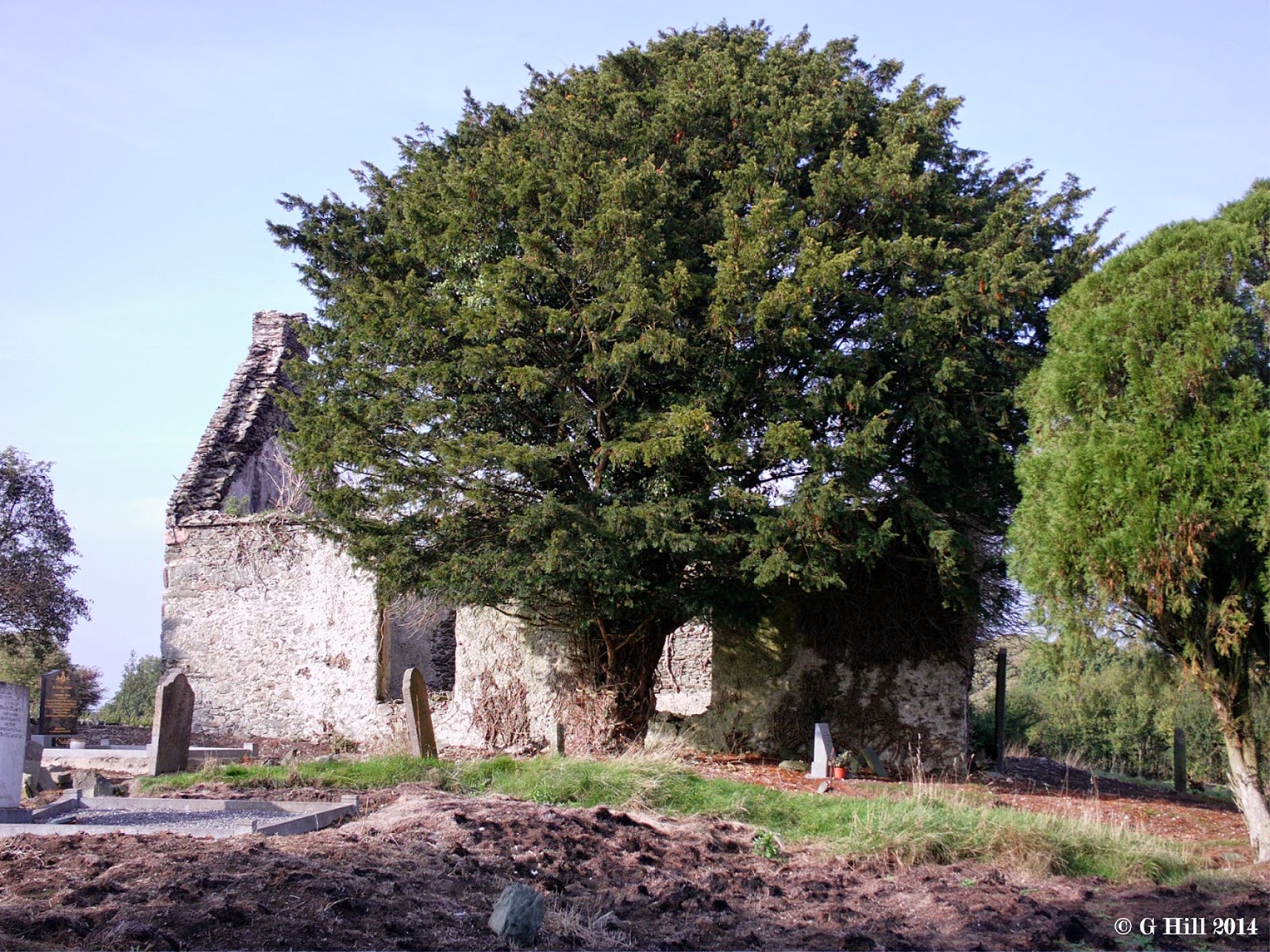 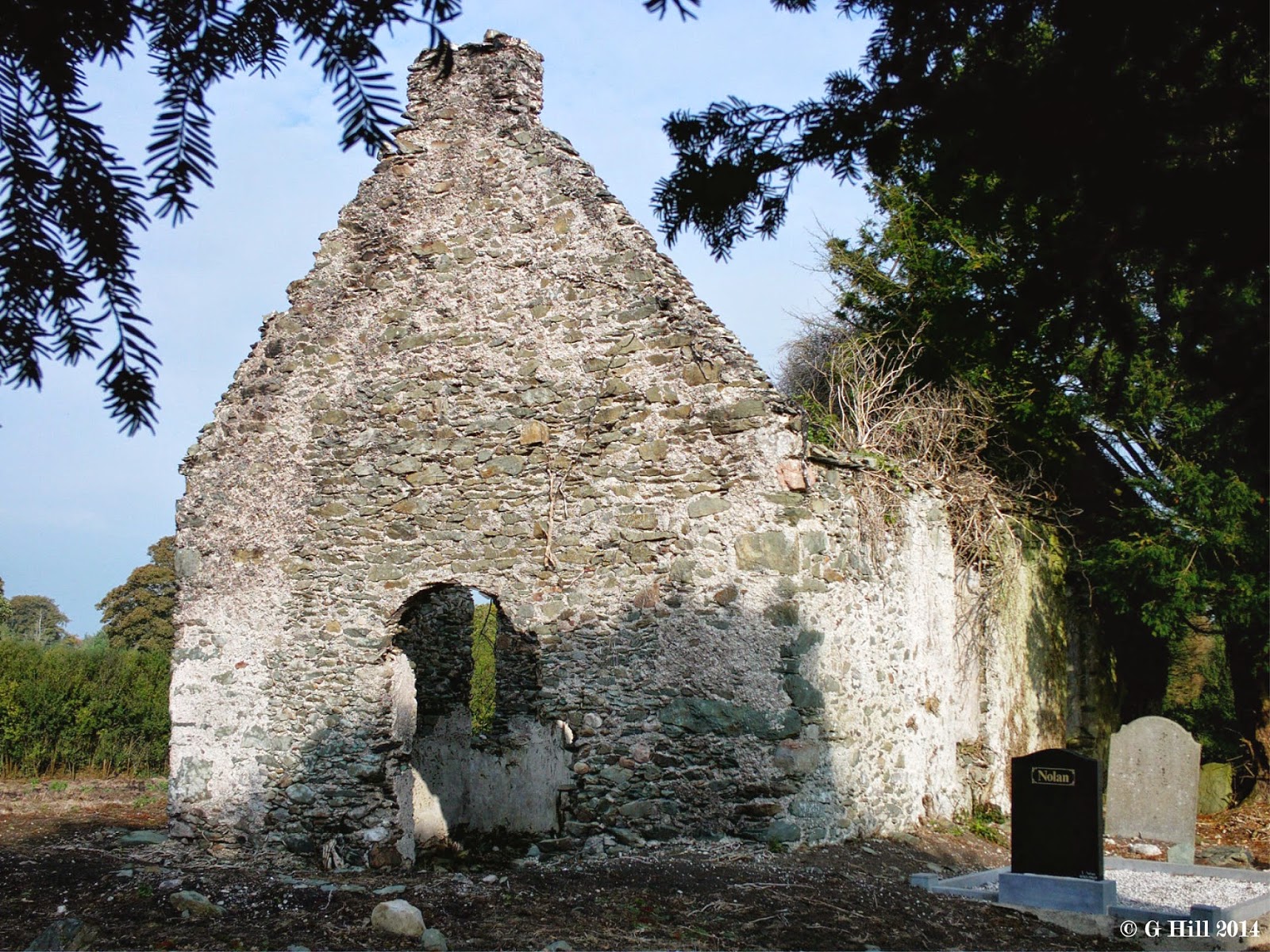 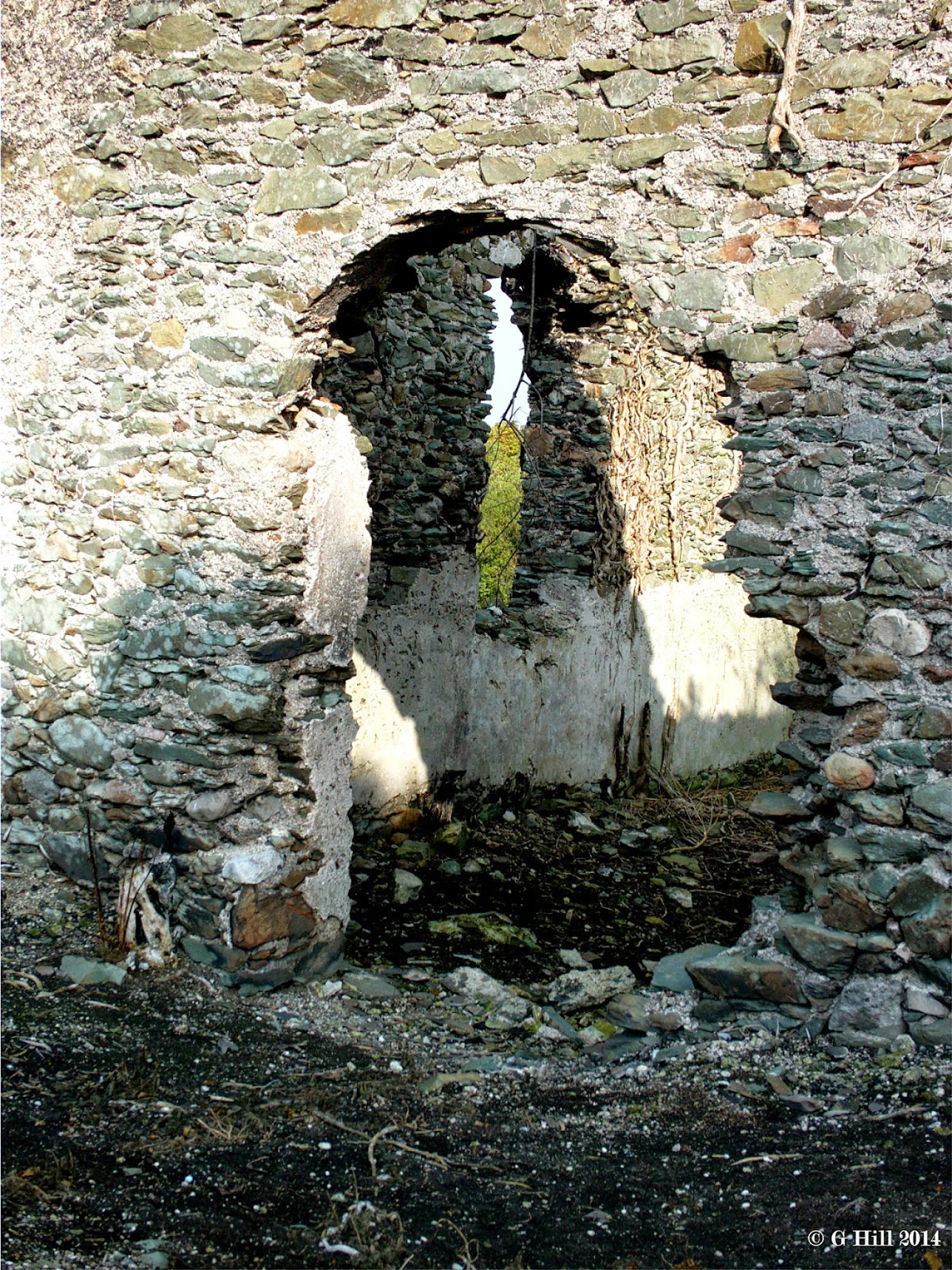 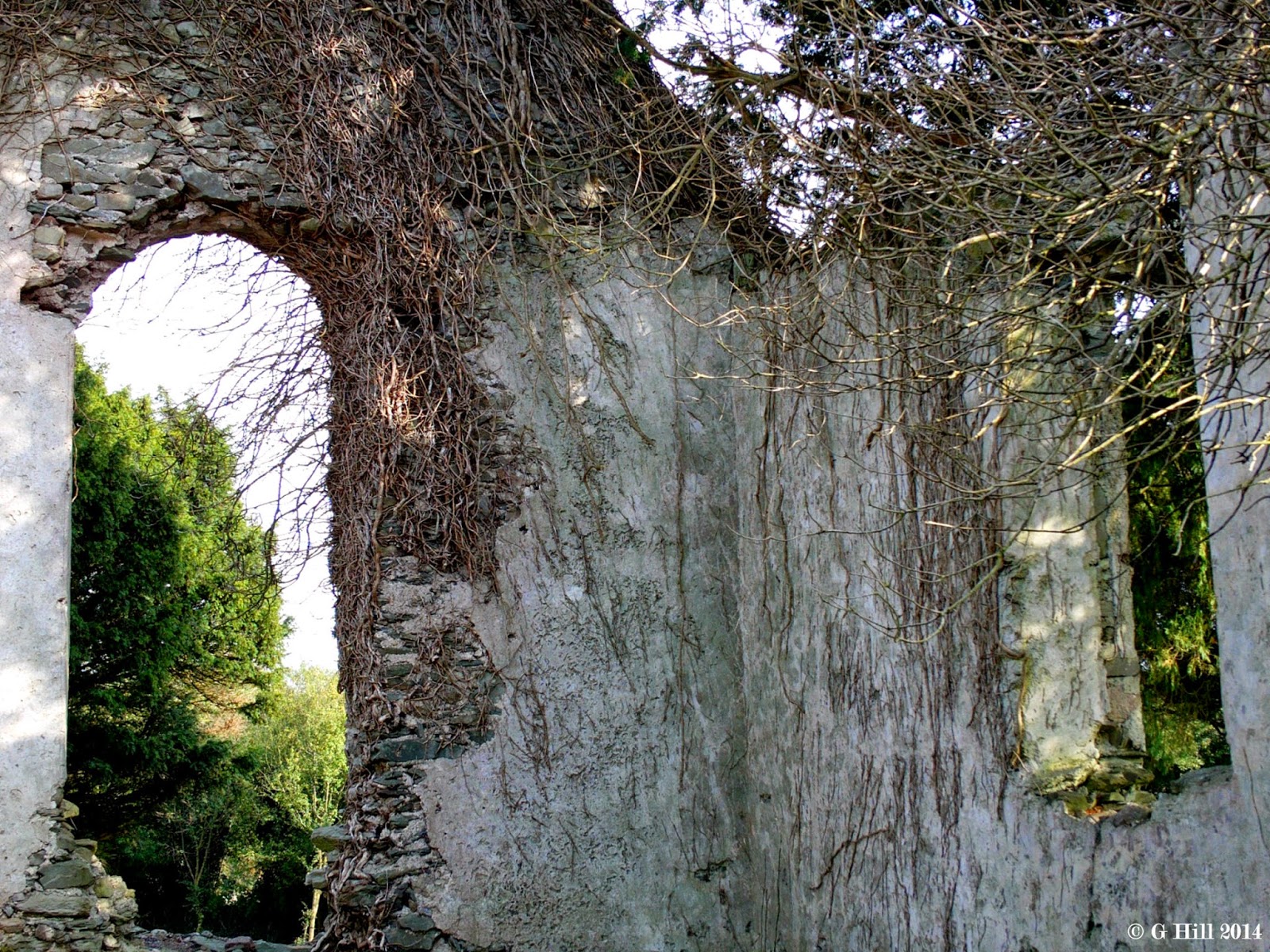 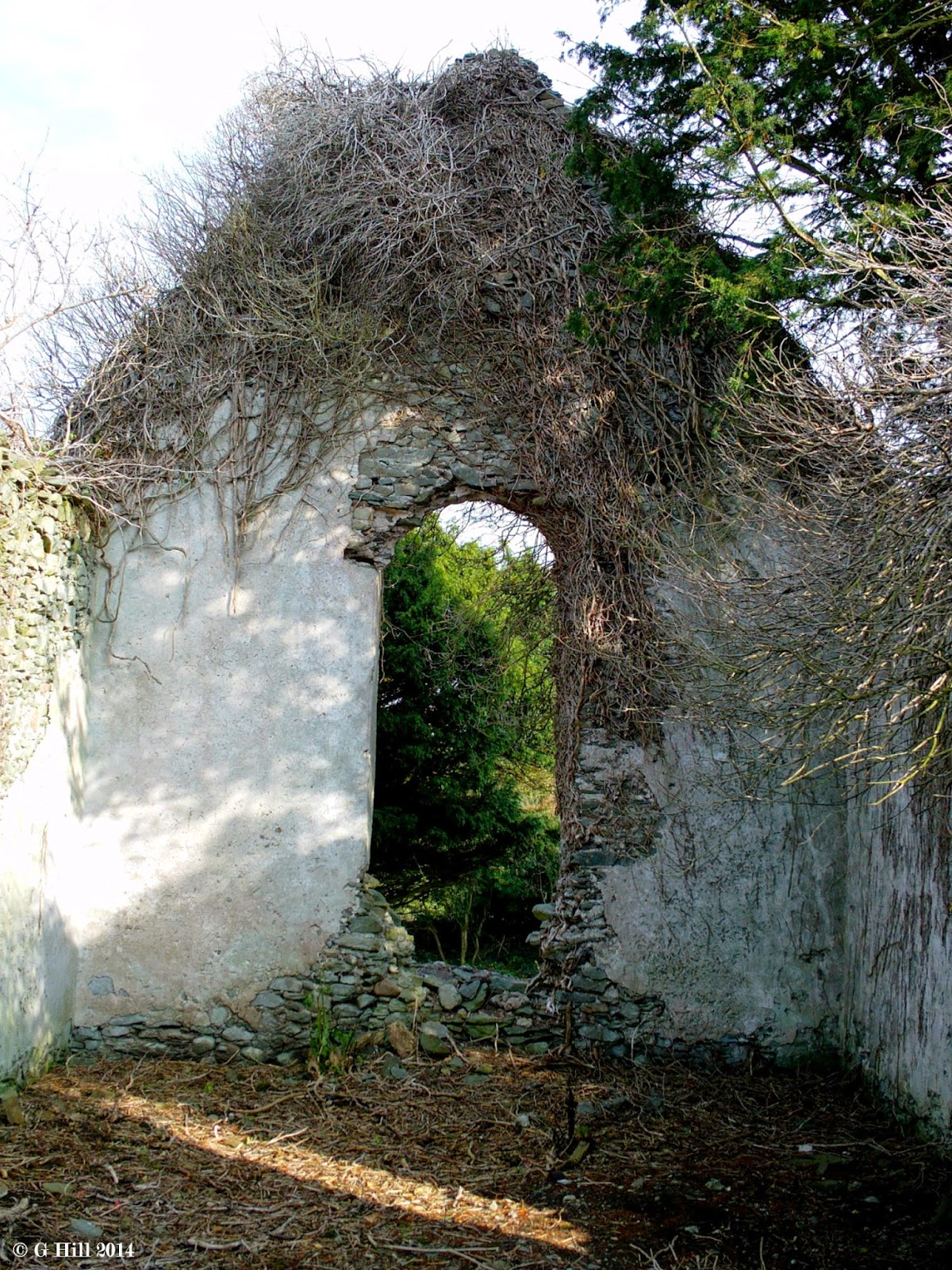 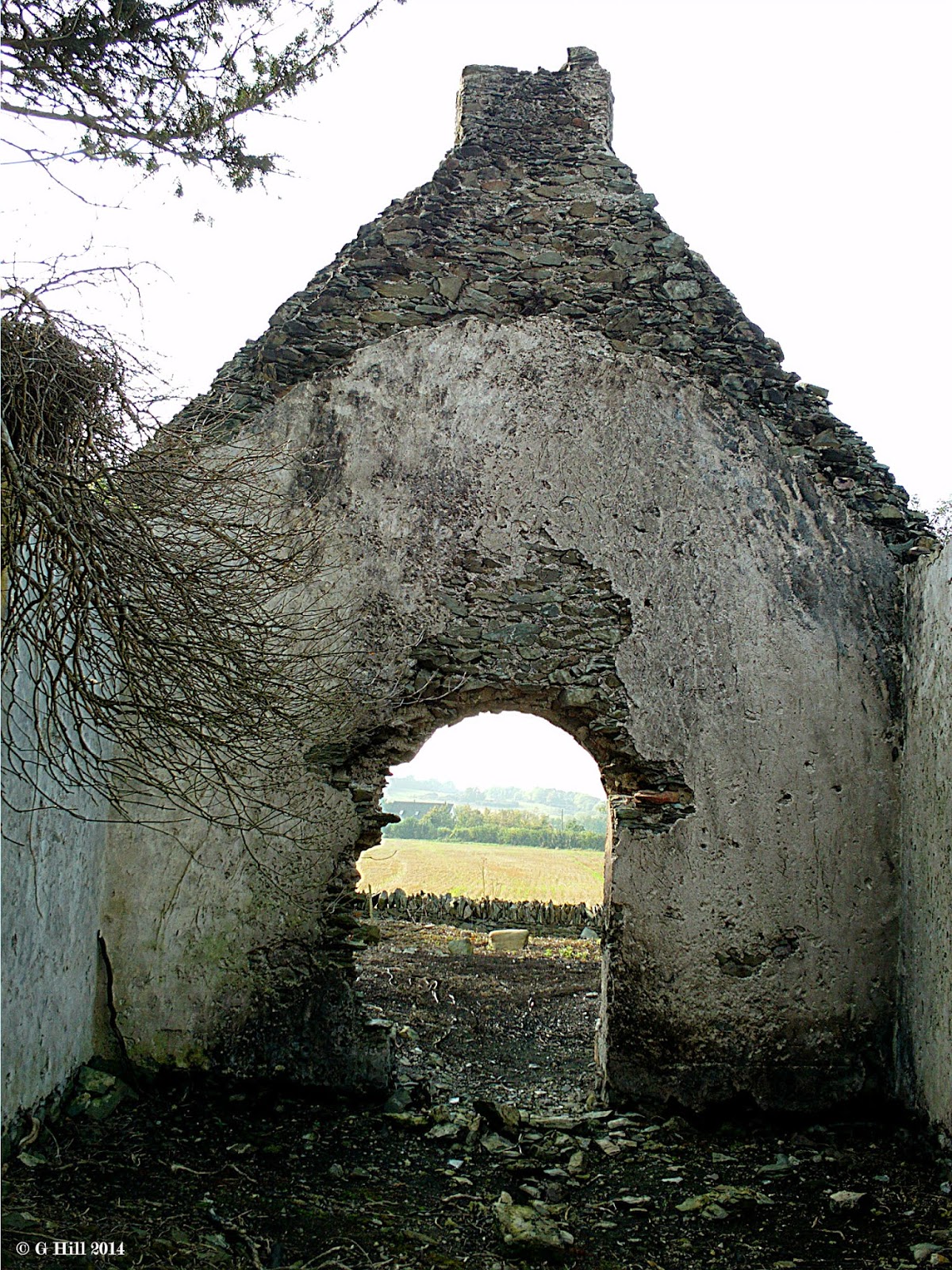 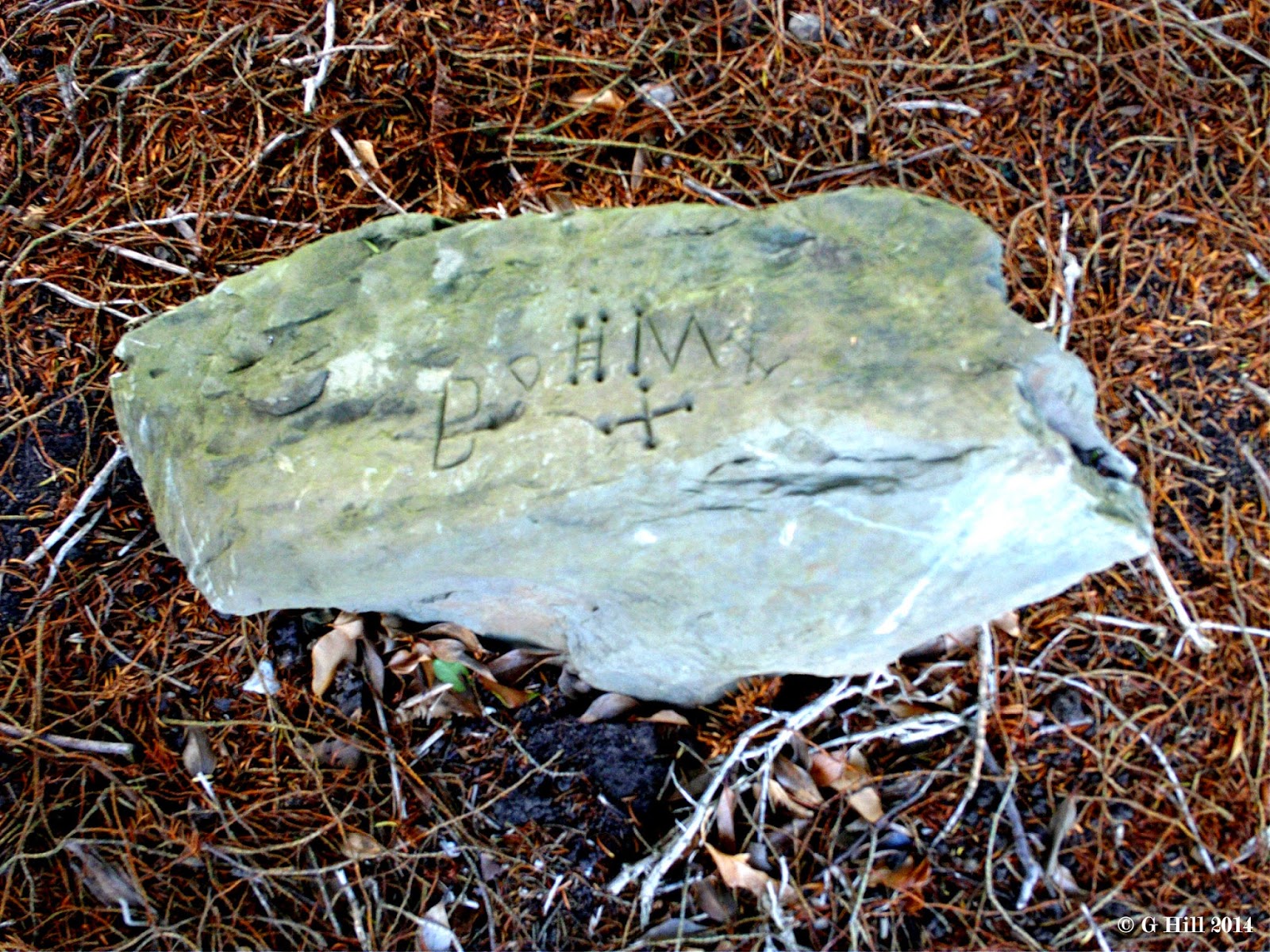 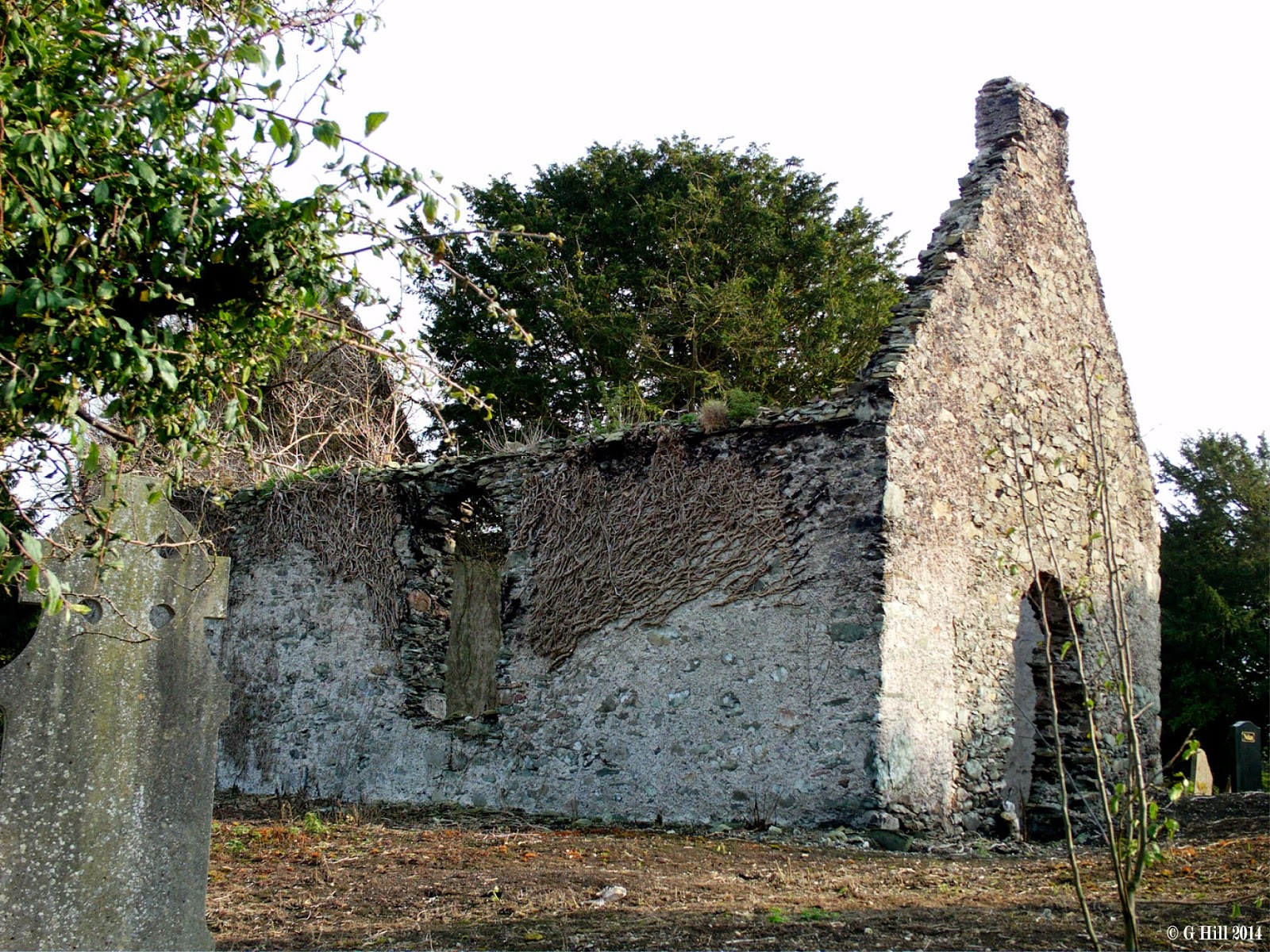 The Townland of Davidstown lies close to the village of Calverstown in Co Kildare.
The ruins of the old Church dating to the early 19th century are located in a crop field well isolated from the road. The Church must not have had a long term of use as it is stated as being in ruins on the ordnance survey map of 1897-1913.
The ruins are accessed by way of an iron gate on the roadside which also has an adjacent stile. A pleasant walk along a track of about 300 feet through the field brings you to a walled enclosure also sporting a gate and stile.
The Church a simple rectangular structure with remains of a bell cote lies in a very ruinous state now. All four walls are extant but Vegetation has begun to cling to them and although this graveyard is still open it looks as if the church ruins which are not maintained in any way will eventually succumb to the overgrowth crumbling or disappearing like many of its ilk into obscurity.
There is a doorway is in the West wall and windows set in the East gable where presumably the altar stood and in the North and South walls.
Isolated from the road the Church is a lonely sentinel to the various grave markers that surround it.  One curious stone lies to the south west of the church and has unusual lettering carved on it. Maybe somebody reading can decipher it.
There is an eerie feel to this place maybe more so a kind of loneliness. The ruins stand in the centre of the enclosure and no longer bear any relatively distinguishing features. A simple church that fell out of use in harder times than these.
To find the ruins take the M7 Dublin to Limerick motorway and at junction 11 take the exit for the M9. At junction 2 take the exit for Kilcullen and at the top of the exit ramp turn right and follow the sign pointing to the R448 for Castledermot. Drive for approx. 3.5KM until you see a turn on the left for the L8008 for Calverstown. Take this left hand turn and drive until you have passed through Calverstown Village. Once through the Village and 400m on you will pass over a small stream and pass by a large five windowed house on your right with a rounded arch door. 100m past this on the left you will spot an iron field gate with a cross inserted in the ironwork. This is the entry point. You can park safely enough just past the gate if you tuck the car in against the hedgerow.
Posted by Castlehunter at 20:08