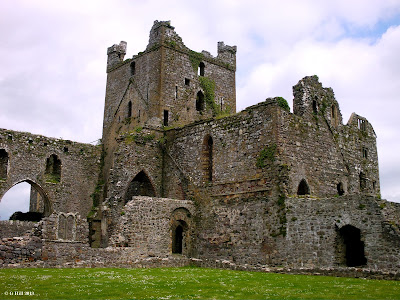 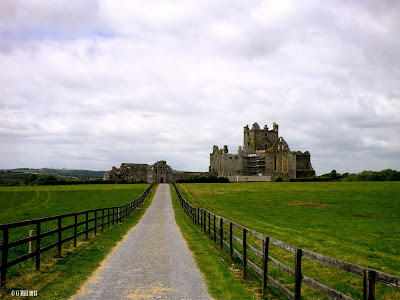 Above Image: The pathway to the Abbey 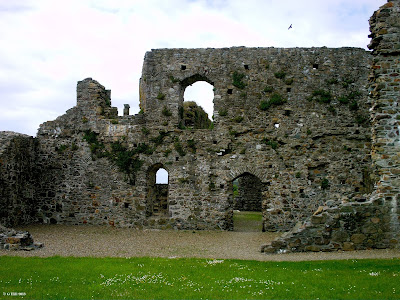 Above Image: The Refectory 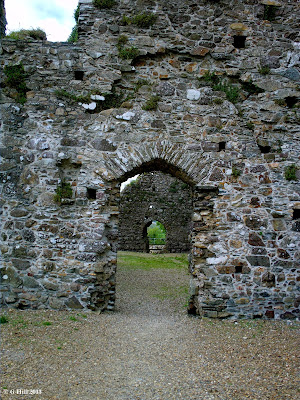 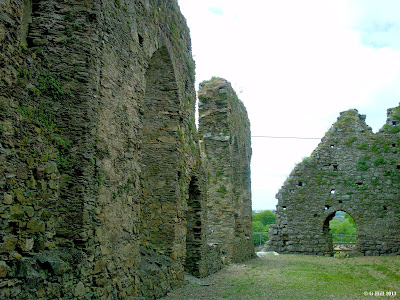 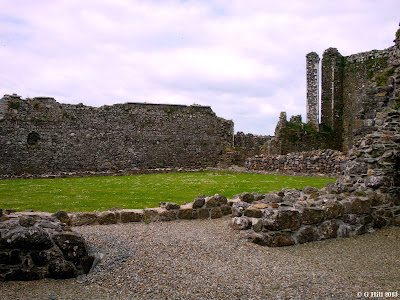 Above & Below Images: The Cloister 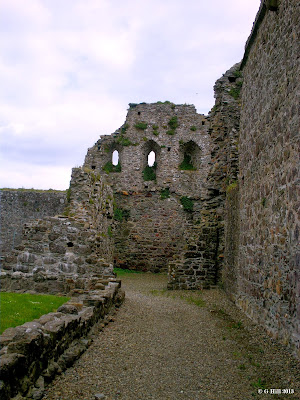 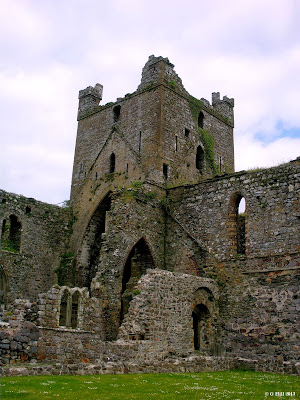 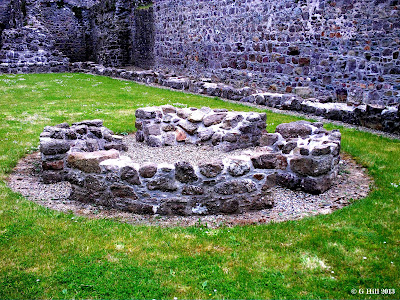 Above image: Ruined outdoor seating or a Well? 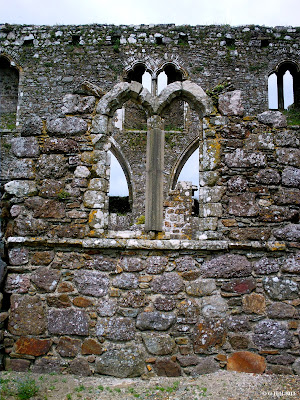 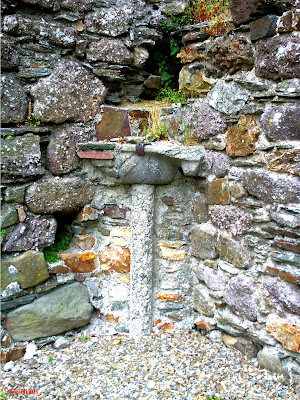 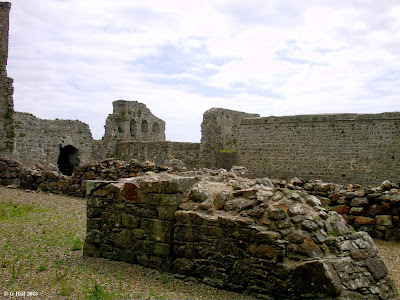 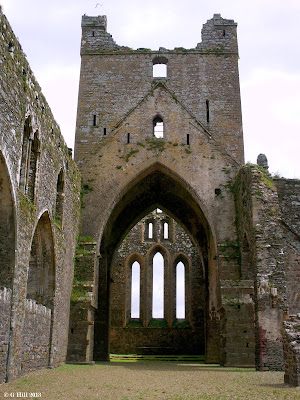 Above Image: The Nave 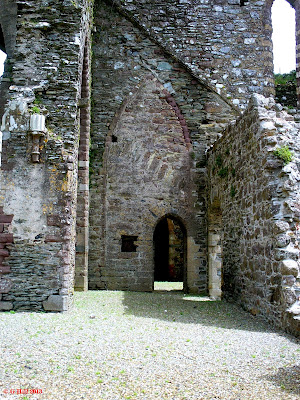 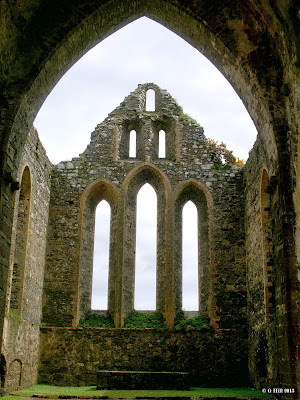 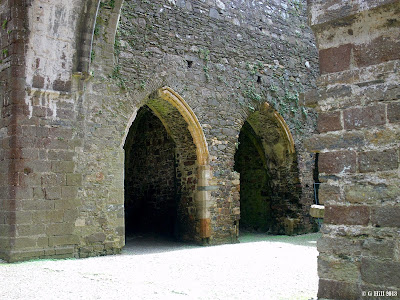 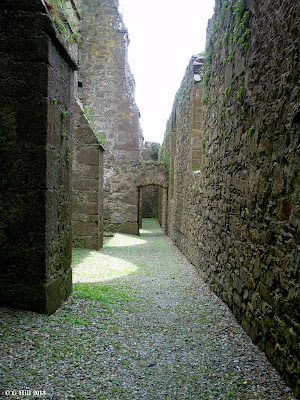 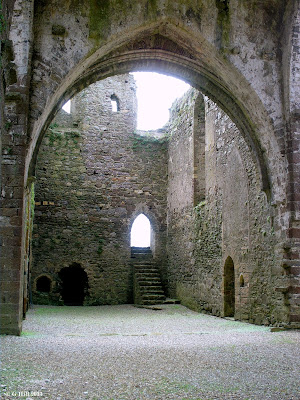 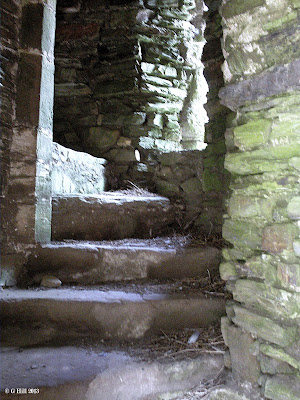 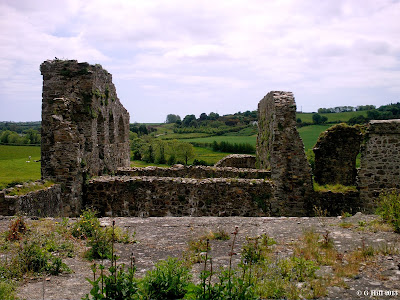 Above Image: Ruins of Etchingham's residence viewed
from the night stairs 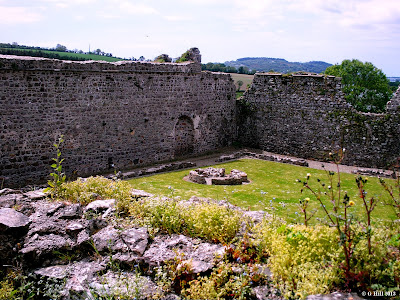 Above Image: The Cloister viewed from the night stairs 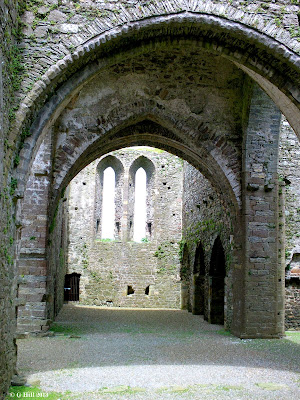 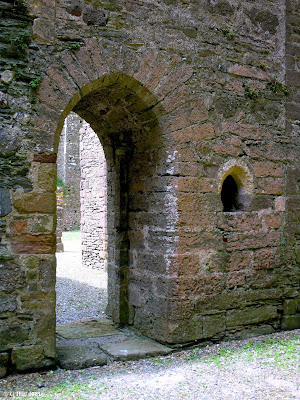 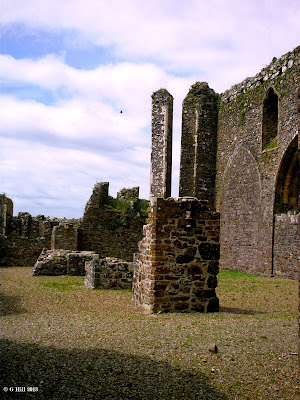 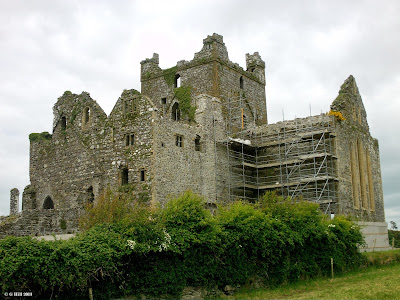 Above Image: The renovation work


Cistercian monasteries are generally massive structures and Dunbrody Abbey is no exception. It stands huge and hulking against the Wexford countryside surrounded on all sides by pastoral land.
The Abbey was commissioned by "Strongbow" (Richard De Clare) in 1170 and was constructed by Harvey De Montmorency. It was completed by 1220. This comprised of the cruciform Church only while the huge tower was added later in the 15th century. The length of the Church measures 190 feet making it among the longest in the country.
The Abbey thrived for centuries until inevitably the dissolution of Abbeys put paid to the Cistercian tenure. It was dissolved in 1536, the monks evicted and anything of worth removed including the lead on the roof.
In 1545 the lands were passed to Sir Osbourne Etchingham who converted part of the Abbey into a residence but over subsequent years the buildings suffered neglect and eventually in 1852 the South wall collapsed causing major damage. What was left of the Abbey soon fell into ruin.
This has to be one of the most dramatic ruins we have visited. They lie adjacent to the Dunbrody visitor centre and Castle (See earlier post here)  and a key for access can be obtained from the reception for a nominal charge. A pathway measuring approx. 150m leads you directly from the road up to the Abbey and there is a real excitement to opening the great gates and being the only visitors there. To be honest I think most visitors to the centre come to see the great Yew Tree maze and play miniature golf rather than make the walk to the ruins. This was August and high season and we spent a good hour there alone. Not that I'm complaining as it gives you time to absorb the atmosphere uninterrupted.
Once through the gate you are led directly onto the cloisters under the ruins of what was one the residential area converted by Etchingham. The cloister retains the large green area but the pillared surrounds are now gone. From this vantage point the great tower looms above you and is really a stunning piece of architecture.
In the green area is a circle of stone divided by four gaps. This might have been the top of a well but most likely it may have been outdoor seating for the reflective monks.
there are a number of chambers dotted along the east side of the cloister which are locked as they house some carved stones salvaged from the Abbey.
The great Nave runs in under the vaulted underbelly of the tower and leads to the Chancel in which a stone altar is situated directly beneath the massive East window. There is some restoration work in progress on the the Abbey by the current owners and the OPW but it appears to have been halted for the moment. Any access to the tower and the small spiral stairs we discovered have been locked for now which is a pity as the views above would be magnificent. On the South transept however there is a set of stone steps known as the Night Stairs which lead up to a gated doorway again locked but from here you are afforded views of the cloister from above and part of the ruins of Etchingham's residence. This at the moment is the highest point you can achieve.
On the opposite side of the cloister from the Nave are the remains of the Refectory and Kitchen again adding to the large expanse of this Abbey. All in all there is a lot to see plenty of nooks and crannies to explore and the architecture in places is remarkable evoking a great sense of history.
To find the Abbey take the N25 out of New Ross Eastwards towards Wexford Town. Just after you have passed along the quayside in New Ross the road veers left. Take the next right hand turn onto the junction with the R733. Drive for approx. 4Km until you reach a right hand turn with a sign pointing to Arthurstown. This is a continuation of the R733. Drive for another 6KM until you see another right hand turn for Arthurstown with a large stone church (St. James's) on your right. Turn right and drive 1.5KM and you will see the huge Dunbrody Abbey on your right. Adjacent to this is a car park and visitor centre on your left. Ample parking is available. The centre is only open mid May to mid September. If visiting go as early as possible for a quieter visit. Outside of the seasonal opening you will be able to walk up to the Abbey but not access the interior.
Posted by Castlehunter at 12:45