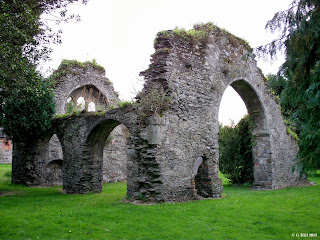 Above Image: The South transept 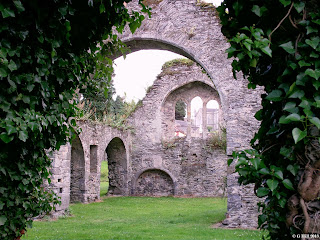 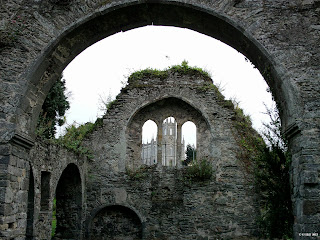 Above Image: St Patrick's Church visible through the window 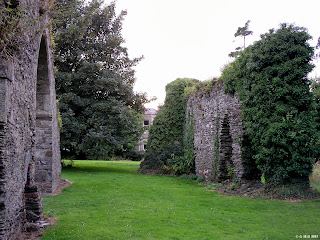 Above Image: The site of the nave with only north wall
remaining (right) 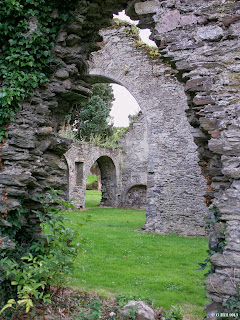 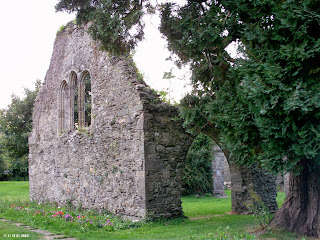 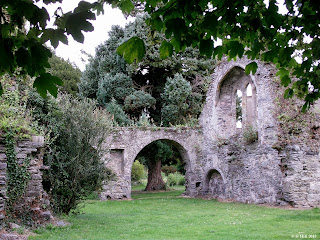 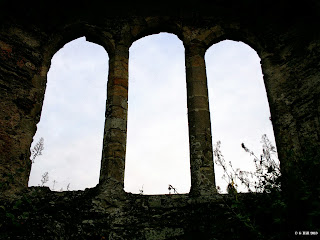 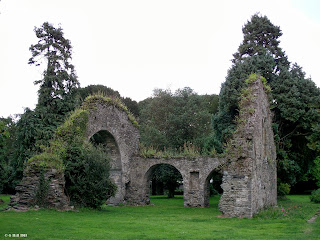 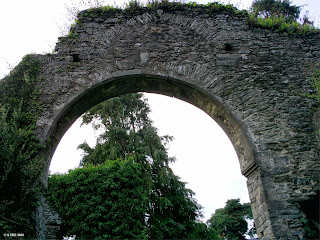 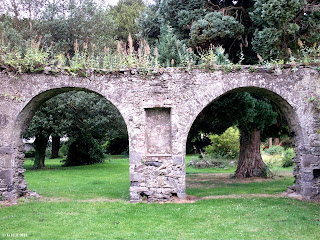 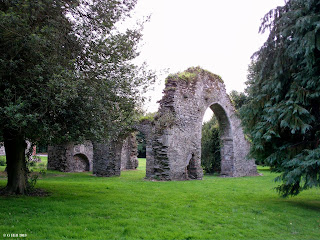 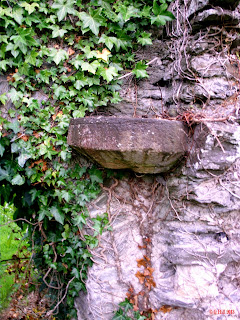 Above Image: A font? 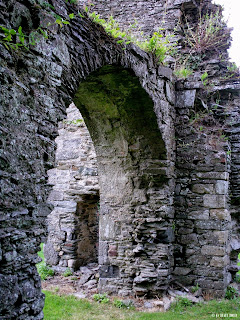 Founded in the 13th century for the Franciscans and in close proximity to the Black Castle (See earlier post here) this Abbey may have been constructed by the Norman Fitzgeralds who were a prominent family in the area. In the mid 1500's during the dissolution of Abbeys it was seized and utilised as both an armoury and a courthouse. This resulted in the fine buildings being neglected and left somewhat dilapidated. In 1615 a visiting Franciscan noted that's its misuse had caused parts of the structure to fall into ruin. By the late 1700's it had degenerated into roughly what remains today. The ruins became clad with ivy and were only cleared of it in the mid 1950's, the grounds landscaped as part of the present parochial house.
The presence of these ruins is obstructed from view by a high wall surrounding the parochial house in Wicklow Town. The only giveaway that they might exist is the fact that the street outside is called Abbey Street. We had been informed that a gate giving access to the grounds was open to the public so we decided to pay a visit on a n August evening. The gate is located opposite the old Forge pub and within this gate lies a utility building and some picnic tables. A green area led us across to the ruins. The Abbey originally would have been in the shape of a crucifix with the long nave crossed by transepts. While there is not a great deal of the Abbey left what does remain are a series of arches that once formed part of the South transept. All walls in this transept still stand except for the West.
There is a fine window in the Southern wall which from within looks out now upon the elevated St Patrick's Church across the road. The Eastern wall contains two low arches and the North wall a fine high arch that would have led into the nave. All that remains unfortunately of the nave is  a section of the North wall with a small doorway. This part appears to be gathering ivy again. Otherwise the ruins appear to be well maintained and although skeletal in appearance they are pleasing to the eye. The grounds also contain a small babbling stream and some palm trees which lend some ambiance.
When we went to  leave we found the entry gate locked with large electric gates! It was after 8pm so maybe they shut them for the night. Luckily enough we managed to find our way around to the other side of the parochial house and spotted a small garden gate in the wall which was thankfully unlocked.
To find the ruins take the junction 16 exit of the N11 Dublin to Wexford road and follow the signs for Rathnew. In the village you will reach a roundabout. Take a left onto the R750 and drive until you reach Wicklow Town. You will pass the Grand Hotel on your right and then take the next left turn into the public car park. Walk back out to the road and turn right. Walk a short distance until you see the Old Forge Pub across the road. The entry to the parochial grounds is directly opposite on your side of the road
Posted by Castlehunter at 20:26