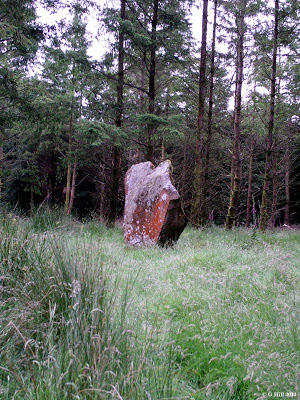 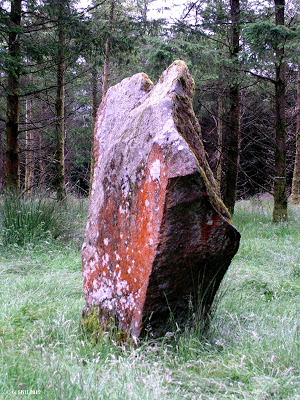 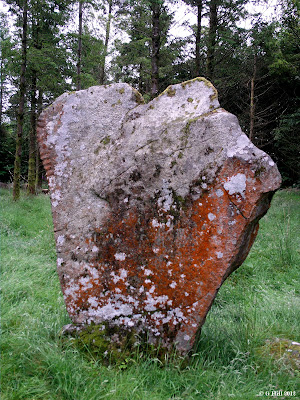 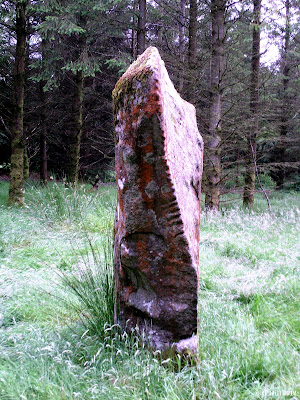 Above Image: The Ogham writing 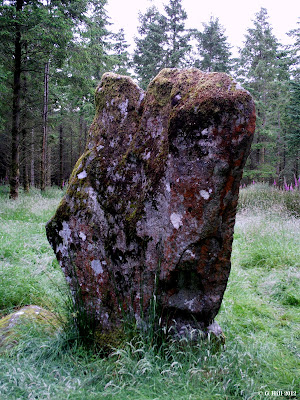 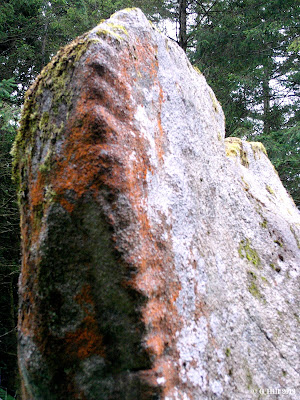 Above Image: Close up of some Ogham writing 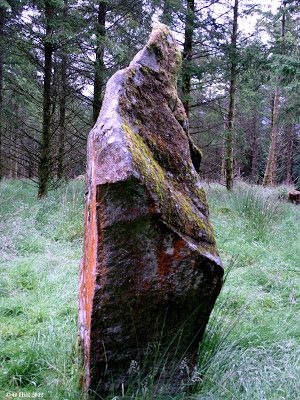 This unusual monument has been called in its time either a Long stone, a Standing stone or an Ogham stone. It stands in a forest near the Glen of Imaal and until recently was completely immersed in the woods. The general area has since been cleared making it much easier to locate.
It has been dated to between 400-550AD and contains Ogham writing on the corner facing North Eastwards Ogham is the oldest form of writing to be found in Ireland and the writing on this stone appears to spell "MAQI NILI" translated loosely to "Of the son of Neill/Niall"
The granite stone stands approx. 8 feet in height with a base measuring 1 metre. It increases in width from the bottom up to 2 metres at the top.
We were a little wary visiting this site as we were informed that the stone was located on the border of the Army firing range in the Glen of Imaal. These areas are prohibited to the general public for obvious reasons, but according to the ordnance survey map of the area it is positioned just outside the zone, so we took a drive out to have a look.
Once out of Donard we had to follow a long narrow forest road which was bumpy in places until we reached a form of crossroads. There were warning signs everywhere and on the road ahead a manned sentry box. I parked the car to the side of the road and I asked the soldier if it was OK to take a walk up the forest road to the left. He said this was fine but not to wander too far off the track into the woods. About 40 metres past the barrier on this track we spotted the stone on our right. It was about 10 to 15 metres off the track but seemed close enough to be safe.
This is an amazing looking stone, so unusual in shape (almost an elongated heart) and standing quite firmly straight for its age. Its height also makes it quite imposing. The small area which it occupies even though cleared of trees maintains a very secluded and secretive atmosphere. The inscriptions though faded a little by time and erosion are still evident enough. It is difficult to determine the purpose of the stone, it may have been a grave marker or perhaps a declaration of land ownership, we may never know. But here it stands mysteriously after all those centuries retaining its secrets. Just adjacent on its West side lies a lump of rock embedded in the ground that  may possibly have once been a part of the stone that broke away.
Just to prove the point that it is always safer to follow warnings we had noticed that a tent was posted in the near woods but we didn't think anything of it until there was a hurried rustling in the trees beyond the stone and the sound of voices. Almost immediately five camouflaged figures emerged from the woods brandishing machine guns! We thought it might be a good idea to make a run for the track but as soon as we made a move a voice shouted "Its alright folks, we're just havin' an exercise here, sorry didn't mean to frighten you" It was an Army sergeant and some troops and apparently we were OK where we were as it was outside the boundary of the range. At the point though we thought it might be time to head back to the car!
I would highly recommend a viewing of this monument if you find yourself in the area. It is one of the most unusual stones you will see in this country. Don't be put off by our adventure as the stone is as mentioned situated outside the range, but if there's a sentry on duty it might be wise to ask anyway in case there are any activities in place. Also be careful of the ground underfoot around the general area of the stone as there is a lot of debris from felled trees making it a bit crunchy and uneven in places.

Below is a diagram of the Ogham Alphabet for those interested in deciphering.

To find the Knickeen stone, take the exit for Donard from the N81 and as you enter the village take the left hand road off the main street at the corner shop/post office, then turn right down the road opposite Toomey's Bar. Drive for about 4KM until you come to a fork in the road with a sharp right turn and a bungalow and some sheds on the left. Take the narrower left hand road that faces you and drive for about 2.5KM until you reach a forest crossroads. You will spot the sentry box ahead of you. Park on the left hand road near the barrier.
Posted by Castlehunter at 20:39